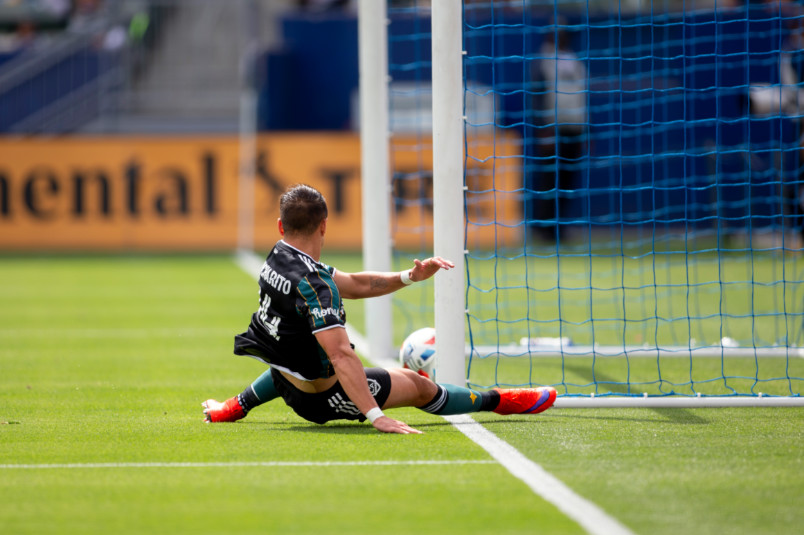 The week 2 roundup starts with Friday’s game. Sporting Kansas City and Orlando City drew 1-1 at Children’s Mercy Stadium. Gianluca Busio scored for Sporting in the 45th with Nani equalizing in the 78th.

On Saturday, NYCFC shutout Cincinnati 5-0 at Yankee Stadium. Jesus Medina opened the scoring in the 6th minute. An own-goal doubled the lead in the 53rd with Gudmundur Thorarinsson in the 57th. Valentin Castellanos made it 4-0 in the 67th with Medina scoring again in the 83rd.

Nashville and Montreal drew 2-2 at Nissan Stadium. Mason Toye scored for Montreal in the 13th with Zachary Brault-Guillard doubling the lead in the 42nd. Nashville’s Jhonder Cadiz pulled a goal back in the 54th with Hany Mukhtar equalizing in the 77th.

Toronto and Vancouver drew 2-2 at the Wide World of Sports Complex. Luke Singh scored for Toronto in the 7th minute with Cristian Dajome equalizing from the penalty spot in the 55th. Andy Rose put the Whitecaps up in the 70th with Jonathan Osorio equalizing in the 82nd.

San Jose beat FC Dallas 3-1 at home. Oswaldo Alanis converted an Earthquakes penalty in the 34th with Cristian Espinoza doubling the lead in the 49th. Cade Cowell made it 3-0 in the 59th. Ricardo Pepi scored for Dallas in the 79th. San Jose forward Chris Wondolowski saw red in the 89th minute.

LAFC and Seattle drew 1-1 at Banc of California Stadium. Eduard Atuesta scored in the 2nd minute with Brad Smith equalizing in the 54th.

“Hard-fought game,” LAFC coach Bob Bradley said. “I liked our mentality. I felt that the concentration to really stay in the game against a good team was at a high level. I thought we had opportunities in the second-half, had we been able to be a little sharper with the final pass or sometimes our crossing. So,some little things when we get around the box where we just weren’t good enough, creative enough, sharp enough, but overall, it’s a hard game and I still think we came through it with some positives.”

New England shutout DC United 1-0 at home. The difference was a 48th minute own-goal. “It was just a battle,” New England coach Bruce Arena said. “It was a real scrap. I don’t think the referee had a good feel for the game. There was just too much fouling. I think Carles Gil got fouled every time he touched the ball. It made for a difficult game. No flow. Difficult to build our attack. I guess no excuses for us. It’s the same for both teams, but I thought there was too much fouling permitted in the game and it made for a difficult, ugly kind of game.”

Real Salt Lake won 2-1 at Minnesota United. Anderson Julio scored for Salt Lake in the 31st and 41st minutes. Robin Lod pulled a goal back from Minnesota in the 86th.

Atlanta beat Chicago 1-0 at home. Ezequiel Barco scored for United in the 23rd with Luka Stojanovic equalizing in the 46th. An own goal put Atlanta up for good in the 65th with Emerson Hyndman scoring in the 85th.

“Man, it’s tough to lose in a game like that but, you know, obviously Atlanta is a good team. We knew that coming in,” Chicago’s Jonathan Bornstein said. “We knew what we needed to battle, and we put up a good fight there for quite a long time. We got a little unlucky, hit the post a few times but it’s a game of inches. We just came up a little short today. A lot of things to build on. It’s a long season. We don’t want to be losing too many of these, but got to go back, keep working hard and learn from these mistakes and from the loss.”

Inter Miami came back to win 2-1 at Philadelphia. Jamiro Monteiro scored for the Union in the 54th minute. Gonzalo Higuain equalized in the 73rd with Federico Higuain scoring Inter’s winner in the 83rd.

Austin picked up their first MLS win 3-1 at Colorado. Andre Shinyashiki scored for the Rapids in the 36th. Diego Fagundez equalized in the 59th with Cecilio Dominguez scoring in the 67th and 71st.

Portland beat Houston 2-1 at Providence Park. Dairon Asprilla scored for the Timbers in the 6th minute with an own-goal leveling the score in the 28th. Cristhian Paredes put Portland up for good in the 73rd.

In Sunday’s game, once again it was Chicharito for the Galaxy in their 3-2 home win. Chicharito put LA up in the 9th with Andrew Gutman equalizing for the Red Bulls in the 26th. Chicharito scored again in the 41st, finishing off his hat-trick in the 60th. Cristian Casseres scored for New York in the 63rd.