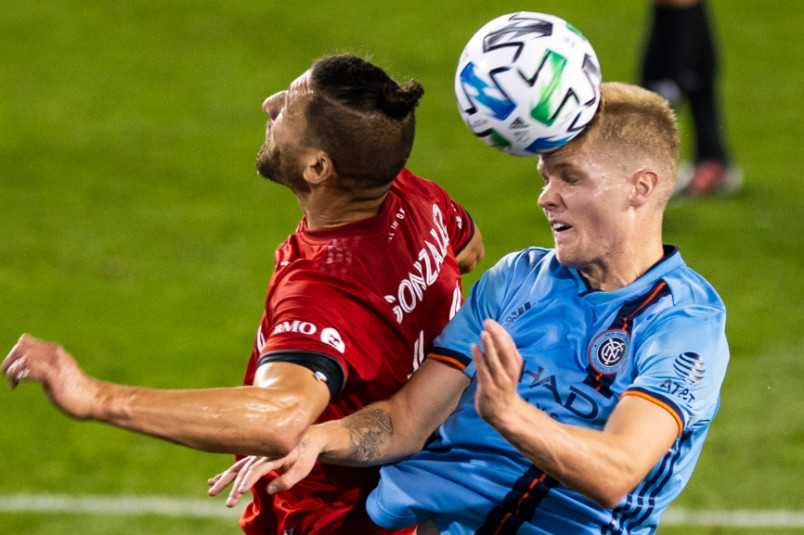 By Jason Davis – WASHINGTON, DC (Apr 2, 2021) US Soccer Players – New York City Football Club is preparing for its seventh season in Major League Soccer. Since entering MLS back in 2015, NYCFC turned itself into one of the better teams Eastern Conference. That means staying in contention and emerging as a legitimate MLS Cup threat over the long-term.

Last season turned on an injury. New head coach Ronny Deila got a rude introduction to professional soccer in the United States. Navigating a strange season got trickier without leading goalscorer Heber, lost to a knee injury in late September.

The new year is shaping up to be difficult but in its own way. Heber continues to recover and likely won’t be available until June at the earliest. The club is also dealing with scheduling complications caused by the pandemic and the late start to the MLS.

From the beginning, NYCFC portrayed itself as “New York’s team.” The marketing took a shot at the club’s natural rival, the Red Bulls, who claimed New York but played in New Jersey. Built into NYCFC’s “Five Boroughs” mantra was an implicit promise. NYCFC would always play in New York.

That posture explains in part of the reaction to the news that NYCFC will play eight games at Red Bulls Arena in Harrison, New Jersey this season. Not only does that mean renting space from NYCFC’s local rival, it serves as a reminder that the city club is also renting space at its “home” stadium in The Bronx.

Yankee Stadium was never supposed to be the long-term home of New York’s expansion team. Seven years into the team’s existence, however, it’s hard to blame fans for feeling aggrieved about the stadium situation. There’s no easy fix to the problem. That shouldn’t let the club, or MLS for expanding without a stadium plan, off the hook.

On the field, NYCFC faces a host of questions entering the new season. Among the departures was midfielder Alex Ring, a “heart-and-soul” player who manned the pivot for four years at Yankee Stadium. New York traded him to Austin FC for a significant haul of allocation money. Now they face a difficult transfer market ahead of the season and can’t fully leverage it.

Turning the windfall into new acquisitions may have to wait. In the meantime, no one is lowering expectations. Anything other than a playoff berth and a deep run in the postseason will be a disappointment.

Deila gave NYCFC fans a peek at the future in his first season in charge. While Ring was still a key figure for the club as it navigated a path to the quarterfinals of MLS Is Back and an MLS Cup playoff berth, the new coach turned to a midfield combination of Keaton Parks and James Sands with greater frequency. Ring’s trade means that the young Americans will have the bulk of the NYCFC midfield minutes to themselves for most of the 2021 season.

Parks is the more box-to-box of the pair, with Sands better suited to playing a holding midfield role. Between them, Parks and Sands have a total of four seasons as established professionals. For Deila to rely so heavily on players so young speaks to their talent and their potential. The trust they’ve earned in New York also bodes well for their international futures. Sands has been in the US Youth National Team setup, while Parks has a cap with the senior team earned in 2018.

In a season that will again stretch rosters and force head coaches to use all of the available depth, Parks and Sands will need help. Well-sourced reporting puts US international Alfredo Morales on his way to New York to add another option for Deila. Morales is a veteran of German soccer, collecting over 200 appearances between FC Ingolstadt and Fortuna Dusseldorf.

NYCFC’s new American influence in the center of the field is a departure from the club’s first six seasons. The club famously started life in MLS with a pair of European stars in midfield in Frank Lampard and Andrea Pirlo. Injuries marred Lampard’s time with the club. Pirlo struggled to find his form in a new club playing in an effort-focused league. Still, the signing of players with such impressive resumes pointed to a spend-happy future for the new club in the country’s largest market.

Instead, NYCFC soon changed tack, shifting the bigger money into the attack and bringing in less-heralded internationals to man the center of the formation. Ring and Yangel Herrera pushed the team to new heights under coach Patrick Vieria. That partnership continued to pay dividends into the Torrent era. Midfielder Ebenezer Ofori added 4,000 minutes between 2018 and 2019.

NYCFC posted a Q&A with CEO Brad Sims this week, largely to answer questions about the home schedule. Sims also addressed the club’s level of ambition. Following the departure of Romanian attacker Alexandru Mitrita in 2020, NYCFC enters 2021 with an open Designated Player spot.

Sims said the team intends to use all of the available roster designations at its disposal while also pointed to the slow market for players in the complicated pandemic environment. With the resources of City Football Group behind the club, NYCFC sitting on an open DP slot seems strange.

Time will tell if NYCFC has entered a new, more budget-conscious, era or if the shift is momentary. Even if City Football Group chooses to invest in its American outlet and give sporting director David Lee the funds to sign another high-priced player, the front line and depth slots in the midfield appear spoken for.

Parks, Sands, and potentially Morales will get help from a set of young midfielders that includes Nicolas Acevedo, Gedion Zelalem, and homegrown signing Justin Hak.

Uncertainty is the theme of 2021 across MLS. That includes in New York, where what is meant to be one of the League’s flagship clubs is working through a change in identity. Off the field, that means dealing with displacement and a fan base upset by the realities of tenant life. On the field, it means fully steering into a new era where a pair of talented young Americans will determine so much of the club’s success.