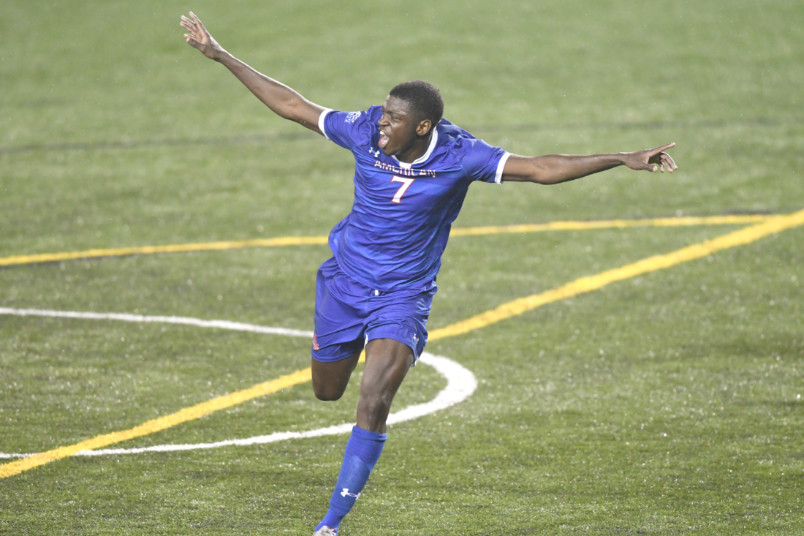 By Charles Boehm – WASHINGTON, DC (Apr 30, 2021) US Soccer Players – The NCAA men’s and women’s soccer tournaments kick off this week. It’s a few months late and comprises a smaller field than usual, due on both counts to the disruptions of COVID-19. The lingering pandemic has also led to both events being held entirely in the state of North Carolina, culminating in the College Cup finals at WakeMed Soccer Park in Cary. Nine venues across the state will host the matches. That’s to make timing and logistics more manageable amid the ongoing need to reduce the risks of exposure and spread.

It’s a testament to persistence and resilience that these tournaments are taking place at all. College soccer lacks the financial incentives that allowed professional sports and its wealthy NCAA siblings gridiron football and basketball to play through the pandemic. It’s also been slowly, steadily drained of a good chunk of domestic talent by the rise of pro academies over the past decade or so. The institutional indifference of the NCAA itself has impeded efforts to update or reform it in light of that.

Yet the college game marches on. It continues to offer a different kind of experience as well as a haven for unpolished gems and late bloomers. The best of them continue to earn contracts and playing time in MLS and USL. In that light, it’s fitting that one of the Cinderella stories in this year’s men’s tournament field is American University and their star striker, a 24-year-old junior from Senegal named David Coly, who’s helped the Eagles end a 17-year postseason drought.

Coly is a transfer from the University of Washington who began his NCAA career way back in 2015. Having moved Stateside during adolescence when he gained admission to the prestigious Mercersburg Academy in Pennsylvania, Coly was well underway on building his own version of the American dream on Puget Sound when he flew home to Dakar for the winter holidays in December of 2016.

Strong and quick with a nose for goal, Coly had just finished his second college soccer season with the Huskies, where “he really came into his own,” in the words of head coach Jamie Clark. UW had finished second in the PAC-10 and advanced into the third round of the NCAA tournament. A productive summer stint with the Under-23 side of USL club Harrisburg City Islanders seemed to hint at future pro possibilities.

Coly also fell in love, having met his girlfriend and future wife Nora when he got a knock on his dorm room door one night.

“She lived in the room below mine,” Coly said in a recent conversation with USSoccerPlayers.com. “I was making a lot of noise, kicking some soccer balls, and she came upstairs being like ‘hey dude, can you be quiet for a little bit? I’m trying to study.'”

The feel-good story shuddered to a halt when he got a call from the US embassy in Dakar ahead of his scheduled appointment to renew his student visa, however. An outage in the US government’s processing system a few months prior had led to his visa expiring while he was in Washington taking summer school classes. Coly was called in to the embassy and grilled by staffers who accused him of manipulation and deceit.

“Why did you do it? Why did you break the rules?” he remembers them asking. “And I got stuck at home.”

Though he’d been living in the United States for many years at that point, Coly found himself in limbo. He filled out forms, sent emails, made calls and appointments. UW hired a lawyer to help him navigate the bureaucratic labyrinth of US Citizenship and Immigration Services. But definitive information was elusive.

“The first year was really tough, because I already came to America, started a life, started settling down here,” said Coly. “Now I have to re-start all over again at home, where nothing is secure, everything is up in the air.”

It was impossible to ignore the broader context. Donald Trump had just pulled off a shock victory in a presidential election where immigration was a hot-button issue. Trump had campaigned on a proposal for a “total and complete shutdown of Muslims entering the United States.” Coly and UW’s coaching staff believe his case got swept up in that tempestuous moment.

“There seemed to be a strong timeline correlation between exactly when everything went down with immigration visas and the Trump administration and him going home,” recalled Clark. “It could not have been a worse time that way – a crackdown, a black Muslim guy from an African country. That sadly ticked all the boxes to be a red flag, for reasons that are not mine or his, but that was the political outlook at that time.”

One year passed, then another. He played pickup soccer in Dakar and made occasional trips to Europe, where he could visit members of his extended family and watch his favorite club team, Paris Saint-Germain. Clark held his scholarship slot for him as long as he could.

“It just felt like he couldn’t get answers about the hows and whys and what was really going on,” said Clark. “You’re kind of helpless as a coach in the situation, but you’re just like, ‘hey, we’ll stick with you, let us know what you need.’ And it just kept on going and going.”

When it appeared that the path to another student visa was blocked, Coly and Nora decided on an alternate route. They took the plunge and got married in Senegal. That set off another blizzard of paperwork, and more waiting. By this point, he’d become an expert of sorts, fielding queries from other international students experiencing their own travails in the US system.

“I went back and forth with the embassy a LOT,” he said with a laugh.

Finally, nearly three years into his ordeal, a breakthrough arrived in October 2019. Officials recognized the authenticity of his marriage and issued a 10-year green card that put him on the path to full US citizenship. Though Clark could no longer offer him a spot on UW’s roster, he helped him look for a new school where he could finish his studies and make an impact on the field.

Seattle University was ready to welcome him, but joining the Huskies’ crosstown rivals felt “kind of weird.” So he moved again, this time finding a new home with American, a program seeking a revival under new coach Zach Samol after years in the doldrums. By the time Coly arrived in DC, COVID had imposed itself on the planet, forcing AU athletics to shift schedules on a dime depending on test results. But Coly and his teammates rolled with the punches and mounted an underdog run to their program’s first Patriot League championship since 2004, Coly earning tournament MVP honors with some key goals.

On Thursday night, he kept it going, scoring the opening goal in the Eagles’ dramatic shootout win over Jacksonville in the first round of the NCAA tourney. On Sunday, they’ll face top-seeded Clemson.

There’s an argument that the overall quality of Division I soccer has held steady or even improved despite the absence of homegrown players who’ve gone straight to the pros. International student-athletes like Coly are a big factor. Some analysis places the number of foreign students in D1 men’s soccer at upwards of 30%, even with programs that choose not to recruit overseas because of the additional complexity it brings.

Some contend that this diminishes possibilities for domestic players. Others welcome the competition and diversity it creates. It’s clear that in Coly’s case, that old idea of the United States as a land of opportunity still holds power, even deferred for those three painful years. Though his age would be seen as a drawback, Clark thinks he’s got the tools to make it at the next level. Coly will take that as it comes.

“Now that I’ve seen the world and how things can switch, I’m honestly not making any plans or putting anything in my head. I’m just going with the flow,” he said.

In the meantime? He’s working on a political science degree and applying for internships at several embassies. That includes the same US outpost in Senegal that he got to know so well.

Logo courtesy of The Super League