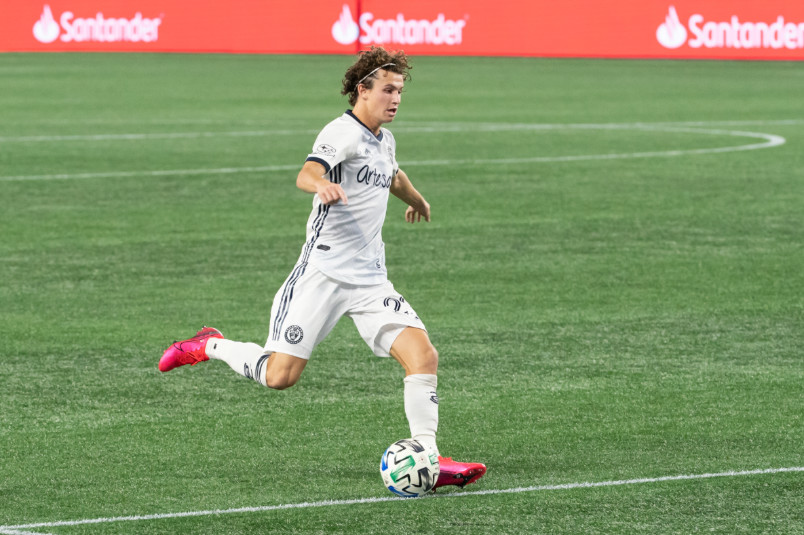 By Jason Davis – WASHINGTON, DC (Apr 16, 2021) US Soccer Players – The odd thing about progress is that it’s not always permanent. The phrase “one step forward, two steps back” exists for a reason. Gains often come just ahead of regression. Bad habits can undo even the best of intentions, retreating to the comfort of old ways.

With that in mind, MLS begins the 2021 season facing a test. After last year’s leap with young players across the competition earning significant playing time, a return to a more conventional schedule could mean something of a backslide.

It would be easy to presume that MLS has simply turned a corner when it comes to this issue. It was nearly three years ago, after all, that Don Garber stated explicitly that MLS wanted to be “selling league.” After several high-profile defections from MLS academies with clubs receiving nothing as compensation, the pressure to get a return from developmental investment forced a change in mentality.

Players who can secure a transfer before stepping foot on an MLS field are few and far between. Young players need playing time and preferably plenty of it. Not only do those minutes help a young player refine his game, but it also puts them in the shop window for potential suitors from around Europe.

The level of interest in American players, spurred by the contributions of players like Christian Pulisic, Weston McKennie, Tyler Adams, and Giovanni Reyna in Champions League clubs, has never been higher.

Working in favor of giving young players opportunities is the success of players who made their European moves this winter. Every player needs a period to adapt to a new team, a new league, and a new culture. The young MLS products now in Europe are proving that Americans are capable of adjusting quickly.

Brenden Aaronson hit the ground running in Austria with Red Bull Salzburg after his breakout year with the Philadelphia Union. In just under 800 minutes played for the reigning Austrian champions, Aaronson has two goals and three assists from his position on the left-wing. It’s not difficult to imagine him making a move to a bigger club in a higher profile league soon. That eventuality will be further proof of concept for Major League Soccer and put more money in the Union’s pocket.

While every American fan wants to see American products go directly to the top level of the club game, it’s potentially more transformative for MLS that clubs a tier down from the elite are eying players from this side of the Atlantic. Just as MLS is attempting to do with ambitious players from South America and beyond, second-level European clubs do good business as stepping stones to the biggest clubs on the Continent. Play your kids, because they can pay off… more than once.

MLS is in the middle of equalizing its approach to young players, both foreign and domestic. An announcement this week of the league’s new U-22 initiative outlined a plan for incentivizing clubs to invest in young players. It’s specifically a way for MLS to increase revenue from outgoing player sales.

Teams can now leverage expanding scouting networks to sign high talent players without damaging their ability to build a complete roster. The most significant element of the new designation is that transfer fees will not count as part of the budget charge of a player. That leaves more space for the rest of the squad.

On the eve of 2021, positive signs abound that teams intend to give young players ample minutes. More importantly, they’l ask them to carry the team in key areas of the field.

MLS is not a league that often turns to Americans to be the central playmaker in the attack. The number of true #10 type players of American vintage who made a name for themselves in MLS is small. Even those that stand out in the league’s recent history, Sacha Kljestan, Lee Nguyen, Benny Feilhaber, perhaps Landon Donovan, predate the MLS academy structure.

At least two teams figure to hand the bulk of the creative responsibility in the middle of the formation to academy-bred teenagers this season.

The first is Gianluca Busio, a Sporting Kansas City academy graduate who has already been a professional for three seasons. Busio’s arrival in the senior team in Kansas City was a big deal, one that would likely take him to Europe. Still just 18, Busio spent much of 2020 manning a deep-lying role in Sporting’s formation. The position limited his output on the attacking end of the field, where he registered a single goal and three assists.

Sporting coach Peter Vermes will deploy Busio higher up the field in 2021. Busio will be directly involved in creating chances for a club expecting to compete for an MLS Cup title. By fostering Busio’s confidence through a steady rise in his minutes from 2018 through 2020, Sporting prepared him for a job few Americans, and fewer American teenagers, get. Should Busio succeed in his new role, the sky’s the limit for his future and Sporting’s bottom line.

The New York Red Bulls already know that their young, talented #10 isn’t long for the club or Major League Soccer. Teenage sensation Caden Clark, a player who burst onto the scene in 2020 and scored in his playoff debut against Columbus, is reportedly set to move to RB Leipzig at the end of the year.

While he’s here, New York intends to use his full talents. Coach Gerhard Struber got a look at Clark after arriving late in the 2020 season. Now that playmaker Kaku is off in Saudi Arabia, Struber doesn’t have much of a choice but to rely on the not-yet-18-year-old Clark.

Young players should feature in every area of the field in 2021. Given how much academies cost investor/operators, maybe things were always headed in this direction. The looming question is whether coaches will use the young talent available to them, or if the return to something of a normal season will push them to trust those players less. The league is rife with new head coaches who need to impress in their first seasons on the job.

No one imagines MLS will go back to the days when young players struggled to get on the field. If for no other reason than to justify the costs of running academies, youth will be served in MLS. What’s we’ll learn in 2021 is whether the new season is the next step forward or a small step back.