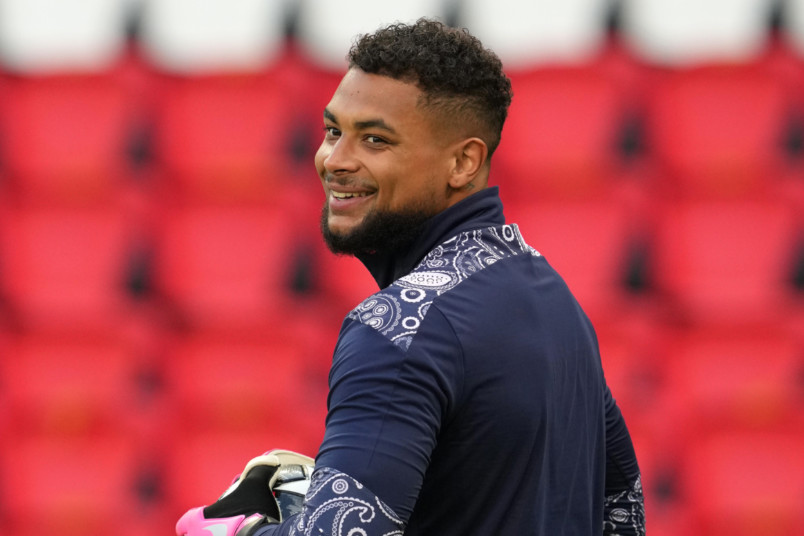 Thursday’s soccer news starts with another USMNT player’s club advancing in the Champions League. Zack Steffen was on the bench for Manchester City’s 2-1 first-leg win at the Parc des Princes. PSG went up in the 15th minute with Kevin De Bruyne equalizing in the 64th. Playing a man up from the 77th, Riyad Mahrez scored for City in the 71st minute. The series concludes in Manchester on May 4.

“When you play knockout stages, semifinal first-leg, the players are thinking about not losing,” Manchester City manager Pep Guardiola said. “You can’t win qualification in first-leg, but you can lose it. So, I understand the players. Sometimes you feel not comfortable. But we spoke at half time and adjusted a few little stupid things, not important things. It depended on the players.”

Elsewhere in Europe, Brenden Aaronson subbed out at halftime of Red Bull Salzburg’s 1-1 home draw with Wolfsberger in the Austrian Bundesliga. An own-goal put Wolfsberger up in the 68th with Karim Adeyemi equalizing in the 86th minute. Julian Green subbed out in the 58th minute of Furth’s 3-2 home win over Sandhausen in the 2.Bundesliga. Hans Nunoo Sarpei scored for Furth in the 6th minute. Sandhausen responded with goals in the 36th and 52nd. An own-goal leveled the score in the 77th with Branimir Hrgota scoring Furth’s winner in the 86th minute.

In the Concacaf Champions League, the Columbus Crew drew 2-2 at home with Monterrey in the opening leg of their quarterfinal series. Trailing from a 9th minute goal, Pedro Santos equalized for the Crew in the 65th with Lucas Zelarayan giving them the lead in the 87th. Monterrey equalized three minutes into stoppage time. Columbus coach Caleb Porter took issue with several calls during his post game press conference, saying “Why don’t they get the officiating sorted out? It’s a joke. Shame on Concacaf.” The series concludes at Monterrey on May 5.

Portland’s Felipe More converted a penalty seven minutes into stoppage time to draw 1-1 with Club America at Providence Park. Club America took the lead through a first-half stoppage time penalty. “Yes, at some moments it got a little bit more competitive from both sides, but overall, I think it was a great matchup and a great game,” Timbers coach Giovanni Savarese said. That series concludes at Estadio Azteca on May 5.

Also in the soccer news, Jesse Marsch will move from Red Bull Salzburg to RB Leipzig next season on a two-year contract. The hire makes Marsch the American coach with the highest profile club job in European soccer.

“Jesse has been part of the Red Bull football group for over six years now and has done incredible work in all his roles so far, constantly developing step-by-step,” RB Leipzig CEO Oliver Mintzlaff said. It’s of course a great advantage that he already worked for a year at RB Leipzig. Jesse knows the club, the city of Leipzig and, above all, the club and playing philosophy. Alongside his qualities as a coach, Jesse is characterised above all by his positively ambitious style, which he uses to motivate and engage the people and around the club.”