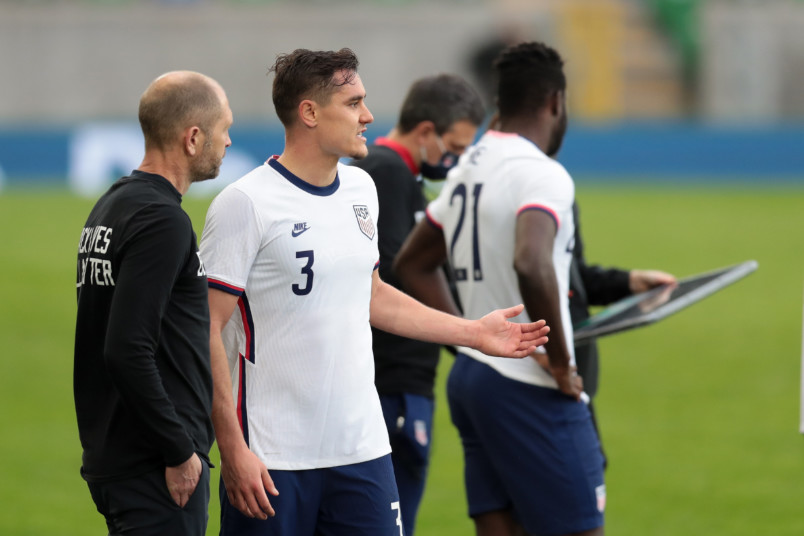 By Jason Davis – WASHINGTON, DC (May 19, 2021) US Soccer Players – Tuesday morning brought the grim news that New York Red Bulls and USMNT defender Aaron Long underwent surgery to repair a torn Achilles tendon suffered in the Red Bulls’ 1-0 loss to the Philadelphia Union on Saturday. The expectation is that Long will miss the remainder of the 2021 Major League Soccer season. That means Long will also miss the USMNT’s upcoming matches against Switzerland, in the Nations League, and in World Cup qualifying later this fall. To say that’s a big blow to the Americans and their efforts to win the Nations League and start qualifying on the right foot would be an understatement.

USMNT head coach Gregg Berhalter will now look to other options to pair with stalwart John Brooks in the center of the American backline. It’s probable, perhaps even likely, that he will turn to several different players to fill the void left by Long. First things first, though. Everyone wants to see the 2018 MLS Defender of the Year back on the field and ready to contribute as soon as possible. The fact remains, however. Long being out means someone else will get a chance to rise into a position of prominence with the USMNT.

Several of the United States’s top center back prospects play in Major League Soccer. While still young and developing, there’s a class of talented players making a case for inclusion in Berhalter’s 2021 plans. History tells us that one or two might even manage to work their way into a possible 2022 World Cup roster.

Chief among the group is Atlanta United’s Miles Robinson. The 24-year-old’s trajectory to regular starter in Atlanta played out over several seasons, from the very beginning of the team’s existence in MLS. Robinson was the club’s first-ever draft pick, a number two overall choice out of Syracuse University.

In an era of the country’s elite talent most often working their way through an MLS academy, players emerging from college soccer with national team futures is something of an anomaly. In Robinson’s case, the Massachusetts native turned into a top pro prospect after two stellar seasons with the Orangeman.

Long’s journey to the USMNT is a reminder that there is more than one path, even at this late stage of professional player scouting and development in the United States. For every Chris Richards, a gifted athlete with advanced soccer abilities who jumped from club soccer in Alabama to a pro academy in Dallas then onto Germany via transfer while still not yet a pro, there are scores of players who won’t get the same chance.

Long famously emerged from college at the University of California Riverside as a lightly regarded midfielder. Drafted by the Portland Timbers in the second round of the 2014 MLS SuperDraft, he bounced from Portland to Seattle and finally to the Red Bulls. That’s where he got the chance to prove his abilities as a converted center back in the USL. He won Defender of the Year in the USL. Two years later, he won the MLS version of that award. His MLS success not only earned him the interest of clubs in Europe, but it also put him into the picture for the USMNT.

Robinson’s career held more promise from the start, but he too needed seasoning in the USL before getting his chance to play in MLS. A year spent on loan with the Charleston Battery in 2017 and a season playing with Atlanta’s reserve unit led to his promotion to the first team for 2019. Two years later, Robinson is a starter for a club with MLS Cup ambitions.

The 24-year-old’s skill set makes him a strong candidate for Berhalter’s national team approach. Among MLS center backs, according to StatsBomb, Robinson is in the 93rd percentile for passes attempted and in the 92nd percentile for progressive passes. Berhalter’s emphasis on ball-playing center backs, equally adept at pushing the ball forward and moving it into the attack in areas of the field the United States can exploit, is a central theme of his approach.

Robinson presses well, another key feature of Berhalter’s tactics. His stats in that area of the game place him in a category of young Americans who appear primed for bigger things. There’s a player just 15 days older than Robinson who sometimes escapes attention.

Justen Glad has already collected 130 MLS appearances during a career that began in 2014 when he signed as a Homegrown player out of the Real Salt Lake academy. The Pasadena, California-born center back didn’t follow the same path as Robinson, choosing to make the academy jump to RSL’s then-Arizona-based program back in 2012. As a high school player in Tucson, Glad attracted the attention of RSL scouts and worked his way to a professional contract by his 17th birthday.

The longer resume makes judging Glad as a potential national team contributor more complicated. His presence in the US U23 team that vied for an Olympic berth in Honduras speaks to his profile in the national team program. Robinson missed out on that effort because Atlanta chose not to release him.

Glad’s numbers compare favorably to Robinson’s. Like his Atlanta-based contemporary, Glad is strong pushing the ball forward from the back. He defends well. When RSL head coach Freddie Juarez plays Glad, the club is invariably better at the back.

From Robinson and Glad, the younger set of MLS center backs are still growing into pro careers and the possibility of national team call-ups. Whether the likes of Mauricio Pineda or Henry Kessler become full internationals is tough to say. What is clear is that both are talented players worth tracking on their way through the 2021 season.

Pineda and Kessler are second-year professionals. Pineda signed with the Chicago Fire on a Homegrown contract but played four years at the University of North Carolina before moving to MLS. As a rookie, Pineda started every game of the Fire’s campaign, garnering praise for his athleticism and ability on the ball.

Pineda can also play as a midfielder and has featured more in that role so far in 2021. The Fire’s injury issues have exacerbated problems with the roster, meaning Pineda is needed more in midfield.

Kessler has picked up in 2021 where he left off in 2020. Less an on-the-ball player than the rest listed here, Kessler’s pure defensive ability makes him an intriguing prospect. The 22-year-old is already a fixture of a good Revolution team and will only garner more attention as the season moves along.

What this means is that Berhalter has options and enough spaces on the schedule to use them. With the USMNT coach already making it clear he plans on using different versions of the squad this summer, he has the space to experiment. That doesn’t make it any less of a loss that the National Team now moves on without Aaron Long.