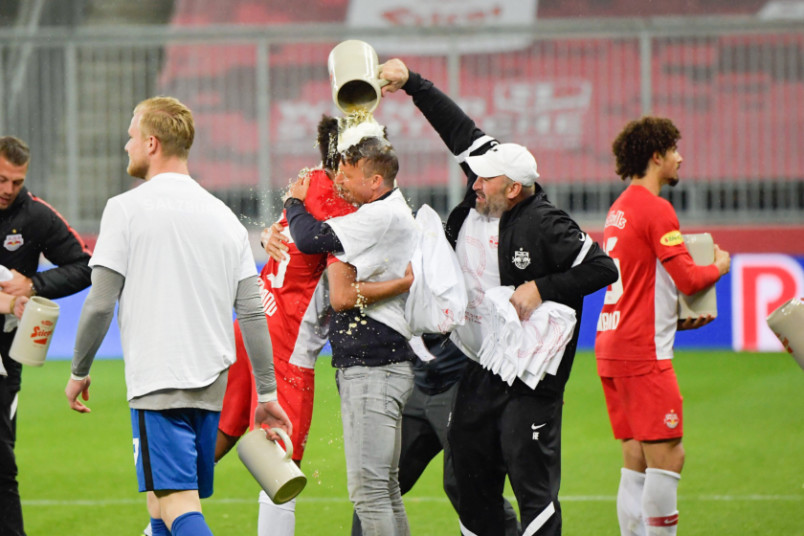 Thursday’s soccer news starts in the Austrian Bundesliga. Brenden Aaronson subbed out in stoppage time of Red Bull Salzburg’s 2-0 home shutout of Rapid Vienna to win the league title. Patson Daka scored in the 33rd and 56th minutes. Rapid Vienna played a man down from the 86th minute. Red Bull coach Jesse Marsch will make the move to RB Leipzig with two Austrian Bundesliga titles and two Austrian Cup wins with Salzburg doing the double in both of his seasons in charge.

“It’s my second one, I won one at my old club,” Aaronson said, referencing Philadelphia’s Supporters’ Shield. “But it’s an amazing feeling. It’s the third one in a year which is crazy, and I’m so happy. The work that we put in, it’s just great and I’m so happy (teammate empties giant stein of beer on him). “As you can tell, it’s awesome. I mean it was a tough game, they came out and played well. Super happy and proud of the team. We got the goal and then we went from there. I think we played well.”

Christian Pulisic’s Chelsea lost 1-0 at home to Arsenal. The goal came in the 16th minute. Pulisic headed in a corner in the 61st minute but VAR ruled the would-be equalizer offside. Chelsea is in 4th-place in the Premier League with 64 points from 36 games. They trail 3rd-place Leicester City by two points and are six points ahead of 5th-place West Ham who has a game in hand.

“It’s totally our fault, nobody else’s, it’s totally our responsibility,” Chelsea manager Thomas Tuchel said. “We had huge chances, we made more or less an own goal, a total gift and we could not score from our biggest chances, but overall we were not sharp enough… We could not put up the same intensity and energy as usual so maybe it was too many changes from the last match and I take full responsibility also for that. Maybe it’s the last wake-up call for all of us.”

Weston McKennie subbed on in the 80th minute of Juventus’s 3-1 win at Sassuolo in Serie A. With Juventus goalkeeper Gianluigi Buffon saving a penalty in the 16th minute, Adrien Rabiot put Juve up in the 28th with Cristiano Ronaldo scoring in the 45th. Sassuolo pulled a goal back in the 59th with Paulo Dybala scoring for Juventus in the 66th minute. Bryan Reynolds was on the bench for Roma’s 3-1 loss at Inter Milan. Down two goals, Henrikh Mkhitaryan scored for Roma in the 31st. Inter added a third goal in the 90th minute.

Yunus Musah subbed on in the 82nd minute of Valencia’s 1-0 loss at Sevilla in La Liga. The goal came in the 66th minute. Valenica is in 14th-place in the table with two games remaining. Matt Miazga’s Anderlecht drew 1-1 at KRC Genk in Belgium. Anouar Ait El Hadj scored for Anderlecht in the 33rd with Paul Onuachu equalizing for Genk in the 67th minute. Mark McKenzie was on the bench for Genk.

Moving to Major League Soccer, Toronto shutout Columbus 2-0 at Exploria Stadium. Michael Bradley opened the scoring in the 13th minute with Jozy Altidore doubling the lead in the 87th. Alex Bono kept the clean sheet with three saves. Philadelphia drew 1-1 with New England at PPL Park. Teal Bunbury put the Revs up in the 85th with Kacper Przybylko equalizing in the 88th.

CF Montreal beat Inter Miami 2-0 as the away team at their shared stadium in Fort Lauderdale. Bjorn Johnsen scored in the 14th and 25th minutes with James Pantemis keeping the clean sheet. The game experienced a lightning delay. On the west coast, Seattle shutout San Jose 1-0 on the road with an 18th minute goal from Cristian Roldan. Seattle goalkeeper Stefan Frei had to exit with an injury in stoppage time with Alex Roldan finishing the game in goal.

SI’s Avi Creditor recaps the Marsch era at Red Bull Salzburg. SBI’s Franco Panizo looks at the tactics Inter Miami is using. The Columbus Dispatch’s Jacob Myers with the timeline for Columbus announcing its rebrand. The Minneapolis Star-Tribune’s Jeff Day reports on a change in ownership at Orlando City. AFP’s Daniel Merolla with questions about the Copa America going ahead as scheduled.