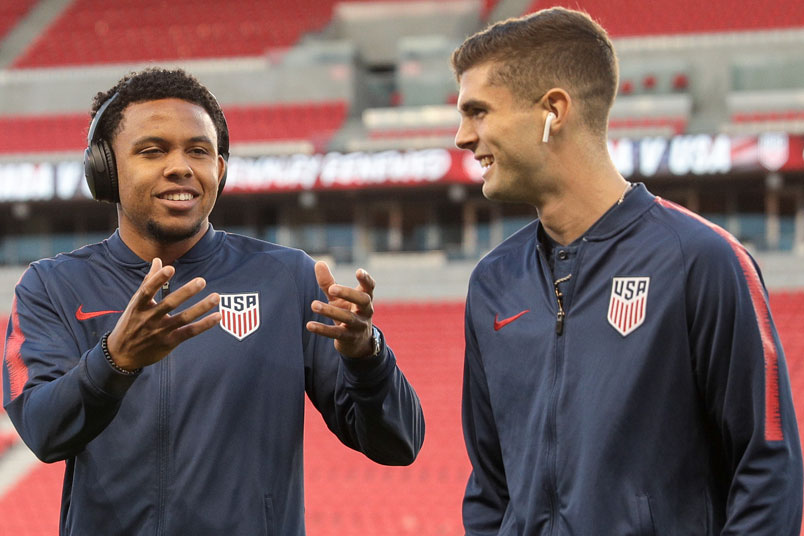 By Clemente Lisi – NEW YORK, NY (May 24, 2021) US Soccer Players – There is no doubt that things have changed for the American soccer player. The professionalization of the youth and academy systems over the past decade has resulted in a plethora of young talent. That talent is now playing across a variety of European leagues every weekend and midweek in the Champions League.

We’ve set a limit of just five Americans, but these are highlights from a much longer list. You could probably field a starting IX of US players who had a great season over the past nine months. Americans are no longer playing for mid-tier clubs in Europe. In many cases, they are starting for big-name teams like Barcelona, Chelsea, and Borussia Dortmund. No longer are they on the fringes of making the first team. In a growing number of examples, Americans are the stars.

American soccer players will make history this Saturday in the Champions League with Chelsea striker Christian Pulisic and Manchester City backup goalkeeper Zack Steffan on both sides of the final. It’s been a long time since there was an American connection in the final, but it comes less than a year after Tyler Adams’s RB Leipzig made it to the semifinals.

This is all great news for American soccer. The long-term aim is for these talented players to shine and make for a very strong National Team. This summer will be a particularly busy time for the US on three fronts: Concacaf Nations League, Gold Cup, and World Cup Qualifying. With the European domestic season coming to a close, here’s a look at five Americans who shined in Europe this season.

The Chelsea winger had a rough patch midway through the season, but he’s proven to be an indispensable part of the club. Chelsea has battled on many fronts over the last few months but has yet to win a trophy after losing the FA Cup final on May 15 to Leicester City. The 22-year-old star has six goals and four assists so far across all competitions this season, helping Chelsea to a 4th-place finish and a spot in next season’s Champions League.

While those numbers don’t tell the entire story, Pulisic will have to come up big this Saturday. Win the Champions League, and the season will go down as a legendary one for Pulisic and the club. A loss in the final and the entire season could be considered a disaster. That zero-sum game is one way to look at Pulisic’s season. Another way is that Pulisic has finally come into his own. This season could just be the start of a decade of success for him.

The other American who can make history on Saturday is Steffan. The 26-year-old goalkeeper, who has been a backup at Man City this season, has managed to make 12 appearances across all competitions. Clubs like Manchester City, playing in several competitions, need strong goalkeepers. Steffen’s opportunity came in the League Cup, where he helped his club to the trophy. The US has a long tradition of standout keepers in the Premier League. Steffan has lived up to the hype since signing with Manchester City in 2019.

It’s not likely Steffan will see action on Saturday, but that shouldn’t take away from the accomplishment should Man City win the Champions League. The Premier League champions would capture their first Champions League should they beat Chelsea.

McKennie has also had a successful season after making a high-profile loan move that his play made permanent. He proved that he could be a major contributor on a team stacked with superstars, scoring six goals and adding three assists across all competitions this season. Now on a three-year deal with Juventus, he’s become a pressure player well aware of the expectations at this type of soccer club.

Though Juventus slipped to 4th-place after dominating Serie A for nine seasons, McKennie did come away with some silverware. He helped Juve win the Coppa Italia last Wednesday against Atalanta, and they took the Supercoppa Italia earlier this year. On Sunday, he was part of the squad that edged out Napoli for the final spot in next season’s Champions League. It may have been a tough season for Juventus overall, but McKennie proved he belonged in Serie A.

Americans continue to make a name for themselves in the Bundesliga, and at the front of the pack is Reyna. The 18-year-old attacking midfielder helped Dortmund win the DFB Pokal this season, yet another budding US star to nab a trophy. Reyna had seven goals and seven assists in all competitions this season, three of those goals coming in the run-up to the DFB Pokal title.

Like Pulisic and McKennie, Reyna played in the Champions League this season. Alongside Erling Haaland, he was part of one of the most entertaining attacks in the tournament. With Dortmund’s stars attracting interest from even bigger clubs, this could be a transitional summer. Regardless of what happens, the future remains bright for Reyna. This season was yet more proof of what he can do at the highest level.

A talented midfielder, Aaronson made a name for himself by helping Red Bull Salzburg win the Austrian league title. The former Philadelphia Union prospect joined the team coached by Jesse Marsch in January. Over the past four months, Aaronson scored seven goals and added five assists in all competitions. He played in 20 league games and proved to be a key contributor to Salzburg’s title run down the stretch.

Aaronson has a contract with Red Bull Salzburg that extends to 2025. Marsch, meanwhile, will leave Salzburg after four years to become head coach at RB Leipzig in Germany, where he previously served as an assistant. Marsch has shown American coaches how to transition from MLS to Europe and create even bigger opportunities. Aaronson is in a position to do the same as a player.