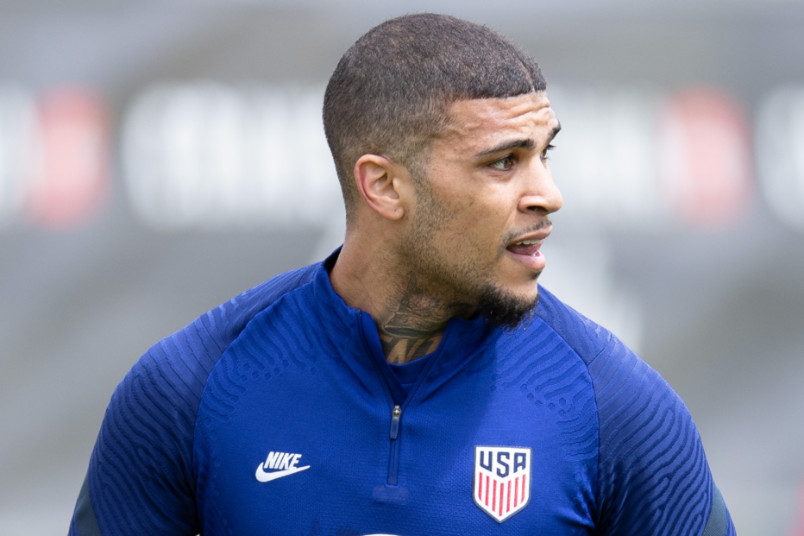 By Jason Davis – WASHINGTON, DC (May 28, 2021) US Soccer Players – American soccer’s velocity is increasing. The generational churn is changing how coaches and fans alike think about player roles in the USMNT. It wasn’t that long ago that a 27-year-old would be right in the middle of the age plot for a national team roster. The USMNT has always relied on players with experience, meaning players in their late-20s and older were common in the team. That’s not so much the case anymore.

The average age of the USMNT roster for the Nations League finals in Denver is a fresh-faced 23 years old. The team features players who are only in the nascent stages of their professional careers. If you’re over 25, you’re the old man of the bunch. DeAndre Yedlin is one of those “old men.”

The quotes are necessary because Yedlin isn’t old by any reasonable measure. The Galatasaray fullback is just 27, smack in the middle of what should be his athletic prime. It’s only because the USMNT possesses a brilliant younger generation of players, and Yedlin being on the scene for so long. That’s a credit to his talent, but things change quickly at USMNT level.

Yedlin’s inclusion in this group is something of a comeback. The last time he appeared in the red, white, and blue was in 2019, when Gregg Berhalter was brand new to the program. Yedlin was still playing for Newcastle United in the Premier League.

The move to Turkey set the stage for Yedlin’s return to the national team fold. With limited minutes at Newcastle, Yedlin needed a restart. He got it in Turkey’s Super Lig. Now, he’s back in a group that features young, rising fullbacks led by Sergino Dest and Reggie Cannon.

“It’s been great,” Yedlin told reporters on Wednesday about getting a chance to return to the field consistently in Turkey. “That’s obviously what we’re in this profession for, is to play. So any time you’re not playing it, it can be a bit of a struggle. Mentally, it can be a bit of a struggle. But just being able to get back playing, getting my form back, getting my confidence back, and then finally to be back as a part of this group has been huge.”

Yedlin’s transfer to Galatasaray landed him in Turkey just as the January 2021 transfer window closed. After featuring in only six league games for the Magpies in England, Yedlin racked up 11 appearances, nine of them starts, to finish the season in Istanbul.

Galatasaray lost out to Besiktas for the Super Lig title, but Yedlin’s performance earned praise. As one of just a handful of Americans to make his way to Turkey, Yedlin’s success stood out even among the rise of young American players across Europe. Now that Yedlin is back in the USMNT picture, he’s getting a chance to play alongside the new generation.

“It’s amazing to see the talent that’s here,” Yedlin said. “The age of some of these players is incredible and how talented they are. I think we’re entering a sort of a golden era for U.S. soccer. So it is really exciting to be involved in it and to have been watching it also. It’s great to see the steps that are being made. You have to give kudos to Gregg (Berhalter) and the staff for really putting this team together because they’ve done a great job.”

The United States’ path back to the World Cup will be a difficult one. Qualifying begins this Fall. Because of the impact of the Coronavirus pandemic on the schedule, it will feature windows with three games played over a single week. That means USMNT boss Gregg Berhalter needs multiple quality options at every position. Because of the difficult environments and mental grind of CONCACAF qualifying, it also means he needs players with experience to help lead the talented new wave of players.

Most of the names on Berhalter’s latest roster haven’t lived through the likes of a trip to Honduras or Costa Rica. Yedlin has. His history with the program might be as valuable as his still prodigious talent.

For lack of a better way of describing it, Yedlin has aged into a leadership role with the national team. That responsibility comes with the territory. For Yedlin, however, leadership can often go beyond age and experience.

“It’s an interesting role,” Yedlin said about being a leader in the team.” You know, I think when you look at any veteran player, that’s kind of the role that you’re expected to play. But you also have to look at the fact you have guys in here, very young guys that are also leaders as well. They’ve been in this system a lot now. I think with this group, there’s just a lot of natural leaders.”

“I don’t think it’s my natural born kind of skill,” he continued. “But you have so many natural leaders here with the younger guys and obviously me coming in as a vet [it’s] kind of pushing myself into that role. There’s tons of leaders on this team, which is great to see because I think you need that, especially when you’re on the field.”

Yedlin’s assessment of the state of leadership in the USMNT should be encouraging to fans. While Berhalter has undoubtedly turned to a few veterans to provide an example and some of the key pieces of the lineup have experience in the ways of Concacaf, the team will need to generate inertia from within the younger group to reach its full potential.

A few years of ups and downs as a professional provided Yedlin with a perspective on the excitement that forms around young players, especially those who make the move to Europe. The bottom line? As the soccer adage goes, if you’re good enough, you’re old enough.

“They’re all in very good teams and very good professional environments,” Yedlin answered when asked about what guidance he could give the younger players. “The second thing is just keeping your head down. I think in our country we have a tendency to really hype up younger players because we’re excited about it, as we should be. The last thing, just have fun with it. The fact that you’re here just says enough, you know what I mean? You’re here for a reason.”

So is Yedlin. More than one.