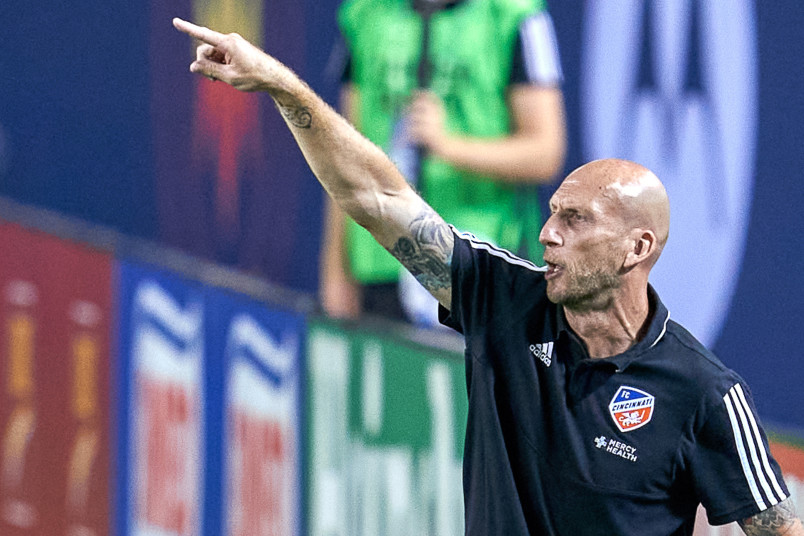 By Charles Boehm – WASHINGTON, DC (May 13, 2021) US Soccer Players – On Sunday, FC Cincinnati will occupy the brightest spotlight for the debut of its brand-new home, TQL Stadium. The visit from star-studded Inter Miami is available nationwide on FOX. That’s priceless exposure for FCC and its glittering $250 million venue in the city’s West End.

With a full roof, intimate sight-lines, all the luxury trappings of modern stadiums, and one of the largest capacities of any soccer-specific facility in the United States, FCC’s new house looks gorgeous. And it should. It was redesigned repeatedly in a process that spanned nearly five years, two lead architectural firms, myriad rounds of negotiation, and feedback with the local community, government entities, and other stakeholders.

Clearly, they spared no expense on the project. On Thursday morning, we got a reminder that Cincinnati took a comparable approach with its roster. The MLS Players Association released its semiannual salary guide, revealing that FCC carries the fifth-highest wage bill in MLS, behind Miami, Toronto FC, LA Galaxy, and Atlanta United. That doesn’t fully reflect the $20-million-plus winter shopping spree that brought Brenner, Isaac Atanga, Luciano Acosta, and Ronald Matarrita to southwestern Ohio. Thursday also brought more evidence of GM Gerard Nijkamp’s work in this department as the club announced the signing of US veteran Geoff Cameron.

All this might seem to indicate that Cincy is one of MLS’s elite teams, flush with wealth and ambition. Unfortunately for the young club’s impressively large fanbase, the standings suggest the exact opposite. The Orange and Blue claimed back-to-back wooden spoons as the league’s bottom-dweller in 2019 and 2020 and went 0-2-1 over the first month of this season.

Cincinnati has already allowed a league-worst 10 goals in 2021, good for a league-worst -8 goal differential and a resumption of usual service at the foot of the Eastern Conference standings. While it’s early in the campaign, some outlets’ data analysis suggests that the underlying numbers are just as concerning. This week MLSsoccer.com’s Matt Doyle made the sobering observation that of FCC’s 10 wins in its MLS history, eight of the opposing teams parted company with their head coach in the weeks following. That suggests an unflattering perception taking root around the league.

Cincinnati coach Jaap Stam will mark his one-year anniversary later this month and does not appear to be in imminent danger of dismissal. That would be sensible, considering all the turnover that preceded him. That said, the club’s wealthy ownership can only have so much patience stored up considering the cash they’ve splashed and the depth of the struggles up to this point.

Awarded an MLS expansion slot in May of 2018, it marked the completion of a startlingly rapid climb from birth to top-flight status in under three years. Fueling that was the enticing stadium deal that gave rise to TQL. A compelling combination of finances, political maneuvering, and fanbase mobilization appeared to provide a new kind of success story for MLS and USL, and a vindication of their partnership. It took longer to reveal that outsized egos and bullishness bordering on self-delusion were also key ingredients.

Cincinnati agreed on an abbreviated ramp-up to their MLS debut, giving themselves less than a year to prepare to compete at that level. A reliance on carryovers from their final USL Championship roster, which won that league’s regular-season title, made sense in that context. It provided an understandable explanation for a season of struggle, perhaps even two. What happened with FC Cincinnati on the field created bigger problems.

A recent blog post by MLS analyst Ben Baer titled “The Worst Offseason In MLS History” reeled off the key moves of dubious merit that produced one of the more ineffectual teams the league has ever witnessed. Cincy acquired assets of questionable value or fit and overpaid for many of them. Compared to how comparable franchises like Atlanta, LAFC, and Austin leveraged those expansion mechanisms, it was a missed opportunity.

In an interview with SportBusiness set to publish on Friday, club president Jeff Berding described FCC’s fast-tracked path to MLS as “a little too ambitious in retrospect” that “hindsight 20/20, perhaps that wasn’t the smartest thing.”

We’ll never know whether or not that path was simply too steep and narrow for any club to navigate successfully. TQL’s opening is a vital inflection point, the best possible time to begin a more positive new chapter in Cincinnati’s story.

“Maybe most teams would have waited another year before they played in MLS,” investor/operator Carl Lindner II told reporters last month. “Looking back, when you look at us in our first year, I think maybe we were number three in attendance. Our fans, clearly, were ready and I think that’s why we did that. From a business perspective or from a building, you know, building a really competitive team, that clearly wasn’t ideal… but this has been a bullet train and we did the best that we could with the MLS request to play that first year.

“I’m thankful for our supporters’ patience with us. We want to win, believe me,” Lindner added.

His ambitious but all-too-often dysfunctional organization very much needs the new house to become a good-luck charm in year three in MLS.