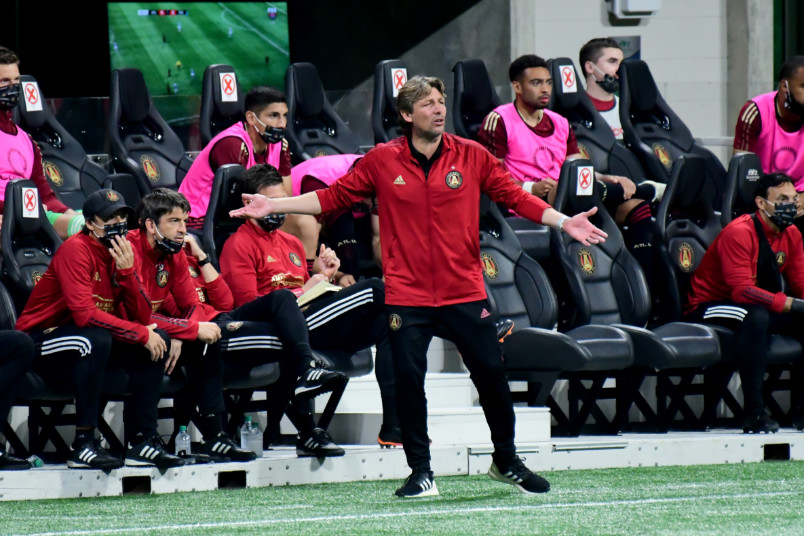 By Charles Boehm – WASHINGTON, DC (May 7, 2021) US Soccer Players – Gabriel Heinze’s team was losing, miles from home, and there was nothing more he could do about it. Atlanta United’s Concacaf Champions League dream was evaporating. The Philadelphia Union frittered away the minutes in their quarterfinal second-leg match at Subaru Park, up 3-1 on aggregate thanks to their stunning three-goal away win in the first-leg.

A famously fiery sort in his own stellar playing days, Heinze was willing to risk the wrath of the legendary Sir Alex Ferguson as he engineered his exit from Manchester United. He’s shown the same intensity as a coach. His frustration simmered as Tuesday’s game wound down, then boiled over via an animated post-game conversation, or perhaps confrontation is a better word, with Union boss Jim Curtin.

“He thought our players were diving and faking injuries,” Curtin later said. “I get that, but I don’t think that’s what we’re about. I think we’re about doing our talking on the field.”

“He’s an incredible coach. He’s an incredible player, but you can still be also a sore loser and be an ***hole at the end of the game,” he added of Heinze. “I still think there’s a right way. I think you should shake hands like men after the game. He’ll probably have something to say now that I’ve said that. But again, I’m not going to just sit here and take it anymore.”

Three days earlier, it was DC United coach Hernan Losada offering some outspoken postgame remarks. Losada had just lost his club lose its second of three games, a 4-1 setback at San Jose. He dismissed with prejudice the idea that his high-intensity training and tactical regimen might be a factor in his new team’s lengthy injured list and on-field results.

“I am not planning to change the way we are training or the way we are working,” Losada said. “All the departments need to change, need to adapt to our way of work – not the other way around. I guess DC United hired me to make a change and not to keep on doing the things we’ve been doing the last 10 years.”

Inter Miami’s Phil Neville is another one prone to making headlines. That’s partly because of his reputation as a former England international and the additional attention he draws from the media in his homeland. It’s also because of his seeming lack of a filter.

On Sunday, he surprised reporters with an endorsement of a refereeing flash point in a 0-0 draw at Nashville SC, even though it went against his side. Then he went on to implicitly blame one of his young players for aggravating a hamstring issue as part of his defense of his staff’s handling of the injury. Attendance levels for his weekly video press conferences suggest that it’s worth logging on for what Neville might say at any given moment.

For much of its history, MLS’s most prominent public personalities have often appeared uncomfortable with being, well, public personalities. Perhaps the simple existence of a league conceived and launched with the very survival of the sport in the United States in front of mind was a far bigger story than any one individual within it. Certainly, MLS executives have been fretting over the question of star power, in all its forms, from the very beginning.

Others would argue that a culture of conformity reigned. Those who deviated from the unfussy norm of careful, pragmatic worker bees were problems. The brief tenures of some prominent international names in the early years might support that idea. The data shows that head coaches from abroad with little prior experience on the domestic scene were given shorter leashes on the job.

That picture is changing rapidly. A league nearly three times its size at its founding has become far more diverse overall. That includes the backgrounds of those who roam its technical areas, even if the lack of African-American head coaches remains shamefully persistent. As teams spend more on technical staff with increasing expectations, perhaps the Mourinho-style managerial cults of personality found in the world’s biggest leagues are creeping into MLS, too.

It was a bit surreal to hear a no-holds-barred competitor like Heinze complain about the relatively common practice of Champions League clock-milking. Not even two years ago, during his stint as Vélez Sarsfield’s manager, he lamented that “as a player I would’ve not been able to play with VAR. You can’t push or grab or pull hair. You lose that picardía [gamesmanship or bite] in the game now.”

Most of us, albeit not too many Atlanta fans, can laugh off such a jarring lack of consistency. Something about it really rubbed the usually genial Curtin the wrong way, though.

Here we see a rare, if oblique, public airing of a concern that’s quietly been making the rounds among domestic coaches at multiple levels of North American soccer for some time. Could it be that a league once statistically shown to be distrustful of imports has swung around to becoming predisposed to favor their perceived style and expertise?

Talk to coaches in the collegiate or lower-division ranks about their MLS ambitions, and you are likely to hear references to how many of those jobs go to arrivals from abroad. There’s a recognition that they bring valuable new perspectives and ideas. There’s also a perception that their growing numbers make an already long and steep path to the professional level that much more daunting. Conversely, the rising profiles of exports like Jesse Marsch and Pellegrino Matarazzo offer hope of growing value abroad.

If Curtin’s words hint at a chip on the shoulder of domestic coaches, maybe that just makes MLS a more entertaining proposition. The fame of bigger and richer leagues is driven in no small part by such drama, and conflicts great and small.

The NFL manages to be highly profitable and popular despite a relatively short playing season, fueled by constant coverage of even the most arcane transactions and sound bytes in the long months between the Super Bowl and the start of summer training camps. NBC’s coverage of the Premier League takes care to also point the spotlight at what transpires along the sidelines and before and after the whistles.

Names like Mourinho and Bielsa and Cruyff and Ferguson resonate far beyond wins and trophies because they represent ideas and characters. North American soccer would surely benefit from as many of its own such stories as possible.