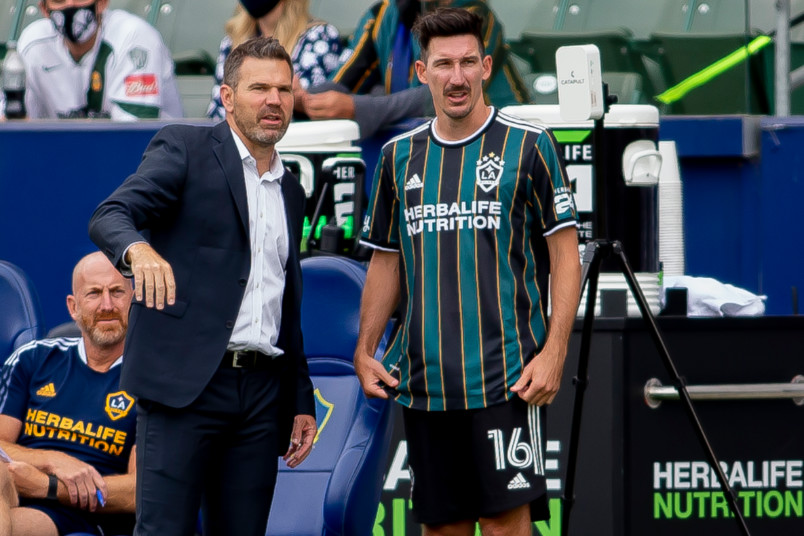 By Luis Bueno – RIVERSIDE, CA (May 5, 2021) US Soccer Players – Not too long ago, the LA Galaxy was the undisputed king of Los Angeles soccer. When Chivas USA joined MLS in 2005, the club had some competition for that abstract title. That was short-lived as the Galaxy dominated its intra-stadium rivals until Chivas USA folded after the 2014 season.

Four years later, the Galaxy had another local rival to deal with as LAFC joined MLS. Galaxy supporters did not take LAFC seriously and quickly pegged the incoming club as another version of Chivas USA. Beginning Saturday, though, those barbs and insults might lose the rest of their sting.

LAFC is already the better of the LA clubs. Three consecutive playoff appearances, one first-place Western Conference finish, and one playoff win over the Galaxy attest to that. The newer club could take this rivalry in a different direction as it looks to contend for the Western Conference title once more. LAFC could turn “El Trafico” into a backward version of “el Superclasico.”

For all of its flaws, Chivas USA did have talent not only on the field but off it. Even seven years after its demise, the club still has former members playing and coaching in the league, most notably Bob Bradley. The ex-Chivas USA boss has been the only LAFC coach in its history. He brought on several former Chivas USA members, including assistant coaches Zak Abdel and Ante Razov. Perhaps because of those initial hirings, the club was an easy target as “Chivas USA 2”

The Galaxy, of course, made life miserable for Bradley and Abdel, as well as Razov, who was on the losing side of the Superclasico as a player several times over. In 10 seasons of the Superclasico, Chivas USA won the season series just once. That was in 2007, after Bradley left and handed the reins over to now-Sounders assistant coach Preki.

If the Galaxy thought that its history of success in the league and dominance over Chivas USA predicted an easy time with LAFC, their first encounter was interesting. Zlatan Ibrahimovic helped turn a 3-0 deficit into a 4-3 win, a very Chivas USA-like, come-from-ahead loss.

The rest of 2018 played into the Galaxy’s favor in the budding rivalry. The teams tied in its two remaining meetings, although neither felt like a draw for LAFC. Particularly the lone meeting at Banc of California Stadium when the Galaxy turned a 2-0 deficit into a 2-2 draw that only did not result in a 3-2 win because time ran out on the surging Galaxy. Even though the Galaxy did not make the postseason that year, they won the season series against LAFC and maintained the bragging rights Ibrahimovic helped snag in the first match.

Since then, the series has turned in LAFC’s favor. LAFC dominated MLS in 2019 and ended the Galaxy’s brief playoff run with a thrilling 5-3 home victory, a match that was in doubt until later in the game. The teams tied the season series a year ago with two wins apiece, but LAFC scored eight total goals to the Galaxy’s seven. While the Galaxy still has more total wins (4-3) and regular-season wins (4-2) in this rivalry than LAFC, it is the Galaxy who looks like it could play the role of Chivas USA in more ways than one.

Already the Galaxy has deep ties to Chivas USA. Its general manager, Dennis te Kloese, was a key member of Chivas USA’s early days. He helped bring players over from the Mexican league as well as establish its youth program in Southern California. As GM, te Kloese has turned to ex-Chivas USA players such as Sacha Kljestan and Jorge Villafana. Back in 2007, Villafana won Chivas USA’s Sueno MLS competition that gave him his professional start.

Even the Galaxy’s new coach, Greg Vanney, has Chivas USA ties. Vanney played with the Galaxy in the Rose Bowl and Home Depot Center days. He cut his teeth in coaching with Chivas USA, serving as Robin Fraser’s assistant coach in 2011 and 2012. He parlayed that into the Toronto job. There, he became one of the top coaches in MLS and helped turn a moribund franchise into a perennial power.

This will be the first time Vanney will face LAFC as Galaxy coach. His challenge as coach will be to slow down LAFC’s attack while tightening up the Galaxy’s defense. The Galaxy has allowed seven goals in three games this season, most recently falling 3-0 at Seattle on the weekend.

Still, the Sounders showed how to slow down the Galaxy’s attack. If LAFC can turn that into a larger problem, the Chivas USA label could quickly come full circle. The Galaxy won’t have the home crowd advantage, at least not in full voice due to the 25% capacity cap. They’re already relying on one player to shift games in their favor.

LAFC has a clear opportunity here. A lopsided win would push the Galaxy even further on the back foot, compounding problems Chicharito may not be able to answer on his own. Te Kloese and Vanney watching, and Kljestan and Villafana possibly playing. Bob Bradley with clear memories of what it felt like on the wrong side of a Carson derby. All of a sudden, this could feel very much less “El Trafico” and more “el Superclasico.”