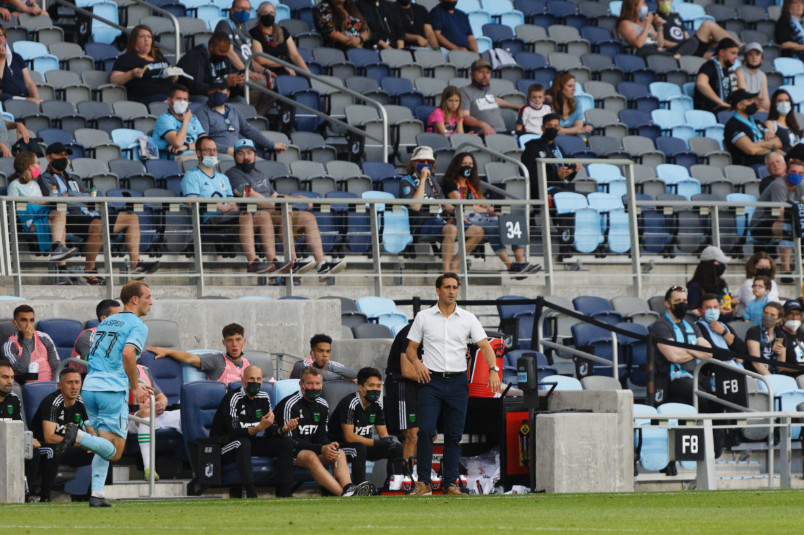 By Jason Davis – WASHINGTON, DC (May 7, 2021) US Soccer Players – Just three weeks into his first season as head coach at any level, while leading a team brand new to Major League Soccer, Josh Wolff is already ahead of the curve. Expansion teams aren’t supposed to win two of their first three matches. They certainly aren’t supposed to do that when all of the games are on the road.

Wolff is the boss at Austin FC, a club born out of conflict that has nevertheless started life with a rosy outlook. As the only major professional sports franchise in Texas’s capital, Austin FC is getting attention from quarters not normally accessible to MLS teams.

In mid-June, the club will open a brand new stadium in Austin’s northern reaches. Excitement about MLS’s arrival in town means that as soon as COVID-19 restrictions allow, the club will play in front of full houses for the foreseeable future.

That should mean a home-field advantage that the expansion team will need if it intends to reach the playoffs in its first season. It’s tough to overstate the importance of the six points, but it won’t get easier from here. The more film there is on Austin, the more opponents will be able to counter Wolff’s approach.

For a collection of players with no experience playing together in a competitive match before the start of the season, it makes sense that the philosophical and tactical approach would be simple. Outside of a few unique exceptions like Atlanta United and LAFC in recent years, the best strategy for expansion teams is organization and discipline while prioritizing keeping the opponent off the board. Wolff is trying to manage some tactical flexibility, despite the limited time his team has had together.

“There’s certainly the offensive side for us that’s evolving,” Wolff said on SiriusXMFC this week. “I think in all three of our games, we’ve had some subtle changes in there from a structure standpoint where we’re looking to progress attacks.”

After playing a tighter, more defensive game in the club’s debut against LAFC, losing 2-0 on goals in the 61st and 91st minutes), Wolff made changes for games that delivered wins against Colorado (3-1) and Minnesota United (1-0).

“Now how we advance guys,” he said. “Certainly Cecilio (Dominguez) stayed a little bit wider. Now we’re asking Cecilio to come a little bit more inside, coming down at times. And we moved Thomas (Pochettino) into different areas, pockets out wide. What I love about these guys is their desire and their willingness to run, to run off the ball, to arrive in the penalty box.

“We try to keep structures and organization within reason and things that we work on… daily. But a lot of it relates back to our game model and principles, offensive principles of how we want to function when we have the ball. We make subtle changes based on the opponent and we want to break them down just like they want to break us down.”

After two wins and six points from the club’s first three matches and with a schedule back-loaded with home games, it would be easy for Austin to get carried away about its chances in 2021. No one is talking MLS Cup yet, but early returns make the case Austin FC is a playoff contender.

“I think we’ve outwardly said the playoffs are something we want to achieve,” Wolff explained. “I think every team sets that bar of first getting in the playoffs and then and trying to make a run. We’ve put that out there and it doesn’t mean anything if you’re not willing to put in the work, suffer, grind and obviously try to have some successes as well as dealing with some of the losses. We’re not going to get carried away. It’s the third game.”

There’s no legitimate way to argue that eight away matches to start the club’s existence is a good thing. If there’s a silver lining, it’s in the bonding effect traveling so much together can have for a team. Current MLS travel protocols dictating day-of-game flights make the situation unique, but Wolff sees some good in the difficulties.

“Even good moments and bad moments there’s nothing like a road trip to bring a group together. But this group has been together now for four, three and a half months,” he said. “They’ve had their own little adversity of coming into the market, dealing with some situations. It’s a pretty well-connected group to begin with, whether it’s domestic or international. But the road trips are different these days. So flying out day-of and getting the game on quickly and coming back that night is definitely different than anything I recall. It’s the first time I’ve done it, having not been in the league last year. So it is challenging in its own way.”

Wolff is just beginning his coaching journey and isn’t focused on his career’s next steps. When asked about the news that American Jesse Marsch will take over a Champions League-caliber Bundesliga club next season in RB Leipzig, he passed on what it might mean for him to acknowledge the move as a milestone for American coaches. Wolff also referenced the comments made by Philadelphia Union head coach Jim Curtin after Curtin felt disrespected by Atlanta manager Gabriel Heinze.

“It’s well earned. It helps the respect of [American coaches] around the world,” Wolff opined. “[Jim] Curtin [Tuesday night] said it plain and simple. I think that was fantastic. We are a learning and developing country from a soccer standpoint, but we got good players and we got good coaches. It’s there’s a level of respect that we operate within and we deserve that. You deserve that as a competitor when you play games, whether you win or lost the win or lose them. I thought [Curtin] said it as eloquently as he could.”

Wolff hopes to be among the list of good American coaches in short order. It’s much too early to judge his talents as a coach, though Austin’s record is a reason to believe he’s on the right path. Building Austin FC has taken up the better part of the last two years for the former US international and the wait, to hear Wolff tell it, was worth it.

“It’s been good. I mean, it’s a lot of work,” Wolff said about finally coaching matches. “I didn’t sleep much before. Now I sleep less. Your mind is always thinking about the game. You’re constantly having dialogue with players. Even before we had our first [training sessions]I would text players quite often. I would be watching games that they were, you know, Rodney [Redes] and Cecilio [Dominguez] were down in Paraguay—having relationships, forming bonds with these guys, really trying to strike a chord with them, because what we do is stressful.”

Modern coaching is a difficult-to-manage mix of philosophy, tactics, and man-management. Those who can properly manage all three win trophies. Wolff believes he’s ready for the challenge.

“It was a long time coming, but I wasn’t ready for a long time,” he admitted. “And it takes time to understand what it is you want to be about, how you want to teach the details of everything that we want to do.”