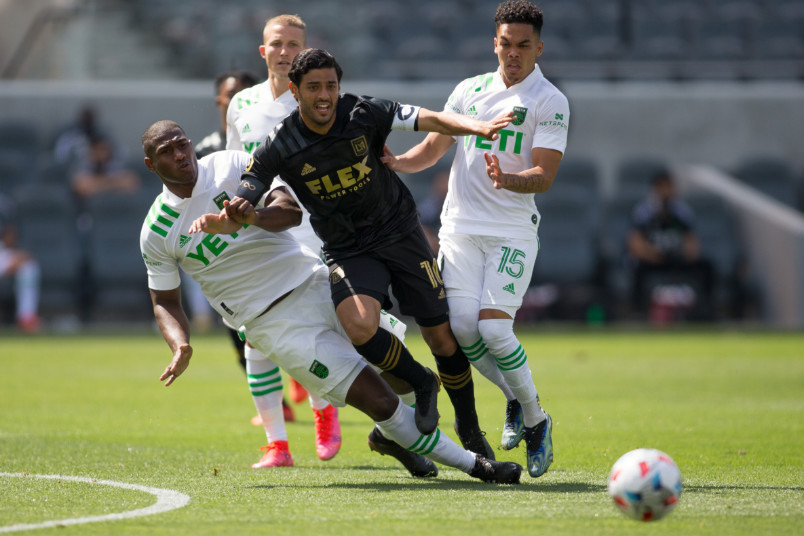 By Luis Bueno – RIVERSIDE, CA (May 26, 2021) US Soccer Players – The last time Major League Soccer played a normal season, it ended with Carlos Vela winning the Most Valuable Player award. And with good reason. Vela had a record-breaking year in 2019 as part of one of the best regular seasons in MLS history. This year, LAFC needs another standout performance from Vela, and the sooner, the better.

Through six weeks of the 2021 season, LAFC has been rather pedestrian. The club is stuck somewhere between contender and bottom feeder. The roster lacks star power, and the results are middling. Vela can change that. That much looked evident for LAFC last time out. Vela started just his second game of the season. The club responded with a 2-1 win, their first win since the season opener on April 17. That improved their record to 2-2-2.

Vela’s role is clear. Inject the old magic into a squad that is more dependent on one player than they’d like. Fortunately, that player is an outstanding talent, but this isn’t 2019. Without the same level of support, it’s up to Vela to push his club every time they take the field. Without him, we already know that they’re a very different team.

In some ways, though, there are no excuses for Vela not to do just that. He is the league’s highest-paid player and will not have Mexican national team duties to distract him. Additionally, missing the restart and then limited due to injury made him less of a factor in 2020. He finished with four goals and one assist over seven games. This is an opportunity for a reminder of what Vela means in LAFC’s lineup.

Vela has the stats to back that up. In 2019, he scored a league-record 34 goals and added 15 assists while leading LAFC to a 21-4-9 record. LAFC set the record for most points in a season (72) and tied the record for most goals in a season (85). Having players like Adame Diomande, Brian Rodriguez, and Christian Ramirez around to feed off of helped and made it easier to collect assists. Last season, we saw enough of Vela to spot the difference in those squads.

Right now, the first step is returning to full fitness. A quadricep injury has limited his playing time, appearing in three of the club’s six games and never for over an hour. That made his showing on Saturday promising. Vela had one assist, a nifty through ball he placed in Diego Rossi’s way to give LAFC a 2-0 lead. It was Vela’s first assist of the season.

One of the problems with being the highest paid player in the league is the burden of expectation. For Vela, that’s compounded by his injury issues. Few doubt that a fit Vela playing regular minutes not only will change LAFC’s fortunes, he’ll once again show he’s a bargain at $6.3m a season.

Even without an MLS Cup appearance, Vela has been a revelation since joining the league. His talent is superb and he has shown his quality time and again. He’s the kind of talisman player that has opposing coaches altering their plans to account for him. Play Vela straight up, and he can and will punish most of the clubs in this league. The assist total from 2019 is evidence of that, a goal scorer more than willing to create for his teammates.

Barring injury, Vela in the lineup reasserts LAFC’s place in the Western Conference regardless of their sluggish start. He won’t miss time for the Nations League, giving them an advantage in June. That may show us what kind of club LAFC is this season, something that only becomes clear with Vela in the lineup.

What that means in the table is the question. LAFC is always going to set the bar at the highest level. The 2020 season was all kinds of crazy. That makes it easier to dismiss their 7th-place finish. Still, not every team had that level of falloff, and it remains a concern.

Their city rivals shook of what many expected to be early issues. At 4-2-0 and with Chicarito Hernandez changing games, the Galaxy reset expectations. That run of form includes beating LAFC 2-1 at home on May 16. Being the best team in LA already carries real meaning, especially since the remainder of that season series waits for late August and early October.

LAFC playing its way back into a contender seems a stretch right now. They need to show that they can string together wins before deciding that they can chase the Sounders. The two meet in the first game back after the Nations League break. LAFC hosts on June 19, but this is more about making up for the 2-0 loss at Seattle on May 16 rather than a statement of intent towards the future. That’s the situation LAFC played itself into over the opening weeks of the season with limited use of Vela. With him available, things have to change for Los Angeles Football Club.