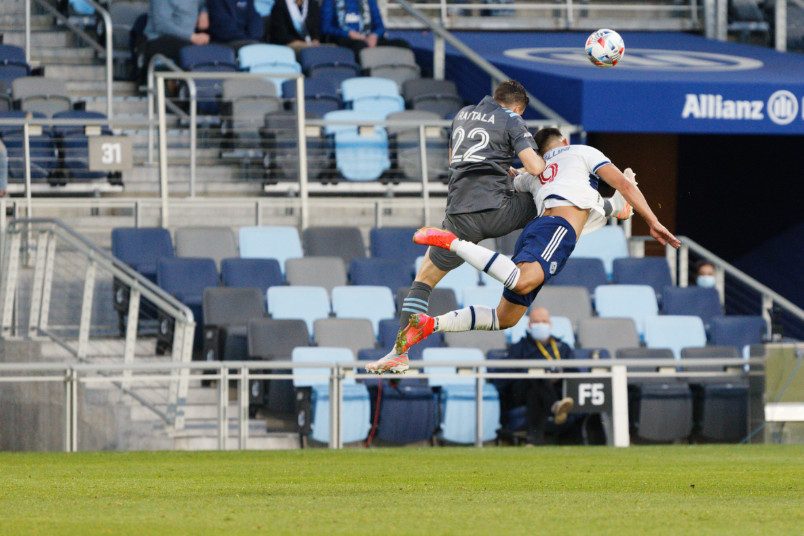 By Jason Davis – WASHINGTON, DC (May 14, 2021) US Soccer Players – The great soccer minds of history never quite answered just how long a coach should get before it’s fair to judge them on their record. Almost everyone agrees that coaches need a season. No one is quite sure how quickly a club should jettison its field boss if things go bad in the beginning or middle of a campaign.

Barely five rounds into the MLS season, it’s probably too soon to talk about coaches sitting on the proverbial hot seat. Especially in this league, coaches get the benefit of the doubt before the season hits the one-month mark. That doesn’t mean it’s too early to talk about which coaches are feeling some early pressure. We can’t expect any teams to make changes quite yet, but what happens in May will set the stage for decisions made down the line.

Earlier this week, it was Minnesota coach Adrian Heath under pressure. Though Heath is the lone coach in the club’s MLS history and built the Loons into a contender in the Western Conference in 2020, an exceedingly poor start to 2021 raised questions. Even good coaches sometimes find their messaging falls on deaf ears after a few seasons on the job. Every coach has an expiration date.

After four matches, Minnesota United sat at the bottom of the Western Conference standings with zero points. Giving up a two-goal lead in a 3-2 loss in Colorado on Saturday underlined the problems. This was a club at its lowest point since its early years in the league. Back then, the club was selling its fans on a slow build ahead of the opening of a new stadium in St. Paul.

Allianz Field is now in its third year. The expectations for Minnesota United have never been higher. Entering a Wednesday night home match (with a limited crowd on hand) against Vancouver, Heath himself acknowledged the bad energy running through the team after the disastrous start.

“The longer this goes, the more it builds,” Heath said ahead of the game. “We know sooner or later the pressure will start to keep building. To get rid of that, we need to win a game. We have a chance Wednesday night. That’s been our focus. Let’s forget about what’s around the corner, let’s put everything focused on Wednesday to try and get the season up and running.”

Minnesota won against the Whitecaps thanks to Ramon Abila’s first goal for the club following his loan from Boca Juniors. Abila is just one of several potential solutions to Minnesota’s issues at center forward. The Loons famously made their run to the Western Conference final in 2019 despite playing winger Robin Lod out of position as a false nine. While the win doesn’t fix the Loons or guarantee a successful season, it does give Heath a chance to build on the energy a victory always provides. He can point to the work-in-progress nature of the roster while professing confidence in the direction of the club more legitimately.

“We know we haven’t started the way we want, there’s no point in denying that,” Heath said. “But there’s been an awful lot of positives. … We’ve tried to express to the players that there have been good moments, we just need to cut out the errors. I think we’re going to be fine.”

“Fine” begins with three points on Wednesday, but history is still working against them. It typically takes 50 points to make the MLS playoff field in a given year, regardless of the number of teams in the conference. Minnesota’s failure to get any points out of its first four games meant it would need to average 1.66 points per game the rest of the season to reach the postseason. For context, Minnesota finished with a 1.62 points-per-game number over last season’s truncated schedule, good enough for 4th-place.

If the expectation is starting the playoffs at Allianz Field, there’s a lot of work to do. Next up for Minnesota on the march to 50 is a home date against FC Dallas on Sunday. A win would do two things: bring the number of points left to be collected down by a further three and increase belief that Heath is still the right man for the job in the Twin Cities.

Coaching job security is a function of current results, previous success, expectations, and club ambition. For a coach to feel real pressure, especially this early in the season, he must be coming up well short of the bar set before the campaign at a club with a proven willingness to make a mid-season change.

The other clubs in MLS who started the 2021 season poorly aren’t too happy about the lack of points, but that doesn’t mean they will seriously consider changing head coaches any time soon.

With Minnesota off the foot of the combined standings, FC Cincinnati and the Chicago Fire now share last place with a single point. Cincinnati boss Jaap Stam is still in the honeymoon phase of his tenure, joining the team midway through last season. The club spent significant money in the offseason to improve its roster. Though results are wanting at the moment, there’s no reason to think that Stam won’t get ample opportunity to make it work. It helps Stam that FCC might not have an appetite to pay another coach to leave after turning over the position twice in its first three MLS campaigns.

In Chicago, head coach Raphael Wicky is now in his second year with the Fire. After the pandemic scuttled the club’s plans for a high-profile return to Soldier Field, he’s getting something of a do-over. Wicky’s seat can’t be comfortable, exactly. His win percentage is a paltry 18 percent. With the team in a state of transition with a full return to in-market games and fans slowly making their way back to stadiums, he should get a reasonable chance to show improvement.

The Fire will again revamp its branding for the 2022 season after the disastrous effort announced in late 2019 and might wait until that event before making any major changes to the on-field product. The club’s winter was a quiet one. The Fire signed just three players for the new year, none of whom will make more than the non-DP maximum. That’s either a sign of future aggressive spending to come or a sign of limited ambition. Either way, Wicky seems safe.

The season is new, and MLS coaches are still getting the benefit of the doubt. At some point, that will no longer be the case.