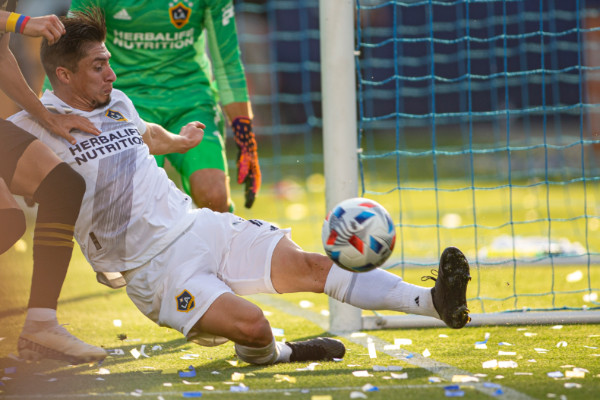 By Luis Bueno – RIVERSIDE, CA (May 12, 2021) US Soccer Players – Eastern Conference teams are dominating the Power Rankings in May. Even though a Western team occupies the top spot this month, five Eastern teams follow. The quality is there from the start in the East. Out West, the situation is a bit different. Teams like LAFC, Minnesota, and Portland have all taken nosedives straight out of the Top 10.

Seattle moved up one spot to take its rightful place atop these rankings. They’ve been the class of the league so far with a 3-0-1 record, 10 goals scored, and two goals allowed. No team has scored more. Raul Ruidiaz accounts for half of that. Seattle’s lone dropped point came in a gritty 1-1 draw at LAFC, who may have already passed the torch for regular-season Western Conference dominance over to the Sounders in that match.

Why would anybody keep a struggling club near the top of the rankings? Better yet, why would anybody argue that if it weren’t for Seattle’s stellar play, they’d still hold the top spot? Well, the club no longer stressing the word Crew is playing like one. The difficult and emotional matches against Monterrey in a tough quarterfinal loss against the Liga MX giants say more about this team than their one win and two draws in MLS.

Turns out NYCFC can play. Even with some key roster losses from last season, NYCFC is still as tough as it has been over several seasons. Taty Castellanos has taken on the scoring mantle with four goals already. Midfielder Jesus Medina has scored three goals in four games and is on pace to shatter his previous season-high total of six, set back in 2018. NYCFC has earned its last four points, beating the Union 2-0 and pulling out a tough 1-1 draw at Orlando last time out.

Orlando is perhaps the toughest draw for any club this season. They’ve got just one win in four games, but the team has yet to lose a game. Orlando fights in every contest. This team developed a tough mentality a year ago, and that has carried over this season. Securing a result is something this team seemingly has down. When they turn a few of those into wins, we’ll see in the table what other clubs already know.

New England climbed a few spots despite a difficult loss to Nashville. Wins over DC United and Atlanta stress the positives about this club. The defense needs some tightening. Five goals allowed in four games is not good enough. The Revs play Philadelphia, Columbus, and the Red Bulls in its next three matches, a test for what coach Bruce Arena has in mind for his group.

The Union has had tremendous success this year, but only some of that has been in league play. The team slides a couple of spots down after losses to Inter Miami and NYCFC. They looked strong against Chicago last time out, but that depends on how highly to rate the Fire. Then there’s the Champions League, where Philadelphia is the last MLS club standing. The semifinal round waits for later in the summer, but Kacper Przybylko has been stellar in Champions League play with five goals. Right now, he needs that kind of output in MLS where he’s scored none.

The 3-1 loss to Real Salt Lake was not pretty, but Sporting KC’s comeback win over Austin was impressive. Sure, it came against an expansion side looking to find its way in the league, but Sporting KC showed the grit and determination that are its hallmarks. The defense seems like a bit of a mess, and straightening that out now is the challenge.

Chris Wondolowski gets an apology from us for questioning why the Earthquakes were going to rely on a 38-year-old striker. It turns out that they knew better. Just ask Real Salt Lake. Wondolowski scored a late brace in San Jose’s 2-1 win at Rio Tinto. He looked like vintage Wondo in knocking in a rebound and burying a header to turn the game around. Wondolowski can play as long as he wants.

The Galaxy has done well overall, but the team still has issues. The win over LAFC was impressive, but the 3-0 loss at Seattle was as meaningful for the wrong reasons. The defense is a work-in-progress and a requirement to make Chicharito’s goals count.

Josef Martínez is back, and that alone should be enough for Atlanta to rejoice. Atlanta’s star striker missed nearly all of 2020 with a knee injury and scored his first goal since 2019 in a 1-1 draw with Inter Miami. Like a few other MLS clubs, Atlanta has had to deal with the Concacaf Champions League, but they were the only ones exiting to a fellow MLS club. The next stretch of games, including a May 23 fixture against Seattle, will help determine if Atlanta can stabilize its play or take a step back.

The loss to Austin wasn’t great, but the Rapids recovered nicely from that. The club’s come-from-behind 3-2 win over Minnesota showed that this team can play tough. Five different players have scored a goal each for the Rapids this season. Kellyn Acosta’s effort against the Rapids was a splendid volley from distance that helped spark the comeback against Minnesota. The team hasn’t yet found a reliable goalscorer to lead the way, and it needs someone to emerge.

Carlos Vela has been a non-factor this season, having played just a handful of minutes due to various injuries. Diego Rossi made his season debut in the 2-1 loss to the Galaxy, but this team is not the high-octane team that has been the league’s best attack for the last three seasons. LAFC has worked hard for its five goals this season. That work will only increase with LAFC mired in the middle of the table on 10 points.

Nashville’s biggest problem in 2020 may not resurface this season. As an expansion team a year ago, Nashville scored just 24 goals in 23 games. They’ve already scored a quarter of that figure through four games this season. Nashville’s defense was vulnerable early, but two consecutive clean sheets suggest that they’re making the right adjustments. Jhonder Cadiz’s two goals have each sparked comebacks as each came with Nashville down 2-0.

FC Dallas has flexed its muscle just once this season, in a 4-1 win over Portland, but the team looks capable of scoring goals. Offseason acquisition Jader Obrian has scored in his last two games, paying off the club’s investment in him. Franco Jara has yet to score but shows promise. Perhaps the biggest downside is following up that win over Portland with a 1-1 draw against Houston.

Is New York really making progress, or is it smoke-and-mirrors? The Red Bulls posted 2-0 wins over Chicago and Toronto FC, but that only tells us so much. How they do moving forward against better Eastern Conference clubs will give us more of an idea. Considering their roster, it’s doubtful the Red Bulls will be near the top of the conference this time next month.

This is a club already stepping up to challenges, starting with playing home games in Utah. The club controlled fellow wayward Canadian club CF Montreal at Rio Tinto Stadium, winning comfortably by 2-0. Canadian sniper Lucas Cavallini has scored just one goal. If he gets going, so do the Whitecaps.

RSL might have climbed higher in these rankings had it not let San Jose score twice in a tough loss. Still, RSL’s wins against Minnesota and Sporting KC were perhaps a bit surprising. RSL was impressive against Sporting KC as the club fell behind early and roared back to victory. Rubio Rubín has delivered three goals and looks poised to handle the pressure of being the focus for opposition defenses.

The Higuain brothers have been solid for Inter Miami. The team needs a bit more cohesion on both sides of the field to impose their game. Two draws and a win over Philadelphia show that they’ll compete, but this could be a tough season in the Eastern Conference. Inter Miami can score goals, unlike early last season when the offense looked lost.

Houston hasn’t been terrible, especially from a team that failed to reach the playoffs in six of the last seven seasons. Two consecutive 1-1 draws to start the month may not bode well for results against Colorado, Vancouver, and Sporting KC twice.

Once again, it’s the Champions League causing problems. The Timbers played well against Club America only to end up 1-3-0 in MLS. Why are we lenient with Columbus and not Portland? Their 2-1 loss to Seattle led to facepalm after facepalm, with botched penalty kicks and poor defending highlighting a tough loss to its bitter rivals.

A solid start gave way to a scoreless May. CF Montreal has four points from four games, not a bad total given the team’s outlook ahead of the season. That included a scoreless draw against Columbus. CF Montreal faces a tough road playing home games in Florida. Any positives the club takes away almost seems like a bonus given the circumstances.

It looked like an interesting expansion season after two wins. Then the club ran into Sporting Kansas City. That showed just how much room there is to grow. Leading 1-0, Austin went down to 10 men and eventually allowed the equalizer and the match-winner. They looked powerless to stop the bleeding.

It took a lopsided opening day loss to Seattle to reset expectations for Minnesota. They’ve looked shellshocked in its games and far from the same team that was 90 minutes away from playing in MLS Cup 2020. Getting over that means shaking off those early disappointments.

Playing in Orlando and Tampa, it’s not easy being Toronto right now. Simply put, the play on the field has not nearly been strong enough to compete. Only four teams have allowed more than Toronto FC’s eight goals, and the Reds have yielded that much in just three games.

Give DC credit for stepping up in the season opener. Following that 2-1 win over NYCFC, DC looked like something else. Over the next three games, they’ve scored two goals and allowed eight Worse, DC has been hopelessly out of games. Tighten the defense and find a goalscorer, shorthand for struggling club in any league.

The Fire’s return to Soldier Field amped up the club for all of 11 minutes. Chicago scored two goals in the first 11 minutes in its season opener against New England. They managed just a 2-2 draw and then lost three in a row. Philadelphia exposed Chicago’s defense several times at Soldier Field. Getting it together at home is now step one.

The first 12 minutes of the season were fun for FC Cincinnati. After that, it’s been a defense leaking goals while making unflattering comparisons to last season. All the work and money invested, and Cincinnati already needs to prove that it was well spent. FC Cincinnati has been outscored by 10-0 after those magical dozen minutes, and the team is already in a tailspin.