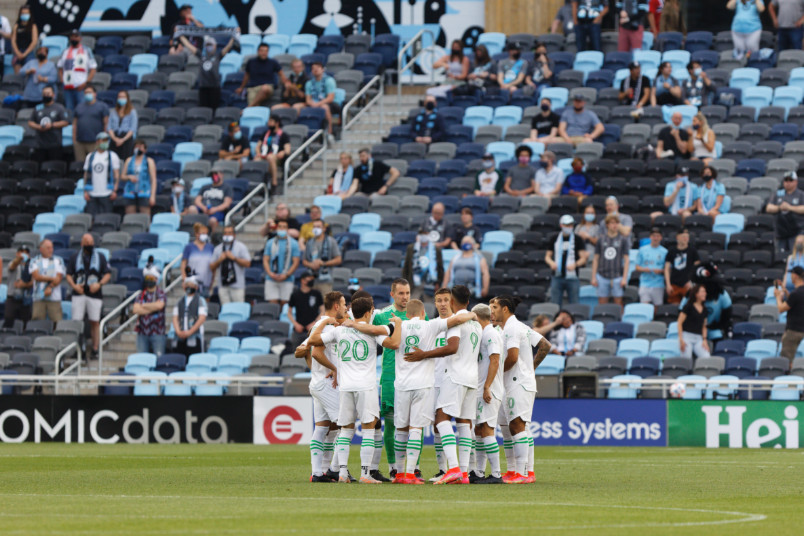 The roundup of week 3 in Major League Soccer starts in Harrison with Red Bull New York shutting out Chicago 2-0. Cristian Casseres Jr scored in the 47th with Caden Clark doubling the lead in the 64th. Red Bulls goalkeeper Carlos made four saves to keep the clean sheet.

“It’s always the same,” Chicago coach Raphael Wicky said. “That the team is there, the team is in the game, they stood up today, they followed the second balls and all the fighting, and then again out of nothing, you make a big mistake and it costs us the game. That’s the frustrating thing, and we’ve got to change that as quick as possible. Otherwise we’re going to talk about that the whole year.”

Real Salt Lake came back to beat Sporting Kansas City 3-1 at home. Alan Pulido put Sporting up in the 17th with Damir Kreilach equalizing in the 35th. Rubio Rubin did the rest of the work, scoring in the 52nd and 77th minutes.

Montreal and Columbus drew 1-1 at Club de Foot’s temporary home in Fort Lauderdale. Montreal finished with three shots on goal to none for Columbus.

Houston and LAFC finished 1-1 at BBVA Stadium. Corey Baird put LAFC up in the 55th with the lead lasting all of two minutes. Tyler Pasher equalized for the Dynamo in the 57th.

“You know, when you look at, LAFC’s chances, they created a couple chances through passes in the middle,” Houston coach Tab Ramos said. “I thought that we, the team in general, did a great job of finding our wingers in 1v1 situations where they could have made a big difference and we weren’t able to cash in. It’s early in the season. We’ll keep working on that.”

New England beat Atlanta 2-1 at home. Brandon Bye scored in the 19th for the Revs with Atlanta’s Marcelino Moreno equalizing from the penalty spot in the 43rd. Carles Gil converted a New England penalty in the 53rd minute.

“It was a real good performance,” New England coach Bruce Arena said. “I think for 90 minutes we played well against a very good team. They’re going to be a team that’s going to contend for the MLS Cup this year. And they demanded that we play with quality tonight and you see the difference with this opponent this week, as compared to last weekend. A different kind of challenge. Atlanta is a very good team and it required that we raise our level of play, and I think our guys responded very well.”

Orlando City shutout FC Cincinnati 3-0 at home. Teko Akindele had City up in the opening minute with Nani doubling the lead in the 19th. Junior Urso finished off the goals in the 80th minute. Orlando goalkeeper Pedro Gallese didn’t need to make a save to keep the clean sheet.

NYCFC won 2-0 at Philadelphia. Jesus Medina had NYCFC up a goal in the 5th minute when the Union’s Jose Martinez saw red in the 16th. Valentin Castellanos scored for New York in the 65th. NYCFC goalkeeper Sean Johnson also didn’t have to make a save to keep the clean sheet.

FC Dallas beat Portland 4-1 at Toyota Stadium. Andres Ricaurte put Dallas up in the 2nd minute with Jadar Obrian doubling the lead in the 13th. Bressan made it 3-0 Dallas three minutes into stoppage time. Portland’s Eryk Williamson pulled a goal back in the 62nd with Dante Sealy scoring for Dallas in the 85th minute.

Austin FC won again with a 1-0 shutout of Minnesota as their road swing continues. Diego Fagundez scored in the 17th with Brad Stuver making two saves to keep the clean sheet.

“What I’m most proud of is the ability to grind,” Austin coach Josh Wolff said. “It’s always tough, we know we got [seven-straight road] games but I don’t really spend a ton of time talking about being on the road. These are games we have to play and they happen to be on the road and we’re learning more and more about each other every day but we still want to go play the way we play.”

San Jose picked up three points at home with a 4-1 win over DC United. The Quakes scored through Javier Lopez in the opening minute with Cade Cowell making it 2-0 in the 26th. DC United’s Tony Alfaro pulled a goal back in the 31st. Jackson Yueill put the game away for San Jose, scoring in the 43rd and 85th minutes.

Week 3 ended at BC Place with Colorado shutting out the Whitecaps 1-0 on the road. Diego Rubio scored in the 26th minute with William Yarbrough keeping the clean sheet.