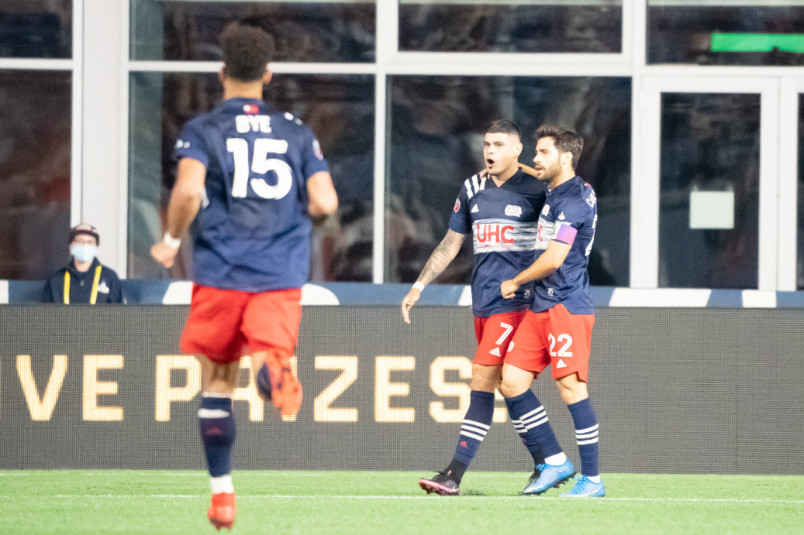 The week 6 MLS roundup starts in Fort Lauderdale with CF Montreal losing 2-1 to FC Cincinnati at their temporary home. Djordje Mihailovic scored for Club de Foot in the 56th. FC Cincinnati’s Jurgen Locadia equalized in the 70th with Gustavo Vallecilla scoring in the 86th minute.

Portland shutout the LA Galaxy 3-0 at home, taking full advantage of a 44th minute red card to LA’s Derrick Williams. Felipe Mora scored for the Timbers in the 47th and 60th minutes with Diego Valeri adding a penalty in the 69th. Portland goalkeeper Logan Ketterer made three saves.

Chicago shutout Inter Miami 1-0 at Soldier Field. Liga Stojanovic scored in the 69th minute. Bobby Shuttleworth made one save to keep the clean sheet.

“The way they entered the game, they came out with energy, came out with confidence, immediately tried to be active and take this game in our hands and create, with the ball and without the ball being very active, that was just very, very positive,” Chicago coach Raphael Wicky said. “Because, the ones of you who are athletes, who do sports, who have played on a certain level, when you do lose your confidence, yeah, your confidence goes down very quickly. And then, sometimes you come out and things don’t go smoothly. Today, I’m really happy with the way the guys responded and I’m really happy that they actually got rewarded for a very good game.”

FC Dallas and Real Salt Lake finished 2-2 at Toyota Stadium. Rubio Rubin opened the scoring for RSL in the 20th minute. FC Dallas’s Franco Jara equalized from the penalty spot in the 43rd with Ryan Hollingshead scoring in the 83rd. Damir Kreilach equalized for Salt Lake in the 86th minute.

New England beat the Red Bulls 3-1 at home. Andres Reyes scored for New York in the 7th minute with Gustavo Bou equalizing in the 36th. Reyes saw red in the 38th. Tajon Buchanan put New England up for good in first-half stoppage time with Adam Buksa scoring in the 82nd.

“Honestly, we knew that New York always plays the same way, both at home and on the road,” Bou said. “They are physical, they have a lot of midfielders. We had to play fast in that zone, and we had chances to find players on the outside for one-on-one opportunities, and the changes worked. They were active on top and we needed that, and we were able to come away with three points at home tonight.”

Houston beat Vancouver 2-1 at BBVA Stadium. Memo Rodriguez scored for the Dynamo in the 8th with Maxi Urruti scoring in the 42nd. Vancouver’s Deiber Caicedo pulled a goal back in the 80th minute.

Sporting Kansas City beat San Jose 3-1 at Avaya Stadium. San Jose’s Javier Lopez opened the scoring in the 4th with Jaylin Lindsey equalizing in the 15th. Alan Pulido scored for Sporting in the 60th with Daniel Salloi finishing off the goals in the 75th minute.

LAFC won 2-1 at home over Colorado. Diego Rossi scored in the 14th and 33rd minutes for LAFC. Michael Barrios pulled a goal back in the 50th minute.

“I think when you watch us play, our ability to play from inside to outside and then outside to inside, whether it’s with passes or dribbling from outside to inside, is a big way that we find spaces and openings,” LAFC coach Bob Bradley said. “And Carlos’s ability to do that from the right is so important in the way we attack. Definitely that started the goals in the way that we were able to get into the middle-third and then spread them out and then come from the outside-in and find some of the right passes.”

On Sunday, Seattle drew 1-1 with Atlanta at home. Raul Ruidiaz scored for the Sounders in the 6th minute with United’s Josef Martinez equalizing from the penalty spot in the 86th.

“What I’m trying to do with my players is to try and teach them a certain way,” Atlanta coach Gabriel Heinze said. “There will be some games where we have more chances. There will be games when we don’t have as many chances. And the day that I don’t have the trust in the players I’m coaching, I will move away.”

Week 6 ended at Nissan Stadium with Nashville shutting out Austin 1-0. Randall Leal scored for Nashville in the 35th with Austin’s equalizer ruled out by instant replay in the 73rd minute.