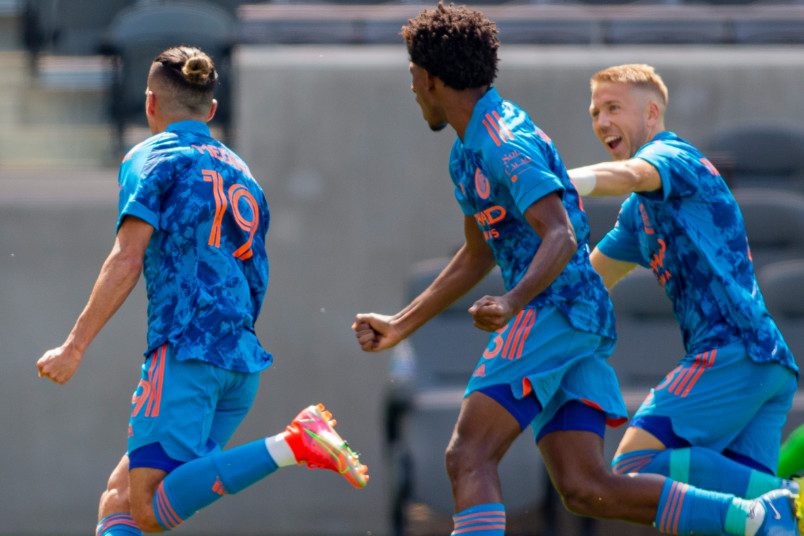 Week 7 of the MLS season started at Soldier Field with Montreal shutting out Chicago 1-0 on the road. Mason Toye scored the only goal in the 87th minute with Clement Diop making six saves to keep the clean sheet.

“I think overall we controlled the game well,” Chicago coach Raphael Wicky said. “We were, in my opinion, clearly the better team. In the beginning, we gave up two easy balls where Montreal had two chances. But, after that, I think we controlled it very well and created lots of moments…. At the end of the day, we have to defend that cross better. It’s frustrating. It’s disappointing going into a three week break with this result, especially when you see that this is a game where we were the better team.”

The New York Red Bulls beat Orlando City 2-1 at home. Caden Clark opened the scoring for the Red Bulls in the 35th with Cristian Casseres Jr doubling the lead in the 60th. Silvester van der Water pulled a goal back for City in the 84th minute.

Columbus beat Toronto 2-1 at Crew Stadium. Luis Diaz put the Crew up in the 12th with Gyasi Zardes making it 2-0 in the 21st. Ayo Akinola scored for Toronto in the 52nd minute.

New England won 1-0 on the road in Cincinnati. Adam Buksa scored in the 70th with Matt Turner making four saves to keep the clean sheet.

Atlanta and Nashville finished 2-2 at Mercedes-Benz Stadium. Marcelino Moreno scored for United in the 6th minute with Erik Lopez scoring in the 51st. Nashville’s Hany Mukhtar scored in the 80th and 83rd minutes to split the points.

“A football game can’t be analyzed by individual parts. You have to analyze the whole context,” Atlanta coach Gabriel Heinze said. “The way I feel is to analyze the whole game. You can play in different ways. You can be attacking well and defending bad. But the results are not going to appear often. I think you need to work in both parts in order to win a game.”

NYCFC came back to beat LAFC 2-1 on the road. Corey Baird scored for LAFC in the 56th. New York’s Jesus Medina equalized in the 70th. NYCFC went a man down with Nicolas Acevedo seeing red in the 86th. Ismael Tajouri-Shradi scored NYCFC’s winner in the 90th minute.

The LA Galaxy shutout San Jose 1-0 at home on a 70th minute own-goal. Jonathan Bond kept the clean sheet with 12 saves. The Galaxy put eight shots on goal in a game where the clubs split possession 50/50.

Sporting KC came back to beat Houston 3-2 at home. Falling behind to a 13th minute Matias Vera goal, Gianluca Busio equalized for Sporting in the 51st minute. Alan Pulido gave them the lead from the penalty spot in the 61st with Gadi Kinda scoring in the 65th minute. Maxi Urruti scored for the Dynamo four minutes into stoppage time.

“I really didn’t think that today we had one of our better days,” Dynamo coach Tab Ramos said. “We didn’t do a good job of possession of the ball, I think. Obviously this is a very difficult place to play. They came in, high pressed the whole time and it was difficult to get out, but at the same time you have to be able to complete a couple passes to be able to get them on their heels and I felt like today we weren’t able to do that.”

Colorado held up at home with a 3-0 shutout of FC Dallas. Keegan Rosenberry opened the scoring in the 13th with an own-goal doubling the lead in the 41st after a saved penalty. Michael Barrios finished off the scoring in the 71st minute. William Yarbrough kept the clean sheet with six saves.

Real Salt Lake drew 1-1 at home with Minnesota. Damir Kreilach put RSL up in the 13th with Kino Hansen equalizing for United in the 78th.

On Sunday, Philadelphia shutout Portland 3-0 at home. Kacper Przybylko started the scoring in the 26th with Sergio Santos making it 2-0 in the 31st. Jack Elliott finished off the goals in the 63rd minute. Union goalkeeper Andre Blake made four saves to keep the clean sheet.

Week 7 finished in Seattle with the Sounders and Austin FC playing out a 0-0 draw. Austin put three shots on goal to Seattle’s two.