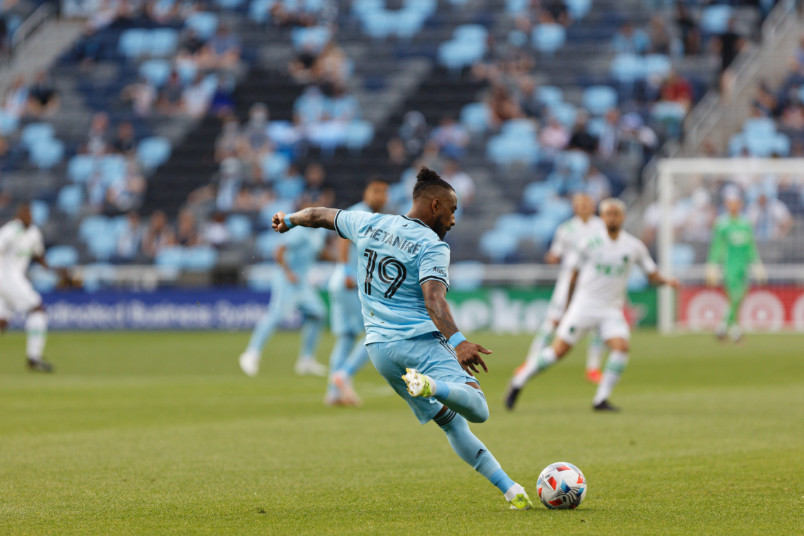 By Jason Davis – WASHINGTON, DC (May 5, 2021) US Soccer Players – Panic rarely makes things better. By its very nature, the word conveys an emotional response to a problem. Letting emotions loose without hanging onto some modicum of logic tends to lead to rash decisions. Rash decisions upend plans, restart processes, and end progress before it has a chance to begin. It’s usually best to avoid panic whenever possible. That’s a message that clubs across Major League Soccer would be smart to internalize in the early days of the 2021 season.

Three weeks into the schedule, and there are already a few teams that might be in danger of panicking.

It makes sense to start with the defending league champion, a club that naturally entered the new season with big expectations. The Columbus Crew navigated the choppy waters of 2020 to an MLS Cup title last December. With a new stadium opening in downtown Columbus this May and new ownership hoping to build on the success of last year, the Crew went out and strengthened an already excellent roster.

So far, neither the new talent nor the established group has impressed in League play. Through three games, the Crew is the only team in Major League Soccer without a goal. Saturday’s 0-0 draw with CF Montreal in Fort Lauderdale leaves Columbus in 10th place in the Eastern Conference. Worse than the lack of goals is the lack of shots. Against Montreal, the Crew managed just three attempts while Club de Foot registered 20.

There’s no need for the champs to panic quite yet. All of the offseason signings haven’t yet come to bear on the 2021 season, with Kevin Molino working back from a hamstring issue. The Crew’s MLS Cup also gained them entry into the Concacaf Champions League, an effort that played a major role in the start of the campaign in MLS. After the draw against CF Montreal, Crew head coach Caleb Porter spoke about the psychology of fighting on two fronts for a team that holds itself to a high standard.

“It’s going to be some games in these windows that they’re head-scratchers because guys are tired,” Porter said. “My message wasn’t, ‘Oh it’s OK.’ It was, ‘You’ve got to be stronger mentally,’ and you got to be able to fight through it and snap out of it and be a little bit more alert. It was just a little bit slow and tired looking.”

At the same time, Porter wasn’t unreasonable in his assessment of his team following Wednesday night’s knock-down, drag-out affair against Monterrey in the Champions League.

“The cohesiveness, certainly with five rotations, you can expect that it’s not going to be quite as clean and fluid,” Porter said. “It’s a game where it’s extremely hot. We played an emotional, high-intensity game two days ago where we gave a lot, and today we looked tired. We looked like it was hot. We looked like we were trying to get through it and survive a bit. It was not what we wanted in terms of execution but these guys are human, right. It’s not like all of a sudden two days later we became a bad team. If you’re looking at why it was, it’s pretty easy to see why.”

Columbus isn’t a bad team. Rather, it would be premature to use three MLS matches to declare the Crew a bad team.

The issue of “good or bad” is similar in Minnesota, where the Loons are suffering through their own poor start to the season. The difference for Adrian Heath’s team is that there is no Champions League excuse to fall back on. Minnesota United’s zero points through three games isn’t due to fatigue or mental weariness.

Remember, Minnesota lost to Seattle in the Western Conference final in 2020. That showing wasn’t supposed to be the end of the journey for the Loons, but the beginning. To say expectations were high coming into the new year would be to undersell the situation in St Paul. Although Minnesota lost Molino to free agency and scrambled to find a center forward following the problems at that position in 2020, most observers put the Loons squarely in the hunt for a top-three seed in the Western Conference.

Through three games, Minnesota United has a loss to Seattle on the road and losses to Real Salt Lake and Austin at home. On paper, the two home losses looked like six points. Now, Minnesota faces a climb back up the table in the West with just 15 home dates left.

The Loons shouldn’t panic. The club is waiting on French forward Adrien Hunou to arrive after a transfer. The backline is in “makeshift” mode, with Bakaye Dibasse injured to start the year. Emmanuel Reynoso, the star of last year’s playoff run, has started slow. All of those things are likely to get better. When they do, Minnesota will be ready to make its move even if the bad start has dented the club’s ability to claim a top spot in the conference.

If there’s any club that needs to hear “don’t panic,” it’s FC Cincinnati. The only real guard against that is experience. The team has been here before, meaning “at the bottom of the table.”

Minnesota’s horrific start is the only thing keeping Cincinnati better than last in the combined MLS standings. That’s where they finished in both 2019 and 2020. This year was supposed to be different.

After bringing on Jaap Stam as head coach midway through last year, FCC spent big money in the transfer market to strengthen its team. Most of that spending went to the attack. Cincinnati paid $15m to add Brazilian striker Brenner and seven figures between the transfer fee and allocation money sent to DC United for the rights to Argentine creator Luciano Acosta.

Cincinnati’s problems are pervasive enough across multiple phases of the game that pointing out that Acosta has missed the last two matches seems silly. Still, it’s a factor.

FCC shouldn’t panic. Not because there’s much reason to believe that things will get markedly better, but because overreacting to the first three matches represents the same sort of self-sabotage that hurt the club in its first two seasons.

It’s too early to panic. That’s true whether you held real MLS Cup ambitions in 2021, or if the bar is much, much lower.