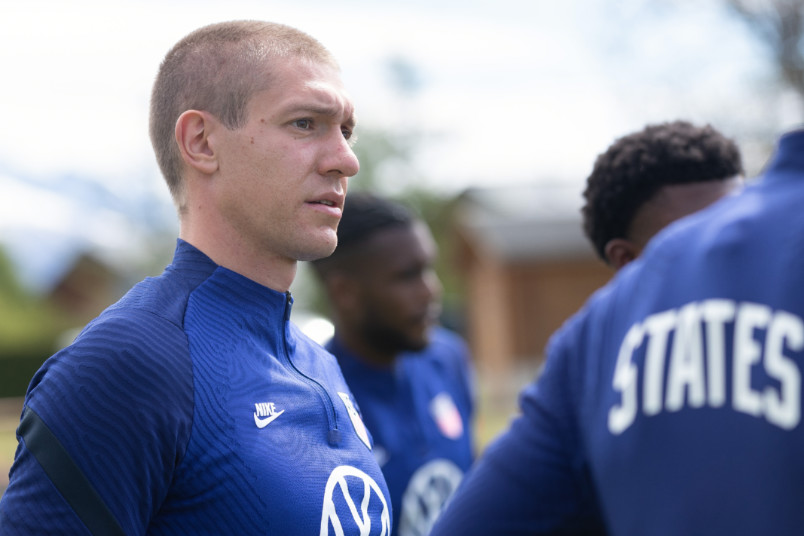 Friday’s soccer news starts with a preview of Sunday’s Switzerland vs USMNT friendly (2pm ET – ESPN). The game comes as the USMNT technical staff tries to mimic what the squad will face this Fall during the compacted World Cup qualifying schedule. The distance between Switzerland and Denver might be stretching things, but the next stop is the Concacaf Nations League semifinal and the first game that counts this year.

With the rest of 2021 about the Nations League, Gold Cup, and qualifiers, now is the time for players to lock down roles. There will be plenty of opportunities, with USMNT coach Gregg Berhalter clear that he will need to rotate players. That will be clear when he calls in what he’s already described as a noticeably altered group for the Gold Cup.

As for Switzerland, they’re no proxy for any team in Concacaf. Ranked 13th in the May 2021 FIFA Ranking, they’re preparing for next month’s EURO 2020. They play Wales, Italy, and Turkey in the group stage. Opening World Cup qualifying during the March window, Switzerland won 3-1 at Bulgaria and shutout Lithuania 1-0 at home.

Zack Steffen has a bigger game the day before with Manchester City, leaving Berhalter without his regular starter. In his place are Ethan Horvath, Chituru Odunze, and David Ochoa. Horvath is the veteran, playing through another season as the backup at Club Brugge. Horvath lost the starting job when his club brought in one of the best goalkeepers in Europe. Playing behind Simon Mignolet translates to not playing, a similar situation to Steffen’s at City. Horvath is a proven talent at club level, providing an insurance policy for Club Brugge at the expense of game time. Steffen is subbing in for Odunze on the Nations League roster, with Sunday’s friendly looking like an opportunity for Horvath.

In front of him, DeAndre Yedlin is available after recovering from injury at new club Galatasaray. With John Brooks coming off an extremely strong season for Wolfsburg and everyone well aware of what Sergino Dest did in his first season at Barcelona, if anything, Berhalter has too many first choice options. Reggie Cannon is in this group as well, drawing plenty of attention with his play at Boavista.

What this group of defenders represents is somewhat new for the USMNT. Options across the back with quality players capable of performing multiple roles. If Berhalter needs a lockdown backline or defenders capable of pushing forward, he has them.

This is the ongoing question with the USMNT. Berhalter has tinkered with his rosters and setup. It remains an open question what he’ll choose to employ game-to-game, especially considering how much he’s stressing squad rotation. A USMNT in theory needs to get listed midfielders on the field together at the same time. That’s more than finally seeing Christian Pulisic and Weston McKennie in the same lineup. It’s finding space for Gio Reyna and Tyler Adams along with options in Yunus Musah and Jackson Yueill.

A 4-3-3 likely pushes Pulisic and Reyna wide, but a free-flowing attack that sacrifices defense isn’t normally what happens on the road in Concacaf. How Berhalter uses his first choice squad needs to balance with what we see during the Gold Cup. Otherwise, he’d be creating two distinct groups that may or may not merge well when needed. A 4-2-3-1 answers some of that, stressing the defensive midfield and that link to move the ball forward. It’s also closer to what most MLS teams prefer.

Regardless, Berhalter is dealing with more than tactics. This is an expectation management moment. The coach has to show that he knows how to get the most out of groups of players. With talk of the quality in this group, Sunday is the beginning of a proof of concept that needs to end next week with a trophy. That will show that Berhalter is in control of a distinct version of the USMNT. The expectation for the Fall should be control of qualifying, and Berhalter’s choices can start sending that message now.

The USMNT’s options on the wing include some of the biggest names in the squad. Pulisic and Reyna can both play wide. They’re used to creating chances for some of the best target forwards in the game. Both can also tuck in behind the forwards, playing a different version of the game while allowing other positions to push forward. The result is normally about getting the ball to a standout forward to turn those moves into goals.

Berhalter has options here. His group of true forwards all stood out this season with European clubs. Matthew Hoppe is only in the squad for this game, with Pulisic listed among the forwards for the Nations League. Brenden Aaronson is also among the forwards but normally plays behind them. That leaves Josh Sargent, Jordan Siebatcheu, and Timothy Weah as the likeliest choices at the top of the attack.

Weah is in an interesting position after a season limited by hamstring issues. There’s no doubting his sense for goal, something he showed on-loan to Celtic before his permanent move to Lille. Ligue 1 isn’t as physical as Concacaf, but he has shown the ability to hold up in traffic and wait to turn on the ball. That translates into punishing moves, shots from distance, and the willingness to change a game.

Also in the soccer news, Weston McKennie has a new coach at Juventus, with the club moving on after one season under Andrea Pirlo. Massimiliano Allegri returns as coach, trying to return the club to its most recent era of success. That means winning Serie A as a foregone conclusion and taking the next step in the Champions League.

Juventus’s statement announcing the move drifted into the poetic. “And now we are ready to begin again with Allegri, to build our future together,” it reads. “With his enormous professionalism, his moral strength, with the brilliant ideas of a coach capable of shuffling the cards, both on and off the pitch. With his smile, a sort of “signature”. With his way of understanding football and life with simplicity, with his desire to play things down and with the commitment to enjoy every beautiful moment that being at Juventus can give and will give.”