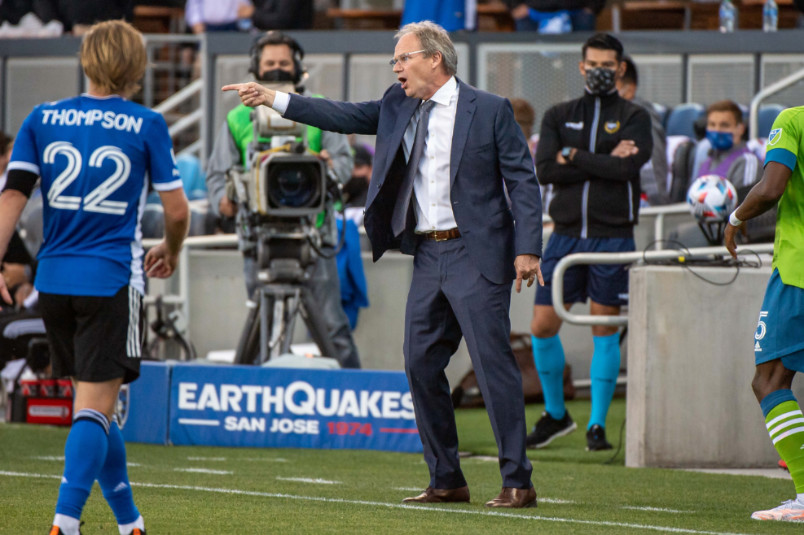 By Luis Bueno – RIVERSIDE, CA (May 19, 2021) US Soccer Players – The end of the 2020 season might have been the start of a down era for the Seattle Sounders. The club finished the year as runners-up in the MLS Cup final and went through some changes within its roster. That included the loss of longtime star Jordan Morris. Having appeared in four MLS Cups over a five-year span, some regression seemed natural. Few would have blamed the Sounders, given that recent history and the roster changes.

Instead, Seattle has shown why they are not just the top team in MLS over the last half-decade but why they have the chance to put together the best dynasty in league history. Not only have the Sounders not taken steps back, the club is putting together a masterclass of a season and setting an even higher bar for itself.

The Sounders lead MLS with a 5-0-1 record, matching their best start in its MLS history in racking up 16 points in their first six games of the season. More than one month into the league’s 2021 campaign, Seattle is far and away the frontrunners. It’s a bit early to be making such proclamations, but the club has the history to follow through with such early-season targets.

It all has to do with expectations. Seattle has had success since day one and has only continued to add to that. It took several years for that success to translate into a league championship, but the team now expects success to follow. Seattle is the only team in league history to reach the playoffs in each of its first 12 seasons. The LA Galaxy made the playoffs in the league’s first ten seasons, but several times that was eight playoff teams out of a 10-team field. In Seattle’s first season, the Sounders were one of eight playoff teams in a 15-team league. Last season, Seattle finished with the seventh-best record in a 26-team league.

Only a few short weeks ago, it looked like the Sounders were preparing for a downturn. The club bid farewell to key players Magnus Svensson, Joevin Jones, and Kelvin Leerdam. Star forward Morris also was lost for the year after a knee injury cut short his loan spell with Swansea City and the rest of 2021. On the eve of the season, star midfielder Nicolas Lodeiro was out due to a quadriceps injury.

Coach Brian Schmetzer pulled the strings to get the team ready for the 2021 season. To try and offset the losses and build around what he has at his disposal, the club switched formations to a 3-5-2. In doing so, Schmetzer has been able to unlock the potential that players like Nouhou Tolo and Brad Smith showed. Nouhou has been a bit of a revelation as one of the three defenders and has stabilized his play from when he played out wide as a fullback.

Smith also has been able to join the attack quite a bit more as a wide midfielder instead of splitting his time between the defensive and midfield lines. He is second on the team in goals with three and has helped pick up the offensive holes left by both Morris and Lodeiro’s absences. Lodeiro is available but has only played 24 minutes this season.

Schmetzer then tweaked the lineup again, opting for a 3-4-3 formation the last two games, which finished in wins by 1-0 over San Jose and 2-0 over LAFC. Even with such drastic formation changes, the Sounders’ defense has been impenetrable. The Sounders have allowed just two goals in six games this season. Only Orlando City, who has played one less game, has yielded so low a figure this season.

The last time out should have been the unofficial passing of the torch as Seattle utterly dominated LAFC. Even though Seattle was just in MLS Cup and eliminated LAFC from the playoffs in the 2019 season, LAFC still got the nod as the class of the Western Conference, at least in the regular season. Now, though, it is Seattle who has left no doubt that the Western Conference’s upper crust has just one member, and it’s the Sounders. LAFC’s offense was nonexistent, while Seattle carved apart LAFC and was unfortunate not to finish with a greater margin.

Seattle’s run should continue. The club has had limited fans in attendance, an improvement over last year when there were no fans allowed due to the Covid-19 pandemic. Once the team is able to welcome its full contingent of supporters back to Lumen Field, they’ll be that much more difficult to beat.

That seems to be the one constant from their time in MLS, ardent support. Whether known as Qwest or CenturyLink, the Sounders faithful have never failed their club for support in one of the league’s biggest venues. Thousands of loud and passionate supporters typically help energize the stadium and create an intimidating atmosphere which gives the Sounders an edge.

Lumen Field has been allowing 25 percent capacity, following Washington state public health guidelines. For the Sounders’ next home game, that increases to full capacity in several sections that will only be open to fully vaccinated supporters. When the rest of the stadium is at full capacity, the Sounders might be able to use that extra push to emphasize their stance atop the Western Conference and MLS as a whole.

An MLS Cup appearance in 2021 would be the club’s fifth time in the title game, all happening since 2016. No other team in league history can say that. DC United was in the first four MLS Cups, and the LA Galaxy had four MLS Cup showings from 2009-2014. With the league soaring past the 20-team mark, what Seattle is doing becomes even more remarkable. If the Sounders can win it all this season, there may never be a dynasty that reaches these heights again.