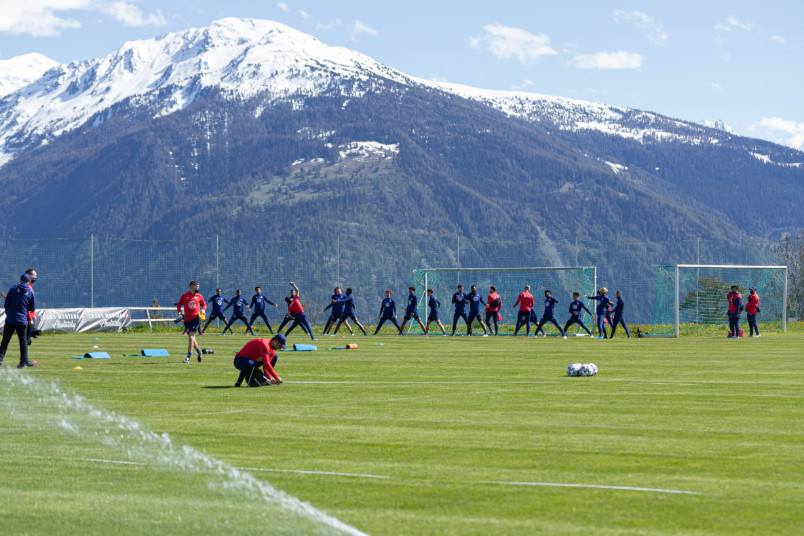 By Charles Boehm – WASHINGTON, DC (May 27, 2021) US Soccer Players – “It’s amazing to see the talent that’s here. And the ages of these players is incredible, and then how talented they are. I think we’re entering sort of a golden era for US soccer.”

That was DeAndre Yedlin’s assessment of the USMNT’s burgeoning youth movement as he made his first return to the program since 2019 this week. The 27-year-old fullback aptly expressed the optimism that’s been rising throughout the team’s fan base as well as the players and staff as 2022 World Cup qualifying finally approaches.

The catch, as always, is that all the big dreams and lofty goals must first survive the meat grinder of Concacaf. Its far-flung trips, intimidating away venues, cynical gamesmanship, imperfect refereeing, and drastically varied weather and field conditions are legendary. This cycle figures to be even more exhausting than usual, with more matches crammed into smaller time periods thanks to the delays imposed by the COVID-19 pandemic.

It could well be the most intense qualification campaign ever. The USMNT is about to enter the final countdown as they kick off a packed summer with a friendly against Switzerland in St Gallen on Sunday.

Preparing for the Concacaf Nations League finals and the rest of a demanding year by gathering in the heart of Old Europe might sound counter-intuitive. Instead, it’s the first phase in a carefully crafted plan to acclimate the squad to the altitude of Denver. That’s where the US, Honduras, Costa Rica, and Mexico will gather next week for the Nations League semifinals, final, and 3rd-place games at Empower Field at Mile High.

“We’ve kind of made an adjustment and we’re training up in the mountains, so we have a good, solid week of training here,” said veteran defender Tim Ream from the Swiss Alps on Tuesday. “I asked one of the staff members today and I think we’re only about 600 feet below where Denver is. So we’re doing things the right way, and we did the same before we went down to Azteca [to visit Mexico in the 2018 cycle]. We went to Denver, we trained for a week, because it was a June window as well. So we’re doing a lot of similar things, we’re making sure that our bodies get acclimated to the altitude and we’ll play a game.”

Beyond the physiological challenge of the thinner air, coach Gregg Berhalter and his staff have labored to build a schedule in this international window that replicates as much as possible the rhythms of qualifying. This time around, that means three matches per window in most cases rather than the previous norm of two. That will crank up the burden dramatically.

“The way we’re looking at this whole trip is, we’re going to travel with more players because we want to simulate what World Cup qualifying looks like, where you can interchange the 23 each gameday,” said Berhalter on Monday.

Following Sunday’s friendly vs the 13th-ranked Swiss, the group will jet halfway around the world and quickly pivot to Thursday’s Nations League semifinal vs Honduras. One way or the other, the tournament concludes with a game on Sunday. Any way you slice it, it’s three high-level matches in eight days. Squad rotation will be key, as well as recovery and resilience, just like a qualifying window.

“A lot of us haven’t done it, and it’s good preparation,” said Brenden Aaronson. “It’s really tough and it’s hard on the body, because you’re traveling what, eight hours back to the United States over a flight and then you have to get off the flight and get ready for a game in three days. So it’s one of the toughest parts about football and playing for your national team, but it’s always an honor and I think that you’re going to do whatever you can to get on the field, no matter what.”

To add another variable to the equation, most of this predominantly European-based roster just completed a demanding club campaign. In light of that, Berhalter & Co. might prefer these Nations League duels to be taking place closer to sea level, though he took care not to complain about the hand that Concacaf dealt.

“It is what it is,” said the coach and former USMNT center back. “Whatever venue that we play at, it’s an equal playing field for all the teams. We’re all playing on the same pitch, we’re all playing at the same altitude. We can only control and we’ll do it.”

Now an elder statesman with experience of qualifying cycles past, Ream alluded to the blend of mental and physical acclimatization that’s underway.

“Guys were struggling a little bit with the warmup today and once their lungs kind of adjusted they started to really get some good energy going,” he said. “Listen, it’s always difficult. It’s not just us, guys are playing all over the world, they’re not all playing at altitude. So it’s who can adjust better, who can get that edge in training to then take that into a game. I think we’re doing it right by coming here straight after everyone’s season finishes and getting a good solid week of training in, and then playing the game and have two or three days of training in Denver, and we’ll be ready to go for that first game against Honduras.”

The Nations League is a new addition to the Concacaf stable whose true value is still in flux. Still, it’s a fully competitive occasion with hardware on the line – perfect for whetting the appetites of a group that collectively won a dozen major trophies across Europe this season.

“You’re seeing where they’re playing, and they’re winning big trophies and it’s huge, it’s a really big step in US football,” said Aaronson. “So I’m really excited for that group of guys and now it’s just pushing on to the Nations League and then winning a trophy with this group of guys. So that’s the biggest thing right now. It’s the main focus for everybody here … this Nations League’s big, we can meet Mexico in the finals and Honduras is going to be a big game. So yeah, for me I’m confident, I’m ready to go and I think the team is too.”