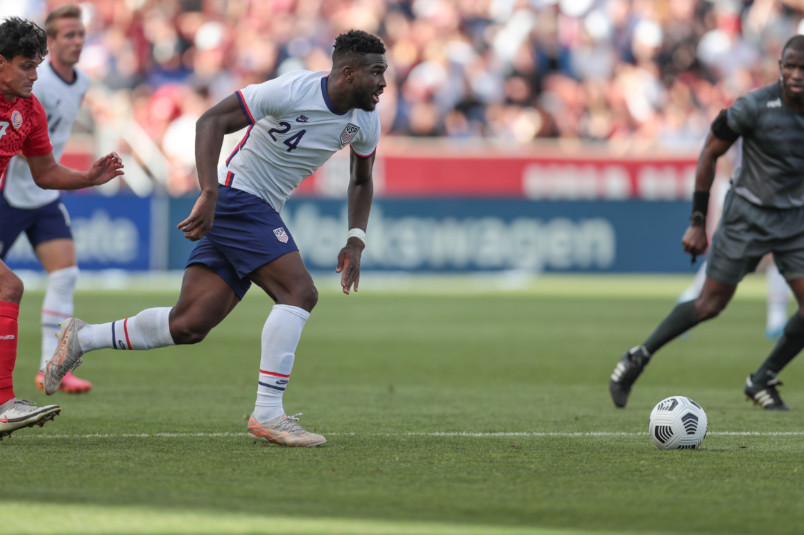 Thursday’s soccer news starts with the USMNT’s 4-0 shutout of Costa Rica in Utah. The next time we’ll see a version of the USMNT like this one, World Cup qualifying points will be on the line. With that in mind, USMNT coach Gregg Berhalter made significant changes while stressing the offense in the last game of the Nations League window. With trophy in hand, the USMNT looked dangerous from the beginning in a friendly setting.

Without Christian Pulisic or Weston McKennie, the USMNT relied on a new group of attacking players to start the scoring. Brenden Aaronson kicked off the scoring in the 8th minute with Daryl Dike showing he can get goals for club and country in the 42nd. Those two goals highlighted the depth the USMNT can now rely on at the point of attack. It’s a question now of which mix of players can do the best job, something that will add to Berhalter’s selection issues.

Mark McKenzie assisted on the Dike goal with Reggie Cannon scoring for the defense in the 52nd. That’s important considering that not every game in the Octagonal is against Mexico. The USMNT will have to adjust, shifting the point of attack and expecting the chances to fall. Gio Reyna demanding to take his penalty is another glimpse of how motivated this team is, which will drive this team forward.

Where pressure tells the story is in corners. The USMNT had five to Costa Rica’s zero. Costa Rica may have treated this game as more obligation than opportunity, but that can have serious implications for a team’s rhythm going forward. It just doesn’t work in Concacaf.

For the USMNT, it’s another shift of focus with Berhalter figuring out his group for the Gold Cup. With another trophy on the line, whatever version of the USMNT he fields will be playing in large part to show that they belong. Competitiveness across the roster, obvious depth, and players that buy into a plan. That’s what Berhalter is building and a friendly win in Utah shows that the project is on track.

Also in the soccer news, we got dueling announcements about the Super League. The Premier League imposed a $31m fine on the six breakaway clubs, calling it “a gesture of goodwill that “will go towards the good of the game, including new investment in support for fans, grassroots football and community programmes.” The Premier League also plans to change its rules to add a 30-point deduction and a $35m fine should any club become part of a breakaway.

Meanwhile, UEFA announced it is still considering its options over the unrepentant three Real Madrid, Barcelona, and Juventus. “UEFA understands why the disciplinary proceedings needed to be suspended for the time being, but remains confident in and will continue to defend its position in all the relevant jurisdictions,” their statement read.

The National Soccer Hall of Fame announced its class of 2021. Christie Rampone, Steve Cherundolo, and Jamie Moreno join as players with former DC United executive Kevin Payne as a builder. The induction ceremony is on October 2.

In other news, the National Football League announced its plan to stage games in Germany. Step one is finding an interested city. “This process is designed to explore potential local partnerships, stadium suitability and game logistics,” NFL head of UK and Europe Brett Gosper said. “We need engaged and motivated host partners that span the public sector, venue, sport, community and major event spheres and can help us deliver a high-impact event and a long-term partnership. Identifying a preferred host city is a key step in bringing regular-season NFL games to our millions of German fans.”

MLSsoccer’s Matthew Doyle has his takeaways from the USMNT win. Soccer America’s Paul Kennedy stresses how the USMNT closed out this part of the schedule and the end of Ronald Gonzalez’s run as coach of Costa Rica. SI’s Brian Straus on the Hall of Fame class of 2021 and the voting procedure. DW explains how UEFA is handling the different national pandemic restrictions during EURO 2020. The NY Times’ Rory Smith and Tariq Panja on the potential for too many games catching up with Europe’s elite players.

Congrats, Coach!@lvlightsfc coach and @ussoccer legend Steve Cherundolo has been inducted into the @soccerhof.#LAFC | #NSHOF21 pic.twitter.com/Yzp2fFd3JN

The Cup Winners’ Cup didn’t make it into this century, but there’s a direct connection between that tournament and Italy’ winning Euro 2021.