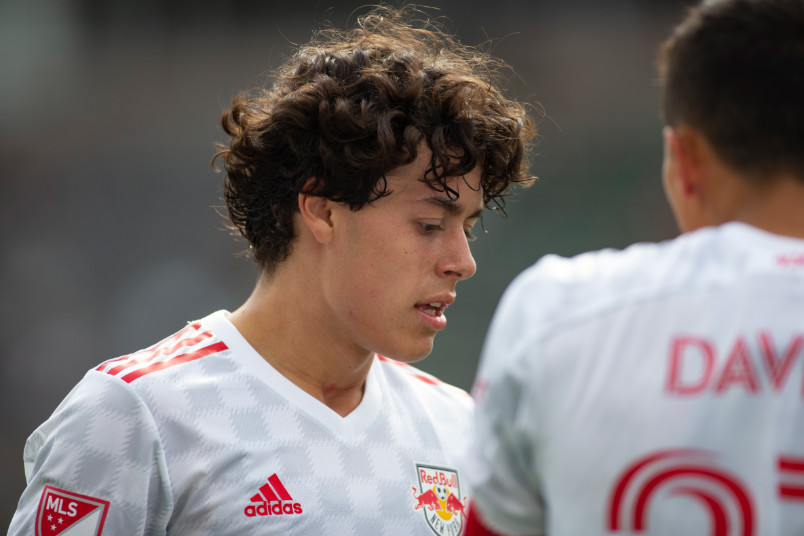 By Jason Davis – WASHINGTON, DC (Jun 25, 2021) US Soccer Players – If there’s such a thing as a “soccer hack,” in the same vein as the “life hacks” that permeate on the internet in the 21st century, then the Red Bull global soccer empire seems to have figured it out. Just three years after snagging up-and-coming American phenom Tyler Adams from the New York outpost of the energy drink’s world network of teams, RB Leipzig has again acquired a young American talent through its MLS franchise.

Both sides of the Red Bull machine announced on Thursday that Leipzig completed a deal for 18-year-old Caden Clark for an undisclosed fee. Clark will remain with the MLS Red Bulls through the 2021 season on loan before departing for his new club in the winter. In an ever-changing transfer market that is still depressed because of the financial impact of the COVID-19 pandemic, guessing at Clark’s value seems like a fool’s errand.

The direct connection between the two clubs suggests an easier time making a deal. It’s the purpose of a system designed to develop a broad base of talent. Clark, a Minnesota native, landed in New Jersey out of the Barca Academy based in Arizona specifically because the Red Bulls could provide a direct pathway to Europe. Now, he gets his chance to move to a top league on the Continent almost immediately after becoming eligible to do so.

Clark is hugely talented but faces the same uncertainty all young players do when taking a big step up in competitive level. Playing time will come at a premium at Leipzig, and adapting will determine his success or failure. Making a move to a new country at such a young age is fraught with challenges that aren’t obvious to fans. Clark will need a strong support system, both within the club and outside of it, to thrive.

Part of the internal support will come from the American presence at Leipzig. Adams is a fixture in the squad that finished second to Bayern Munich this past Bundesliga season and is ambitiously eyeing its first major trophy. Adams’s rise as a midfield and wingback contributor under Julian Nagelsgmann was part of the greater growth of American influence in Champions League clubs across Europe this past season.

It will help Clark that Adams made the same jump from the Red Bulls and MLS to Germany. RB Leipzig building an American contingent of players will only make the club more attractive to rising talent in the US. This comes at a time when European clubs are scrambling to capitalize on the talent emerging across the country.

Adding to its American contingent might also enhance Leipzig’s chances of capturing more American fan interest. If Clark gets playing time at the club, Leipzig will be one of few places, particularly among Champions League-caliber teams out of top five leagues, with two Americans on the field.

Leipzig also has an American at the helm. Jesse Marsch’s rapid rise through the Red Bull system, from coaching the New York Red Bulls to serving as an assistant at Leipzig, then to leading Red Bull Salzburg, and finally landing as the boss at RB Leipzig, makes him the first of his kind. That alone would earn Leipzig attention from American quarters in the new season. With a trio of Americans in Leipzig starting in January, the Bundesliga team could become the new go-to European club for fans across the United States.

RB Leipzig may not be an easy sell within Germany, but it’s closer to the North American sports model. That’s at issue there, but what American fans might accept from an MLS club might not work for a team in the Old World. There’s no getting around the “manufactured” nature of teams in American soccer, with its choppy history of leagues and competitions. In a European nation steeped in history and soccer culture, however, the idea of buying a club, putting an approximation of a company logo on its shirt, and climbing the ranks of the league pyramid is a problem.

How much that may or may not matter here is a fair question. Time will tell if Americans will adopt RB Leipzig the way so many soccer fans did during the height of Fulham’s love affair with American players. Or, will Leipzig just move up the list of European clubs to keep an eye on because of its ties to the US game?

The way Americans interact with the sport, both at home and abroad, is unique the world over. There are as many different approaches to being a fan as there are states in the union. There’s no requirement that American fans fully adopt Leipzig. Support can flow in the direction of Adams, Clark, and Marsch without turning into full-blown fandom. Then again, success always resonates.

Should RB Leipzig continue to win, their profile rises. That could include another American currently in the Red Bull family of clubs potentially joining Adams and Clark. Former Philadelphia Union homegrown Brenden Aaronson just completed an excellent half-season debut with Red Bull Salzburg playing under Marsch. It’s not difficult to imagine that the parent club in Leipzig might want to scoop up the New Jersey product and bring him to Germany before other suitors swoop in.

For now, Clark’s story is a promise of things to come for young American players. He was essentially recruited – by an MLS team in his home state who he turned down, by the Barca Academy in Arizona, and by the Red Bull system – before quickly moving through the various steps on his way to Europe. The Red Bull’s setup was perfectly suited to developing Clark in its USL team before pushing him to the senior MLS side. From there, the jump to Leipzig came into focus. For both Clark and Red Bull’s soccer empire, the hack worked.