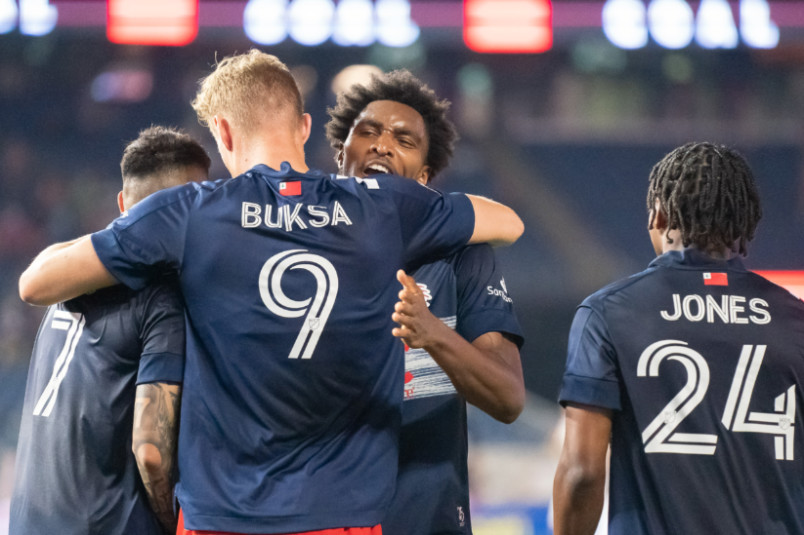 By Luis Bueno – RIVERSIDE, CA (Jun 2, 2021) US Soccer Players – The 2021 MLS season is not at the halfway mark, but the league is taking its first of two international breaks in June/July. This one will help some struggling teams while hurting those who look like they are starting to figure things out. We already see a clear amount of separation at the top of the conference tables. That’s not exactly surprising. Enough MLS clubs have already played themselves into the kind of trouble it will take more than international breaks to sort out.

The only team in MLS without a loss is Seattle. Finishing May without a goal in 174 minutes is a concern but far from a crisis. This team is the class of MLS through the first two months with the rest of the conference trying to come up with a way to take a full three points off of them. So far, that doesn’t seem likely.

The Revs have surged to the top of the Eastern Conference with three consecutive wins to close out the month. Carles Gil has a league-high five assists, with Adam Buksa scoring in the last three games. New England will only continue to improve, setting up a months-long battle with at least four other teams for Eastern Conference supremacy.

Kacper Przybylko looks like the deadliest striker in the league, at least for the most dominant. Przybylko is lethal on set pieces and has a knack for getting his head on the end of a free kick or corner kick. With that sort of force up front Philadelphia can control games by making it hard on the opposing defense. It should also keep the Union in the top five of these rankings.

Orlando City is one of those teams who will fight with New England for the top spot in the East. Orlando’s last outing was a bit uncharacteristic as the club lost 2-1 to New York. The two goals represent half of the total that Orlando has yielded this year. Still, that tough defense has carried Orlando far through these first two months.

The Galaxy moved up four spots from last month despite a 3-0 loss at Portland. That’s how impressive the Galaxy has been. The team is playing like a contender and has the mindset of one now. Goalkeeper Jonathan Bond earned his paycheck against San Jose, making quality save after quality save in a 1-0 win last time out. With Greg Vanney’s recent track record of success, it looks like the Galaxy is here to stay.

Columbus took a tumble down the rankings. That was partially due to some more impressive play from the teams passing the Crew. Still, Columbus did not help itself by dropping a 1-0 result to New England. Columbus is still quite solid, though. Games against Philadelphia (June 23) and New England (July 3) should help determine if the Crew can push back up the Eastern Conference table and this one.

Sporting KC has figured out its offense, winning its last three games by a combined 9-3 score. Still, the wins came against Vancouver, San Jose, and Houston. Sporting KC plays the Galaxy on July 4 and Seattle two weeks later, so the club might pile on more hapless opponents before playing other top Western Conference teams.

NYCFC went down to 10 men on the road to LAFC but still could find the match-winner to steal three points last time out. Although the luster has fallen off of LAFC, the win highlighted this tough-as-nails NYCFC squad. NYCFC will need that mettle when play resumes. They face New England and Atlanta in a four-day stretch later this month.

May was a great month for the Rapids. After dropping a 3-1 result to Austin FC, Colorado won four of five games, climbing to 4th-place in the Western Conference. They’re ahead of preseason favorites LAFC, Portland, and Minnesota. Colorado resumes play against FC Cincinnati before facing Western powers Sporting KC and Seattle. Those games could determine in which direction Colorado heads over the summer.

Atlanta’s record is a bit deceiving. The club is in 8th-place in the Eastern Conference heading into the break with a 2-1-4 record. They can’t quite figure out how to win or how to close out games. Against Seattle, Atlanta scored late to snag a point against the league’s top team. Against Nashville, Atlanta let in goals in the 80th and 83rd to minute to drop a pair of points. While just two wins and 10 points is not great, it is a solid spot to regroup from after play resumes later this month.

Nashville SC is trying to figure out how to win. The club picked up a nice 2-0 result over Eastern leaders New England but did not follow that up with more victories. They scored two late goals in a 2-2 draw with Atlanta United. Nashville has a solid defensive foundation set a year ago, but the team needs to develop a winning mentality to go along with it.

Perhaps no team needs a three-week break more than the Timbers. Portland has had a bit of a ride over the last month or so. The club started May off with a 4-1 loss to FC Dallas, then fell by 3-1 in a Champions League quarterfinal match at Club América and followed that up with a 2-1 loss to Seattle. Portland righted its wrongs by beating San Jose and the Galaxy by a combined 5-0 before falling hard to Philadelphia by 3-0. If nothing else, Portland needs to relax and try and focus on building up some positive momentum and consistency. That might start with a complete break from soccer.

May looked to be getting away from the Red Bulls after losses to Philadelphia and New England. They responded with a 2-1 win over Orlando City. Not only did the win show New York’s resiliency, it came against a top Eastern team. That gives the team hope that it can compete with the best the East has to offer.

RSL sits in 8th-place in the Western Conference table, and that’s without significant contributions from Albert Rusnak. He isn’t going to Euro 2020 with Slovakia, meaning Real Salt Lake restarts with a stronger lineup than expected. Rusnak’s scoring would make the difference for this team.

5th-place in the Western Conference might seem a bit lofty for this club, especially after losing two of its last three matches, but that is where the Dynamo finds itself after eight games. Some of that is due to the poor play of several fellow Western Conference clubs. Houston’s three wins may suggest more from a club does not look overmatched.

No team has fallen off quite like LAFC. Carlos Vela returned from injury, Diego Rossi is in the lineup, but somehow LAFC is not the same as it has been in its first three years. Goal scoring is the obvious problem, evident when the team went up a man against NYCFC and ended up losing.

Of all the poor teams in MLS, CF Montreal is the best of them. Montreal’s results have been rough. Losses to FC Cincinnati, Vancouver, and Atlanta in May with a late 1-0 win over bottom-feeders Chicago. Still, only three Eastern Conference teams have more points than Montreal’s 11. Montreal is a bit of a conundrum trying to work out how not to drop points.

San Jose is proving to be an all-or-nothing club. Unfortunately for the Quakes, May was mostly nothing. San Jose has a 3-5-0 record. Had even one or two of those losses been draws, they’re higher up this table. San Jose plays to win and nothing else, apparently. The last four games were rough, losing to Seattle, Portland, Sporting KC, and the Galaxy.

Vancouver might have shown its true colors at the end of May. After a promising start, they’ve dropped the last three matches by a combined 6-1 score. Vancouver’s poor offensive output is troubling. The club’s play has been mostly drab as the ‘Caps struggle to generate scoring chances. Some sort of tactical change would benefit this team more than new players. It’s the system keeping the club from producing chances.

Minnesota snapped out of its four-game losing streak to start the season with two wins and a draw in its last three games. Perhaps the club can shake off that early start, learning from the negatives and building on the positives. The only issue with that is that the poor results count against Minnesota in the table.

In its last four games, Toronto FC played some of the top teams in the Eastern Conference. What we saw was a club struggling to keep up. Toronto FC did get a win, a 2-0 win over the Crew on May 12, but also lost to the same Crew side 2-1 on Saturday. That stretch of games included a draw against NYCFC and a loss to Orlando City SC. Perhaps catapulting into the Eastern Conference’s upper echelon isn’t quite the ceiling for this team.

May quickly turned around in a good way for DC United. The club lost the first two games of last month by a combined 7-2 but then finished the month with a respectable six points from four games, punctuated by a 3-0 win over Inter Miami. Unfortunately, DC hits the break following a game when things finally look like they are coming together.

When the US national team played Switzerland, on the field were the likes of Reggie Cannon, Weston McKennie, and Josh Sargent, all FC Dallas products. The team should feel proud of sending products like that abroad and to the national team. Meanwhile, Dallas is at the bottom of the Western Conference with six points through seven games. That has to raise questions about going all in on player development in this league.

Austin FC is proof that not all expansion teams will look like Atlanta United and LAFC, at least not from the start. They may not even look like last year’s expansion class, with both of those teams making the playoffs. Austin has hit a rough patch with no goals scored in its last three games. At least the club will open its home this month, and that could send a jolt through the team.

The bottom is not falling out from Inter Miami quite yet. Since a strong 3-2 win over Philadelphia on April 24, Miami is 0-4-2 with three goals scored in those six games. Worse, Miami looked downright poor in a 3-0 loss to DC United. Miami has quite the collection of talent, and yet the goals are not coming.

First, the bad news: Chicago scored one goal in five games in May. The good news was that goal was the difference in a 1-0 win over Inter Miami. Chicago’s offense is the worst in all of MLS. They’re last in goals scored with four, and Luca Stojanovic scored three of them. A potential bright spot, Chicago will play nine of its next 12 games at home.

Well, FC Cincinnati won a game, beating Montreal 2-1. However, the club followed it up with a lackluster 1-0 loss to New England. Getting points is the struggle for Cincinnati, with no guarantee that this club will suddenly get it together. MLS may be a streaky league, but that requires clubs putting themselves in a position to win.