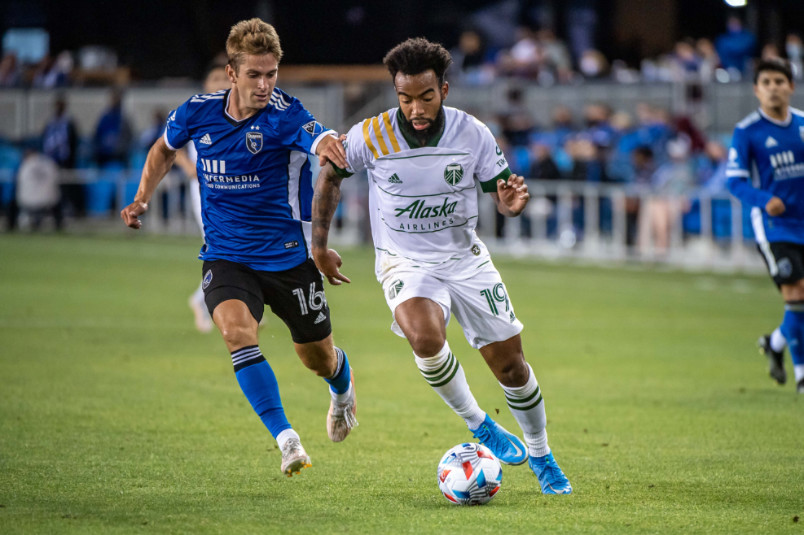 By Luis Bueno – RIVERSIDE, CA (Jun 16, 2021) US Soccer Players – As MLS gets ready to resume play following a three-week international break, some Western Conference teams have taken on roles. Seattle is the front-runner, sitting comfortably atop the Western Conference. The LA Galaxy is the biggest surprise after a surprisingly strong start. City rival LAFC is the biggest disappointment as the fourth-year club flounders toward the bottom of the table.

Portland, meanwhile, could take on several labels. Underachievers. Injury-riddled. Unfortunate. Inconsistent. While all those represent the club in one form or another, perhaps the label that fits the best is that they’re the most week-to-week club in MLS.

The talent is there for the Timbers, but the results suggest otherwise. Through the first two months of the season, Portland sits in 7th-place with a 3-4-0 record. They’re a full nine points behind 1st-place Seattle.

Yet Portland seems to be on a much better foundation than the clubs right around it in the table. The Timbers are two points behind Houston, even on points with San Jose and Real Salt Lake, and one point ahead of LAFC and Austin FC. If one club emerges from that group to challenge Seattle for the top spot, Portland seems the best candidate.

The club’s up and down ways might eventually prove more costly, though. This version of the Timbers also has one more label it could own, the oldest squad in the league. The time is now to get something out of this group before age catches up. Portland is facing a scenario where they’ll have no choice but to change the core of its roster simply because that core might age itself out.

Portland’s top three players have been in place since 2017: Diego Chara, Diego Valeri, and Sebastian Blanco. Chara has been one of the best midfielders in MLS since he joined in 2011. In that span, he has amassed 25,025 minutes over 285 games played with all but three starts. Chara might be a yellow card waiting to happen, accumulating 87 cautions in his MLS career. He’s always toed the line between effective physical presence and liability.

Valeri joined Chara in Portland in 2013. He’s also been a standout midfielder with 85 goals and 89 assists in his 240 career matches with the Timbers. Like Chara, Valeri has shown no indications that his quality is falling off. Valeri remains the team’s inspirational leader as he plays with passion and emotion.

Blanco completes the midfield triumvirate. He joined the Timbers for the 2017 season, adding creativity and an attacking flair. Unfortunately, Blanco tore a knee ligament in September and has yet to make his 2021 debut.

Perhaps because of that, Portland does not have as many points as it should. This team is only two-plus years removed from an MLS Cup appearance and, with a little luck, could be prepping for a Concacaf Champions League semifinal appearance.

The trio is certainly quality, but no player lasts forever. Chara and Valeri are each 35, while Blanco is 33. So the clock is counting down for the Timbers. A year from now, age may have caught up to one or two of those players, and the Timbers might have to try and reinvent themselves with new players leading the way. That’s if this version of the team makes it to next year. Chara has missed time with a hamstring injury. How Blanco looks upon making his return, which seems imminent, is also a question.

Still, Portland has quite a bit of upside this season. If Blanco does come back and returns to form, he instantly upgrades the midfield. Portland has scored just nine goals this season and will need to find more goals down the stretch to compete out West. That’s not a throwaway sentence. Sporting KC leads the league with 16 goals scored, with Seattle in second with 14. Colorado is just behind with a dozen, while Houston, San Jose, and the Galaxy have each scored 11. That’s more than all but one Eastern Conference team, NYCFC with 13.

Felipe Mora joined Portland from Liga MX side UNAM Pumas where he had success finding the net. More though has scored just twice this season and in the same game. Mora’s output could benefit from a return to health by teammates. Blanco will help create space and opportunities for Mora, but teammate and fellow striker Jaroslaw Niezgoda is also injured and should return sometime this season. However, that might not happen until later this summer, so the pressure will be on for Mora to produce more. That’s when he gets back from Copa America duty with Chile.

One of the players who looks set to carry on the mantle in the midfield is Eryk Williamson. After missing out on the USMNT Under-23 Olympic qualifying roster, Williamson has turned that bit of misfortune into stellar league play. Even with Valeri around, Williamson has been the best Timbers player in the midfield, if not on the entire roster. Williamson has a goal and two assists to his credit, and his tireless play and quality on the attack have helped the club tremendously with Chara missing three games and no Blanco.

Portland’s biggest obstacle might be overcoming the season-ending injury to goalkeeper Jeff Attinella. Fellow goalkeepers Ante Ivancic and Steve Clark are also out with injury, and emergency replacement goalkeeper Logan Ketterer came and went. Ketterer looked solid in his three-game stint with the Timbers, but he’s returned to El Paso Locomotive FC after the short-term loan expired. Teenager Hunter Suite might have to lead the way, but he showed his inexperience in his two games’ worth of action.

If Portland can get past the goalkeeper issue, which is no small task, the club could be in a position to make a summer surge. The pieces are there to make that happen, but it’s just a matter of getting them back healthy and out from under the black cloud that has followed the Timbers around in 2021.