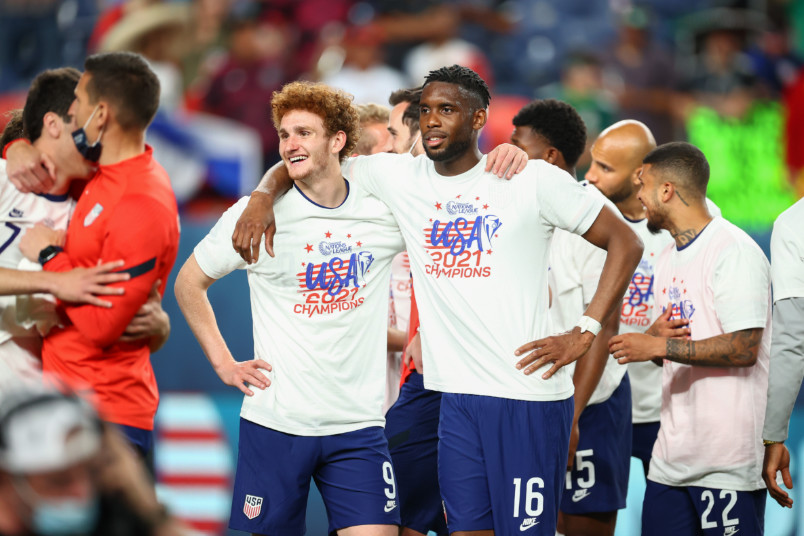 By Clemente Lisi – NEW YORK, NY (Jun 7, 2021) US Soccer Players – The Concacaf Nations League Finals, the first stop along the long summer road of international matches for the USMNT, concluded Sunday with a thrilling US win against Mexico in extra time. Winning the Nations League gave the USA’s new generation a trophy and a victory against their biggest rival.

The USMNT’s European-based players have a lengthy list of trophies at club level this season, but the Nations League proved once again that Concacaf play is different. Concacaf opposition can be tough, regardless of who you play, with matches often more physical and heated when compared to pretty much anything else in soccer.

Sunday night’s 3-2 win in Denver had plenty of drama, giving the USMNT a chance to build team chemistry and test a backline that has had problems in the past. Then there were the individual efforts by the likes of backup goalkeeper Ethan Horvath, midfielder Weston McKennie, and striker Christian Pulisic.

Most of the Nations League squad will miss the Gold Cup, which takes place later than usual when it starts on July 10. That means that competition will feature a roster composed primarily of MLS players because of the start of preseason in Europe. Those players will rejoin the team once World Cup Qualifying starts in September, the biggest test this group faces this year.

With the Nations League Finals complete, here are three takeaways that could impact the upcoming Gold Cup and World Cup Qualifying.

Wins certainly help to build character. Sometimes it takes a blunder to bring out the best in your players. Both happened against Mexico.

Mexico’s goal in the first minute meant the US had to play catch up from the start. A defensive error, combined with when the goal arrived, could have served as an intimidation factor. Instead, the backline held up. The USMNT caught a break midway through the first half when VAR canceled a second Mexico goal for offside. The Americans equalized through Gio Reyna soon after and swung the momentum, albeit temporarily, back the other way. It’s this type of character that will really matters during the slog that is World Cup Qualifying.

In the 1-0 win against Honduras in the semifinals, the US went 89 minutes without a goal before snatching one via substitute Jordan Siebatcheu, a striker playing in just his fourth senior
international. It was the type of gritty performance we’ve seen from the USMNT before. Against Mexico, they came back from behind twice. It’s talent, in addition to a never-say-die attitude, that helps to build a winning character.

Even the world’s best teams give up bad goals. In Concacaf, teams are hungry and aggressive, meaning the US backline needs to remain compact and cohesive if it wants to win big games.

Center back John Brooks is a key veteran on a team loaded with youngsters. He doesn’t give away the ball easily and often wins duels with opposing strikers. He’s quick to jump on every ball that comes into the US’s defensive third and is able to break up plays and move the ball up the field. Brooks assisted on the US goal in the semifinals. Serginho Dest and DeAndre Yedlin, playing on the flanks, like to move forward and aid the attack. That means the 3-4-3 looks more like a 3-2-2-3, leaving more space in the back that needs covered. That requires defenders who possess speed, tenacity and an accurate reading of what your opponents are planning to do offensively.

Zack Steffan played well in goal, but had to leave the game in the second half after an injury. Horvath, his replacement, came in and made several key saves. His biggest, to thwart a penalty kick by Andres Guardado’s in the 124th, is a big reason why the USMNT won the Nations League.

Pulisic and McKennie come up big

Offensively, all eyes were on Pulisic, fresh from winning the Champions League with Chelsea, and McKennie, who had a wonderful season at Juventus. Both came through against Mexico.
It’s true that the win was a team effort, but both players, tightly marked by Mexico throughout the contest, showed what individual skill and character can do. The experience Pulisic and McKennie have accumulated over the past few seasons have helped the US get better. It’s a new generation of USMNT players starting at the highest level.

McKennie’s header in the 82nd minute tied the game and pushed it to overtime, while Pulisic’s penalty kick in the 114th proved to be the winner. Along with Horvath, Pulisic and McKennie were the biggest contributors on the night. It was a memorable game for the United States and one that needs to carry over at the Gold Cup and World Cup Qualifying.