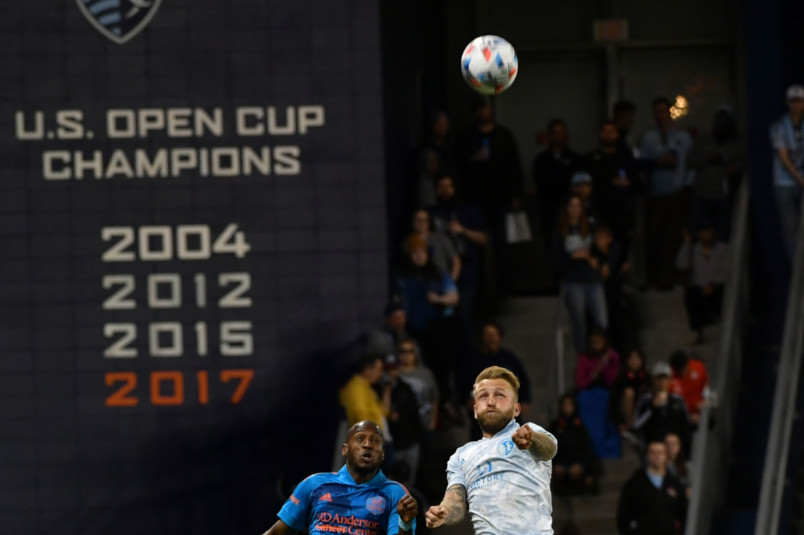 By Luis Bueno – RIVERSIDE, CA (Jun 23, 2021) US Soccer Players – The Seattle Sounders are threatening to run away with the Western Conference. Seattle is the only team in MLS yet to taste defeat this season and is coming off a decisive 2-1 win at the LA Galaxy. Some of the teams who were supposed to contend for the regular-season title are well off the mark. Portland is in 5th-place, but both LAFC and Minnesota are much further down the table. The Galaxy is trying to recapture its glory while other hopefuls like Real Salt Lake and San Jose struggle to find their footing.

The likeliest challenge to Seattle’s inevitable throne is Sporting KC, four points off the top spot in 2nd-place. The clubs play three times this season, but the first of those meetings won’t come until late next month. Sporting will have plenty of chances to close the gap from now through the end of the season.

In terms of proximity, Sporting KC is the closest. Whether or not it is realistic for Sporting KC to stick around remains to be seen. Lumping Kansas City in with the Western Conference contenders has been easy for more than a decade now. Much of that has been just an automatic reaction based on its 2009-2013 run.

Since then, though, Sporting KC has been mostly fool’s gold. This year could be the tipping point for the program. Either they’re in contention, or they’re yet another MLS team waiting to hit the reset button and start from scratch. Fortunately for Sporting, they have all the makings of a perennial contender. That includes a hard-nosed coach, a reputation for playing in a disciplined and organized manner, and a rabid fan base that makes for an intimidating home venue.

Yet the results have not backed that up. Sporting KC has gotten past the first round of the playoffs just twice in the seven years since winning MLS Cup. The team finished in 1st-place in the regular-season Western Conference twice in that span but has done no better than 5th in the other five seasons.

This year could be different. For starters, the competition is less threatening. Seattle is the class of the West, but the other teams in the top seven all have question marks. For example, 3rd-place Colorado is certainly an up-and-coming club. They also lack experience. That could prove costly if the club does not know how to manage success and being in contention down the stretch. The Galaxy sits in 4th-place. While they’ve been one of the season’s surprises, the team has been in disarray since the end of the 2016 season. Portland has injury concerns and trying to stave off old age. Real Salt Lake and Houston are in the same spot as Colorado, teams that have not had consistent recent success trying to stay in contention.

At a glance, it certainly appears that the Western Conference should be a two-team race between Sporting KC and Seattle. However, Sporting KC’s match on the weekend against Portland raised some concerns. Sporting KC held an early 1-0 lead but allowed a pair of sloppy first-half goals and trailed by 2-1 at halftime. They failed to score in the second-half.

The club’s defense let it down, but that’s not exactly been a strength for this team. Sporting KC has allowed 13 goals this season, tied with Houston and the Galaxy among teams in the Western Conference’s playoff positions. Sporting KC has just one clean sheet this season, failing to shutout Austin FC in two meetings this season. The expansion club scoring a conference-worst six goals so far.

Sporting KC has transitioned this year defensively as longtime defensive stalwart Matt Besler and the club parted ways in the offseason. Besler’s contract ran out, and the club deemed him expendable as Besler signed with Austin FC. As a result, the club has turned in part to Ilie Sanchez, who has played mostly midfield since joining Sporting KC to replace him.

Finding success without Besler is a step, but it could also prove to be a liability. Gianluca Busio has been a stalwart in the midfield for Sporting KC, helping both on the attacking end as well as defensively. Busio has drawn interest from European sides as Busio holds an Italian passport. If Busio makes a move to the Old World this summer, his departure will create a hole the club might struggle to fill. They could slide some pieces around to help cover the defensive midfield, the most likely scenario being Sanchez sliding into the midfield.

Sporting KC, though seemingly has enough on the attacking end to stay with Seattle. Alan Pulido leads the club with five goals and is one of the top scoring talents in the league. Fellow striker Daniel Salloi is coming on strong with three goals in his last five games and could surpass his season-high 11 goals scored in 2018.

Perhaps what favors Sporting KC the most is Vermes. His approach has helped create a successful culture and a strong mindset. Vermes designs teams that are difficult to play against. While the club has not been able to replicate its MLS Cup title from 2013, they’re consistently one of the toughest draws in the league over the last decade-plus, outside of a miserable 2019 season.

Winning should be the ultimate goal, and that is where Sporting KC has fallen short. The club needs to put everything together and not just threaten Seattle but provide a viable challenge to the Western Conference frontrunners. Just reaching the playoffs and bowing out before the conference final should not be good enough for this version of Sporting Kansas City.