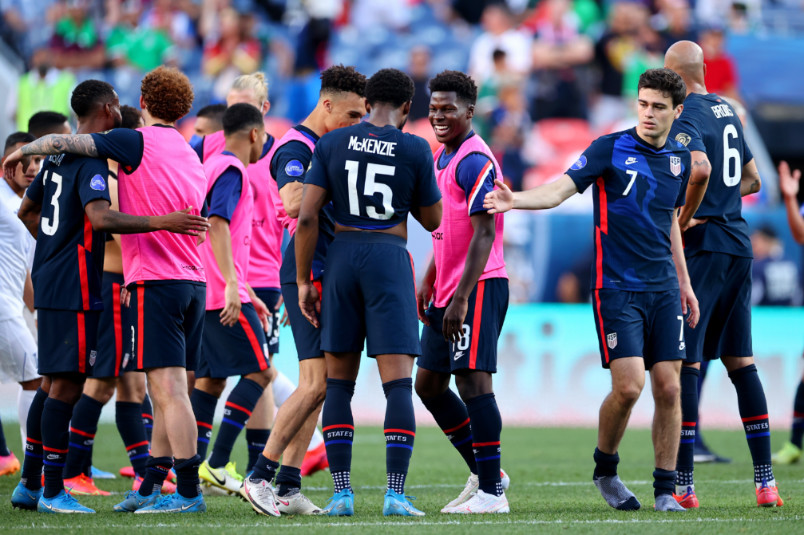 Friday’s soccer news starts with the USMNT advancing to Sunday’s Nations League final against Mexico (Sunday, 9pm ET – CBS Sports Network. There’s no denying the importance of this new competition for Gregg Berhalter and his squad. Berhalter prioritized it through his squad rotation, bringing in top players for a compacted training camp and plenty of travel. The idea was to mimic what US Soccer’s technical staff expects to see home and away in Concacaf during the three-match international windows starting in September.

Relying on a late goal may help with that. Jordan Siebatcheu played the super-sub role, with the USMNT hanging on to knock out Honduras and advance. That’s the kind of scenario that may not completely silence critics of the process, but it’s the United States moving to a game with a trophy on the line. Here are three takeaways from Honduras 0 – USMNT 1.

Sargent on the line

Josh Sargent’s goal line save was a difference-maker in this game. With Zack Steffen playing out of his goal, a shift exposed the USMNT. Sargent had the presence of mind to shut that down. That’s the kind of big moment that should resonate, showing that this is a squad that can rely on each other.

Carrying that forward is part of the point of what Berhalter is getting from his team right now. It’s figuring out what does and doesn’t work and what they need to take that next step. USMNT success requires playing to the norms of Concacaf while at the same time staying aware of the bigger global standard. It’s not enough to grind out results the Concacaf way.

Everybody’s new favorite soccer pundit said as much on the panel show that preceded Honduras vs USMNT. Clint Dempsey’s swagger is still very much in place, on display when he asked about the USMNT’s strength of schedule. This is a team playing to impress in the region en route to taking their game to the World Cup stage. That’s the ultimate goal here, the conclusion of this process.

Dempsey made that clear, stressing what the squad needs now and how they should build. It’s the new star players adapting their games and maximizing opportunities. When Gio Reyna bluntly said he needed to convert his chances in a postgame interview, Dempsey responded accordingly. There’s a difference in pressure that those that have experienced it understand.

The latest look at the back four

Antonee Robinson, John Brooks, Mark McKenzie, and Sergino Dest along the back this time, with Brooks receiving most of the praise for stepping up. Once again, it’s moving on from a friendly where the criticism was about roles and spacing. At the next opportunity, Brooks, McKenzie, and Dest showed that they learned from what happened against Switzerland. Those three stayed on the field throughout the 90 minutes against Honduras.

Robinson was in for Reggie Cannon, with Berhalter showing that he can mix up his backline without a dropoff. That’s important when the USMNT has no choice but to rely on its defense to keep it in games. That could come as early as Sunday against a motivated Mexico. Say what you will about the Nations League, the teams involved are taking it very seriously.

SI’s Brian Straus lists his takeaways from the USMNT’s win over Honduras. The Washington Post’s Steven Goff focuses on squad development. ESPN’s Jeff Carlisle highlights how teams need to adjust to playing on Concacaf. The Athletic’s Paul Tenorio has the upside of a late winner. The Guardian’s Paul MacInnes updates the situation with a potential independent regulator for British soccer.

Austin FC is struggling on the field in its first season in Major League Soccer, but that’s the expectation even in the era of fast starts.