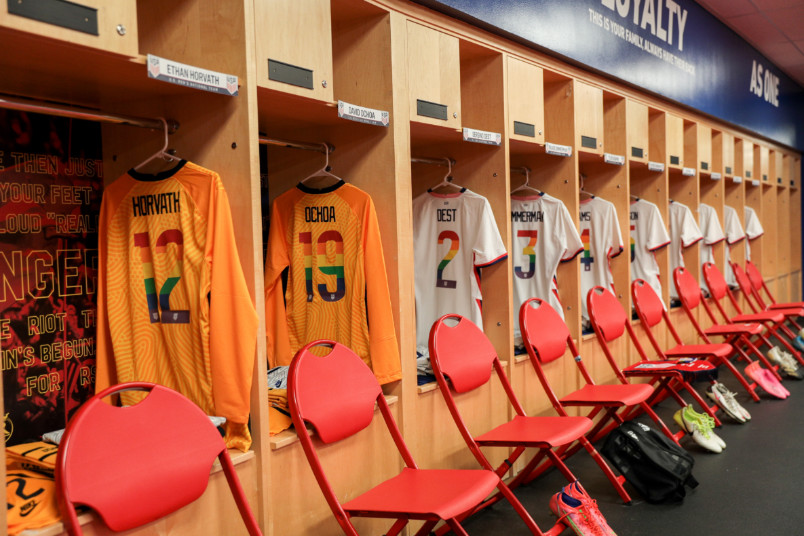 By Charles Boehm – WASHINGTON, DC (Jun 11, 2021) US Soccer Players – Before Sunday’s Concacaf Nations League final, the last time the USMNT played Mexico was in September of 2019. That was a high-profile friendly at MetLife Stadium in New Jersey. Back then, coach Gregg Berhalter insisted on building play out of the back despite El Tri’s fierce high press. The result was a 3-0 Mexico win keyed by the mistakes they forced. It came just a few weeks after the two sides played out a tight, balanced Gold Cup final that Mexico won 1-0.

“You guys are going to think I’m crazy,” Berhalter said postgame. “I’m happier about this game than the Gold Cup final because in the Gold Cup final I felt like all we did was play the ball long and that was our only solution. And now at least we tried to play the way we are envisioning.”

On the one hand, this type of commitment to a more refined philosophy has been a stated priority of US Soccer for a decade, fueled by the perceived limitations of the “traditional” USMNT style. On the other, that occasion fueled fears that Berhalter was an ideologue, that he would stick to his possession-oriented principles even when they courted danger for the USMNT.

Some 21 months later, the picture looks more complex. In four matches across the May-June international window, the USMNT utilized multiple formations and tactical permutations. At times they bossed the rhythm and hogged the ball, particularly in Wednesday’s friendly win over Costa Rica. In other moments, circumstances pushed them to dial back and ride out pressure, most notably in Mexico’s periods of control on Sunday.

“Obviously I’m not the coach but from a personal perspective, having a variety of different formations that we can play and different ways of playing tactically is going to be super-important for us in the long run,” said midfielder Tyler Adams on Tuesday, ahead of his welcome return to the starting lineup in Utah.

“As you saw in the game against Mexico, it was obviously a lot different than the game against Honduras. So we’re going to have to change how we play depending on the opponent, of course,” he added, noting how his RB Leipzig squad constantly shifted shapes under in-vogue manager Julian Nagelsmann.

Game states clearly have a big effect on how a team looks and moves tactically. Like all but the very best sides, the USMNT can’t always dictate the terms of engagement. They’d like to be able to get their feet on the ball and keep it when needed. Sometimes they might not want to. Some observers saw the formation and personnel changes against Mexico as more of the same old defend-and-counter. Others were relieved to see Berhalter opt for pragmatism given what happened two Septembers ago.

“It was complicated,” said the coach of his “adaptive shape” for Sunday, on paper a 3-4-3, interspersed with shifts into more conventional mid-block banks of four depending on how their rivals built play. It was an intricate set of assignments for the purpose of blunting an opponent’s area of strength. In the latter stages the USMNT returned to a 4-3-3, their recent norm, and looked more effective in it than they had against Honduras.

In one sense, the eventual 3-2 trophy-winning victory is the end that justifies the means. Yet, the changes at the outset also seemed to impose some extra layers of thought and coordination on the players. That can backfire and may not always be an option in the heavy travel and compressed timelines of qualifiers, which is the setting that looms so large at the moment.

“That energy, the fans, the referees, the calls, the decisions that don’t always go your way, this is exactly what it will be like when we go through qualifying in tough environments,” said Adams. “For a young group to go out there and not worry too much about playing pretty football or scoring the beautiful goals, just going out there, digging in, relying on the guy next to you to get it done, that shows what we’re about, that shows what the US has always been about. And that’s what it’s going to require in order to qualify for the World Cup.”

As he observed, spirit and identity influence tactics. Evolving new attributes without losing the resilience of old remains a top priority.

“Our identity has obviously changed over the past couple of years, and Gregg is trying to incorporate a lot of on-the-ball and tactical variety to the team,” said the New York Red Bulls academy product. “But I think that our identity is always going to be that American pride, that grit – going into tackles, winning tackles and sometimes doing things the hard way.”

While not a constant, pressing has become a much more commonly-used tool than in Berhalter’s first year in charge. The tactic has moved into the mainstream both at home and abroad since the many discussions about “proactivity” during the Jurgen Klinsmann era. It seems to dovetail with the youth and dynamism of both the current player pool and some of the most common characteristics of US players in general. It won’t always be practical in the hugely varied conditions awaiting them in the Concacaf qualifying journey that this camp was designed to simulate.

“It might be harder to press every single game because you’re playing three games [per window], and maybe you have to rotate,” said Brenden Aaronson on Wednesday. “But for us, it’s learning how to play different styles. Maybe sometimes if we’re in Mexico, dropping back a little bit and waiting. And then when we’re at home, it’s full press, go after them, get goals, do that kind of thing. So I really enjoy the way we play.”

If Berhalter really wants to dial up the tempo to Red Bull-type speeds, he has some levers to pull. Certain players like Adams, Aaronson, and Daryl Dike bring knowledge of the concepts involved. That includes the energy, intensity, and dueling nous to execute them.

COVID-19’s compacting of this cycle’s schedule means that eight of the USMNT’s 14 matches in the new Octagonal round fall in October, November, and January. Those are typically cooler months in large swaths of North America. Another three are set for the shoulder season of March. Like all federations, US Soccer is surely considering climate and altitude in its evaluations of potential home venues. The technical staff may prefer cooler locales to allow for a faster pace of play.

With the Gold Cup next and the start of qualifying soon after in September, Berhalter can focus on results for the foreseeable future. He sounds content about the depth of his squad. Soon, he’ll have to rely on it heavily.

“What I realized is that it’s going to take a group to get this done. It’s not going to take 11 starters. we need the whole group,” said Berhalter on Wednesday. “The coaching staff is confident with a number of different players, and the players are more comfortable with what’s expected and what it’s going to be like to go there. On an individual level, I think there’s guys that will be able to go three games and 90 minutes, but it’s not going to be many, especially given the way we want to play and the way we want to press.”