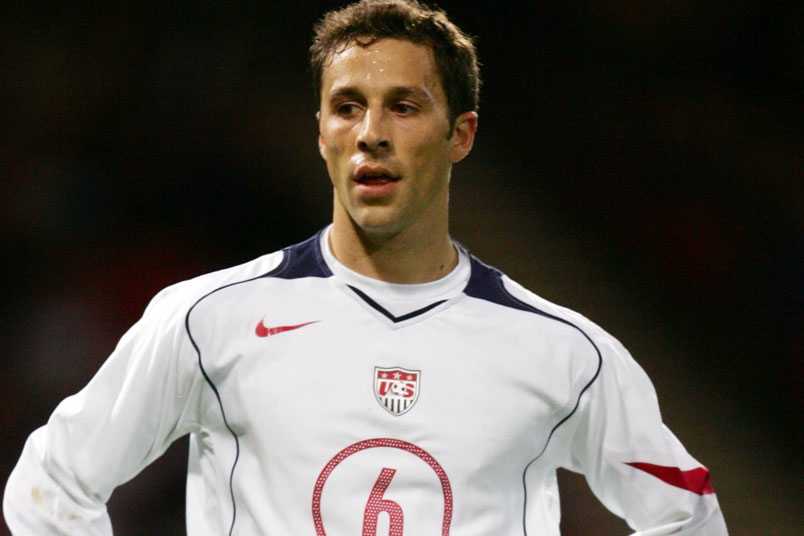 By Jason Davis – WASHINGTON, DC (Jun 11, 2021) US Soccer Players – The first word that comes to mind with the 2021 class for the National Soccer Hall of Fame is “finally.” For a pair of the figures announced as inductees on Wednesday, there’s no other word that better captures the feeling. The wait has been long, but finally, their time has come. The list read: Christie Pearce Rampone, Steve Cherundolo, Jaime Moreno, and Kevin Payne.

Both Cherundolo and Moreno received the support of vast swaths of American soccer during their wait to join the Hall in recent years. The two had very different backgrounds and Hall of Fame resumes, but each was undeniably important to American soccer.

Pearce Rampone, a player who collected an astonishing 311 caps for the USWNT, is an uncontroversial choice who enters the Hall of Fame in her first year of eligibility. Payne joined from the Builder Ballot on the back of his work building DC United into a powerhouse of Major League Soccer during the league’s early years.

Cherundolo was the prototypical underappreciated American player during a career that lasted 15 years for club and country. Because he played an unglamorous position at a time when fullbacks weren’t nearly the attacking dynamos they are now and spent his entire club career at a single German club, his contributions to the sport in the United States were easy to forget.

As the USMNT reboots and head coach Gregg Berhalter works to determine the best eleven players to take on the challenge of qualifying for the World Cup, it’s worth pointing out that Cherundolo made the right back position one of strength and consistency during his run. First, under Bruce Arena and then under Bob Bradley, Cherundolo was a stalwart of the team. His defensive work enabled more aggressive attacking play from his teammates, even while the man affectionately nicknamed “Dolo” occasionally involved himself in the attack.

Back in 2013, Cherundolo was part of the USMNT’s all-time Best XI at right back, a recognition he would still merit today. Future generations of American players may threaten his status, but Cherundolo will always be an American great. The best way to honor him for his achievements, especially in a fast-evolving soccer landscape where even players from a generation ago are easily overshadowed, is to enshrine him in the Hall.

Moreno, too, was put through the wringer by the Hall of Fame process. The Bolivian forward made his name as a star with the original MLS dynasty, Bruce Arena’s DC United. Back when MLS was essentially counterculture on the scene of American sports, Moreno helped bring credibility to the competition.

With his goalscoring and longevity, Moreno would have been an easy hall of fame choice in almost any other sport. The fact that he was a pioneer of a new league at a time when MLS was desperate for attention only makes his contributions to DC United more important. It’s fair to say that Moreno, alongside Marco Etcheverry, Raul Diaz Arce, Eddie Pope, and others, helped the league’s first champions recruit a generation of young fans in an important market for MLS.

Even if that wasn’t true, American soccer should do a better job recognizing its history beyond the international version of the game. Moreno’s election indicates there may be a thaw in the attitude towards MLS’s early stars, many of whom deserve the recognition but have yet to gain entry to the Hall.

Moreno’s introduction might be a start. He beat out fellow DC United legend Marco Etcheverry via tie-breaker to take the Veterans Ballot spot this year.

The absence of international players who made their names in MLS’s first two decades stood out because of the original NASL’s presence. Pele, Giorgio Chinaglia, Vladislav Bogicevic, Franz Beckenbauer, and Carlos Alberto, all of whom played for the New York Cosmos during the club’s heyday in the late 70s, gained induction between the early 90s (Pele, 1993) through to the early 2000s (Carlos Alberto, 2003). Criticism of the Hall’s previous voting process centered around a few key issues, but they largely boiled down to one problem. The bar for entry was too high when paired with the unwieldy election process.

In 2020 just one player gained entry, Carlos Bocanegra. In 2019 the only player inducted was USWNT legend Abby Wambach. The 2018 class had a whopping three players, Brad Friedel, Tiffeny Milbrett, and Cindy Parlow-Cone, but 2017’s lone inductee was goalkeeper Brianna Scurry.

Before the voting revamp, the trend was towards one or two inductees across the three different categories. A Hall of Fame is meant to be exclusive, but the National Soccer Hall of Fame was in danger of not letting enough people in. Like many other organizations in the business of enshrining the best players of a sport or league, the Hall dealt with “gatekeeping” by voters who refused to select deserving stars in their first year of eligibility.

Though it had less of an impact on the players elected, many voters simply didn’t return their ballots. Flagging participation spoke to a bloated voter base, one that included disinterested parties. The cleanup of those roles and the tightening of the voter pool were necessary steps towards fixing the Hall. Full disclosure, I was one of those removed from the voter rolls.

So far, so good, with the new voting procedures with a few caveats. Pertinent debates about what should or should not disqualify candidates are ongoing, though the consensus is that playing achievements will win out over most other concerns. The Hall has also made changes that would allow an extra player to gain induction if a Veteran or Builder Ballot candidate does not reach the level necessary to qualify. Allowing for some flexibility in the election process and ensuring that classes will be bigger in years past will reinvigorate discussion about the Hall.

Next year, the Hall will allow a third player and a second veteran election if a candidate appears on 75 percent of ballots. If that rule were in place this year, Hope Solo would be joining Cherundolo and Pearce Rampone as Player Ballot inductees.

The National Soccer Hall of Fame, as indicated by its name, should reflect the full breadth of American soccer history. That history is messy, complicated, and comes with few bright lines between the backgrounds of the people who have made and remade the sport in this country. In that way, the class of 2021 is a massive step in the right direction.