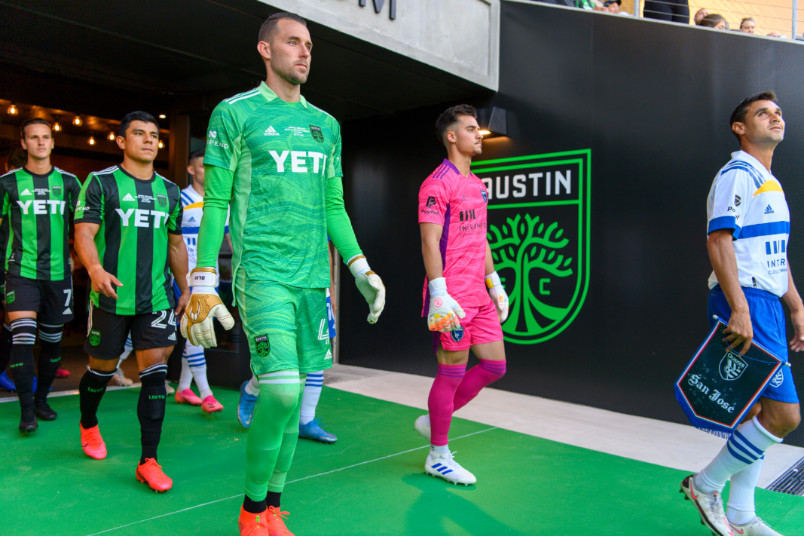 By Jason Davis – WASHINGTON, DC (Jun 23, 2021) US Soccer Players – MLS returned over the weekend after a reasonably short hiatus for the FIFA international window. The league put on a full round of games that did not disappoint for storyline-making results. Some of those results were secondary to the mere event of the game.

That was the situation for Austin FC, playing their first home game at Q2 Stadium after starting the season on the road. Austin played 90 minutes against the San Jose Earthquakes without a goal and failed to win, but the vibes in the building carried the day. That included minority investor/operator turned minister of culture, Matthew McConaughey, helping out with the drumming and adding to the ambiance. In a country where soccer culture is always a work-in-progress, it was an American soccer moment.

The draw for Austin represented a bit of an improvement over recent results. After starting the season with six points on the road from three games, Josh Wolff’s team has learned what so many first-year expansion teams do: Nothing comes easy. Austin’s potential is obvious, but as teams learn more about how they play and the wear-and-tear of a long road trip affected the team, the results turned. Now they wait on the series of firsts that come with a new stadium.

MLS returning to play was also a return to the status quo when it comes to the top teams in the two conferences. Before the break, there was no question that the Seattle Sounders were the class of MLS. After collecting 18 points in eight games, the Sounders led the Western Conference.

On Sunday, Seattle took three points at the LA Galaxy in a 2-0 result. The Galaxy’s start to the season showed promise and improvement under new head coach Greg Vanney. Losing at home to Seattle served as a stark reminder that there’s a gap because the league’s best and the new-look Galaxy.

Seattle charged in front this season despite missing key attacking figures Jordan Morris and Nicolas Lodeiro. The club planned for Morris to be absent via a loan to Swansea City until the end of the English Championship season. The plan wasn’t an extended period of time without both players.

With Morris now out for the year and Lodeiro’s return still unclear, the Sounders have figured out how to win without them. When Lodeiro gets back into the lineup, the rich will get richer.

Although the status quo in the West held on the return to play thanks to Seattle’s win over the Galaxy, it’s worth pointing out that the Supporters’ Shield standings leaders entered the break with a pair of draws. For some clubs, that wouldn’t ring any alarm bells. For the Sounders, it was enough to create a smidge of consternation.

In the East, Bruce Arena’s New England Revolution held the top spot when play paused and bounded into the season’s second stanza with a 3-2 win over NYCFC. This is the Revs meeting expectations. Following last year’s conference final appearance, New England looked like a serious contender to reach a final in 2021.

The key for New England is contributions from across the attack paired with an experienced, competent defense. The defense had trouble with the NYCFC attack at Red Bull Arena, but a resolute presence in goal kept the Revs in line for a victory.

Matt Turner’s in-goal heroics for New England reminded anyone that might have forgotten that the 26-year old is an elite talent in this league. Teams don’t win championships on the strength of goalkeeping alone, but they can level up from good to great with a top-notch backstop in the lineup.

Turner makes the Revolution better. That’s worth underlining for a team that has a potential MVP candidate in Carles Gil pulling the strings. As a few of the other presumed contenders in the East have stumbled, the Revs have thrived.

MLS isn’t messing around with the schedule. A full round of midweek games will ramp up the action. Four teams now have the magic 2-points-per-game return that separates good teams from very good: The Sounders, the Revolution, Orlando and… the Colorado Rapids.

A few keen MLS observers saw something in Colorado’s finish to the 2020 season that forecasted good things for 2021. The Rapids 2020 season was the most difficult of any club in the league due to the effects of the COVID-19 pandemic. They lost a whole month of play and finished the campaign with only 18 games played.

The Rapids exited in the first round of the playoffs to a red-hot Minnesota United side, but still showed the type of promise that spelled good things for 2021. There’s young talent in Colorado, with both Sam Vines and Cole Bassett getting attention from the USMNT program.

Colorado returned to play with a 2-0 win over woeful Cincinnati on Saturday. It’s not the kind of victory that will solidify the Rapids as a force to be reckoned with in the West, but good teams should beat struggling teams. The restart of play, with tougher tests to come, makes Colorado a team to watch. That’s a new wrinkle.

Whether Daryl Dike’s return to MLS can be called a “new wrinkle” is debatable, but there’s no arguing the 21-year-old’s talent. In his first start since returning from his loan in England with Barnsley FC, Dike scored twice in a 5-0 Orlando City romp against the San Jose Earthquakes.

The Lions sit second in the East and pulled into the 2-points-per-game club with the blowout win. Orlando got to that level without Dike or his planned stand-in, Alexandre Pato. Now that the USMNT striker Dike is back, the tension will rise over questions around his future. Will Orlando sell him?

It’s still early in the 2021 MLS season. There’s plenty left to sort out. LAFC is still sputtering. It’s worth asking if they’ll ever kick into gear this season. The defending champs are coming on in a big way and could challenge New England for dominance in the East. So could Philadelphia, a team that got back to work with a comeback draw in Atlanta.

For now, the status quo holds. In MLS, the only question worth asking is, for how long?