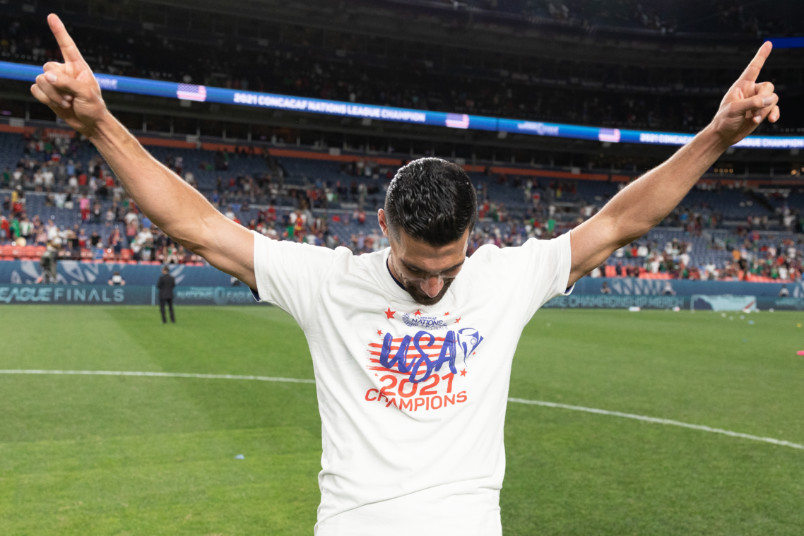 By Jason Davis – WASHINGTON, DC (Jun 9, 2021) US Soccer Players – On Sunday night in Denver, the USMNT showed proof that things have changed. Against a motivated Mexico, they won a regional rivalry and a trophy. They did it with a new look squad showing that head coach Gregg Berhalter’s tactics can work under pressure.

Berhalter’s group is as close to a “new team” as any continuously operating national team could be. Of the players called in for the Nations League finals in Denver, only four (Kellyn Acosta, DeAndre Yedlin, Tim Ream, and Christian Pulisic) were on the roster at the end of the last World Cup qualifying cycle. Defender John Brooks would have likely been in Bruce Arena’s lineup that day, but the center back was out of action due to injury. That’s not much carryover to the best group available to Berhalter less than four years later.

Even before considering the wave of young talent arriving at the senior level, the turn to a new group makes some sense. Whatever value there is in experience and institutional memory, the inglorious end to the last qualifying campaign demands a fresh start.

This new wave of talent arriving just in time certainly helps. Never before has the United States included so many teenagers in its best roster. Never before has the United States counted so many players under the age of 25 among its most important figures. The lineup fielded by Berthalter against Mexico was the youngest USMNT lineup to play in a final, coming in just a shade under the average age of the lineup for the 2019 Gold Cup final.

Berhalter’s 2019 team represented the beginning of a journey to 2021 and beyond, with the caveat that no one then knew that 2020 would be a lost year for everyone involved. Back in 2019, Berhalter’s team wasn’t the best he could deploy. Instead, it was the best team among a new generation of players. There was no guarantee then that the group would coalesce.

Finishing second to Mexico, the 2019 team had the seeds of the squad we saw lift a trophy on Sunday, minus a few key pieces. Two years later and with 2020 contributing almost nothing to the on-field progress of the team, the scene shifts. There’s even more youth now.

No one, least of all Berhalter himself, would claim that Sunday’s win was a perfect performance. The game prompted questions about player selection and tactics debated in all the usual places. The margin was narrow and required heroic efforts from several players, including a backup goalkeeper.

Still, the building blocks of a successful team are in place. The type that will not only return the USMNT to the World Cup, but achieve something of note once it gets there. The system and the exact combination of players may morph and change over the next 17 months, but the core group that won on Sunday will lead the charge into 2022.

Nothing speaks to the camaraderie growing in the ranks more than the shared leadership we’re seeing on the field. Christian Pulisic wore the captain’s armband in the Nations League final, but the sense of shared responsibility in the team was on full display.

The world is awash in reboots. Hollywood’s go-to move in the 21st century is to take a franchise that was once popular in a previous era and repackage it for both its original audience and a new batch of consumers. Not every reboot works, but the trend continues because so many do.

Sunday was a reboot of not just the USMNT but of its rivalry with Mexico. The first competitive match between the two nations since El Tri’s 1-0 win at that 2019 Gold Cup final delivered. It wasn’t just the USMNT winning, but the type of tense struggle deserving of its history.

It’s tough to call it a rivalry when one side dominates. The reaction from USMNT alums showed how much it means for American soccer to beat Mexico in a meaningful match. From Landon Donovan to Tab Ramos, previous generations of USMNT players took to social media to yell about the win. Beating Mexico in Denver, by hook or by crook and in proper dramatic fashion, brought the culture back to life.

It’s worth remembering that the gap in American success on the international stage was long enough that the youngest generation of fans might not recall better days. Because soccer is always growing in American, plenty of people had never before experienced a match like that. Capturing hearts and minds is a lot easy when there’s success.

The rivalry, too, got a reboot. The Mexico response to losing in Denver feels like old times. Intense criticism of the coach, complaints about the refereeing, declarations that El Tri “deserved” to win. Losing to the USMNT has to be intolerable. It’s how the rivalry keeps its edge.

Driving that right now is the talent level of this new look USMNT. The club affiliations tell the story along with trophies won in Europe. That wave of talent may change the dynamic of USA vs Mexico in the years to come. For the moment, as that talent works to understand how to best play together, the lessons learned in a gritty win over its fiercest rival will serve it well.

Some people might be over reboots. It seems like there are never any original ideas anymore. This reboot, however? A reboot of the USMNT with a talented, confident, and bonded group of young players ready to take on the world after taking down big, bad, Mexico? This reboot is something else.

Austin FC is struggling on the field in its first season in Major League Soccer, but that’s the expectation even in the era of fast starts.