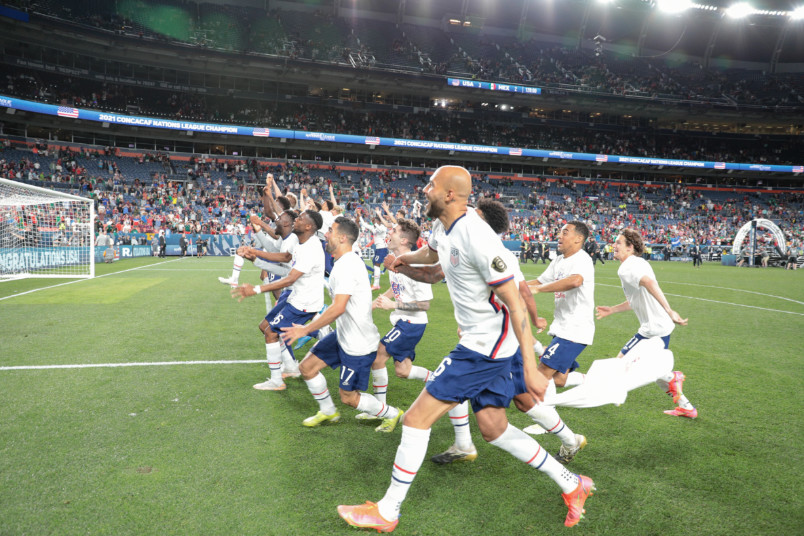 Monday’s soccer news starts with the USMNT making a major statement in Concacaf by winning the Nations League. It wasn’t easy for the USMNT, needing two comebacks and an injury requiring a goalkeeping change but the result was making history as the first Nations League winners. As Charlie Davies said on the CBS Sports Network coverage, “this is a start.” With that in mind, here are three takeaways from USMNT 3 – Mexico 2 aet.

Spacing was not the issue

The USMNT fell behind early to a cliche of contemporary soccer in the high press era, attempting to pass out of the back. For the United States, what mattered was the response. The backline continued to play its game, working on doing what they planned against a Mexico team trying to maximize what they believed was a tactical advantage.

Evidence for the USMNT defense coming together was that they were no longer the focus. The USMNT attacking players took control, turning it into the kind of back-and-forth game that helped push the quality higher. If a curious sports fan decided to spend Sunday night in the company of Concacaf, they saw an engaging game. It’s Concacaf, so they also saw some interesting refereeing and the good and bad of instant replay.

MLS fans understand the tactical nuance of Tata Martino and there’s no doubting his skill in putting together a game plan. That was on display for the Nations League final with Martino keeping his lineup to himself into the last minute. What he wanted was clear. A confident high press that would push the USMNT into making mistakes. It worked until it didn’t, with Tata making a late exit to a red card for putting his arm around the referee during a VAR review. Strange things in a strange thing in a strange game.

Gregg Berhalter’s now acclaimed notebook may not have had much for giving up an early goal to a backpass. It probably also didn’t help when the only difference between going 2-0 down was VAR. Berhalter made tactical and personnel changes that made the USMNT better. He gave his group the chance to show that they will stick together for each other. The response to Zack Steffen’s off the ball injury demonstrated that as the USMNT regrouped and scored. When the game got looser, the USMNT kept enough shape for Ethan Horvath to be the difference.

Christian Pulisic said in his postgame comments that he knew he was going to try to hit the upper 90 with his penalty that turned out to be the winner. He also said he had full confidence in Horvath to save Mexico’s penalty. That’s enough of an indication that this is a team expecting their chances to fall. It’s the kind of confidence built at club level now showing itself with the national team.

Mexico expected a more familiar version of the USMNT after seeing them against Honduras. That USMNT didn’t show up in the final. Instead, it was a United States that would play from behind and work to shut down mistakes. Weston McKennie was a major difference, leading the line on occasion with the kind of confidence that can change a game. That push made sure that whatever opportunities Mexico created weren’t going to be enough.

The Philadelphia Inquirer’s Jonathan Tannenwald with the bigger picture from a successful Nations League for the USMNT. SI’s Brian Straus points to the Nations League as a statement of purpose for Gregg Berhalter’s squad. ESPN’s Jeff Carlisle starts the countdown to qualifying. The Athletic’s Paul Tenorio on the game’s energy. Goal’s Dan Bernstein relays Berhalter’s postgame comments over objects thrown at players. Josimar’s Philippe Auclair reports on the situation with CAF after a staff turnover last month.