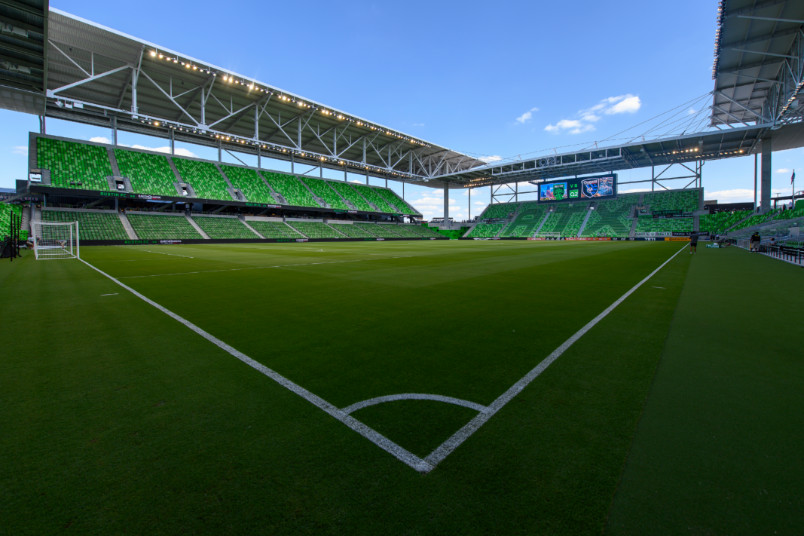 Friday’s soccer news starts with Austin FC’s 4-1 home win over Portland. Jon Gallagher scored the first home goal at Q2 Stadium in the 28th minute with Diego Fagundez doubling the lead in the 33rd. Jeremy Ebobisse pulled a goal back for Portland seven minutes into a lengthy first-half stoppage time. Alexander Ring made it 3-1 Austin int he 77th with Hector Jimenez finishing off the goals in the 81st. With Austin not scoring in their opening two games at Q2 Stadium, the offense and the win were history-making for the expansion club.

“I think it’s extremely significant,” Austin coach Josh Wolff said. “We went in the locker room after the game and that’s what I said. They brought us all here. They built this unbelievable stadium. Delivered us to this fantastic community and we’re fortunate enough to get goals and cap for a win. But the fans, everything’s been right. Tonight, we got the goal, to break that seal and to cap it off for our first win in Q2 [Stadium]. It’s a momentous occasion, and we’re very fortunate to be doing what we do. Moments like this to be a first-year team, to get your first goal, your first win, you know it will be memorable. Certainly, will be very memorable for me and I hope all these players and fans remember it as memorable of an experience.”

While it’s easy enough to look at the schedules MLS teams are playing in a summer of international breaks, it’s also completely fair to see this as a potential turning point for Austin. Those three points pushed them up from 12th to 9th in the Western Conference, tied on points with the 7th and 8th-place teams. The unbalanced schedule has Austin on 12 games played to nine for 8th-place Real Salt Lake and 11 for 7th-place Portland. That’s the less flattering portrayal, with the schedule eventually shaking out and likely putting space between clubs.

Austin plays LAFC at home next Wednesday before the international break. Then it’s Seattle at home on July 22. One of those is a winnable game for this club right now. That’s an important step to take, showing that nothing is ceded in an expansion season. With a backloaded home schedule, Austin has an opportunity here. A lopsided win over Portland shows the potential to take advantage.

Moving to Concacaf, the confederation announced a sponsorship deal with Qatar Airways which is now the official airline of the 2021 Gold Cup. “We are extremely pleased to welcome Qatar Airways as a confederation-wide partner of Concacaf,” confederation president Victor Montagliani said in the press statement announcing the deal. “Their extensive experience across global football and sport sponsorship will undoubtedly benefit our confederation. We look forward to working together to elevate this summer’s Gold Cup, the next edition of the Concacaf Nations League and football across the entire region.”