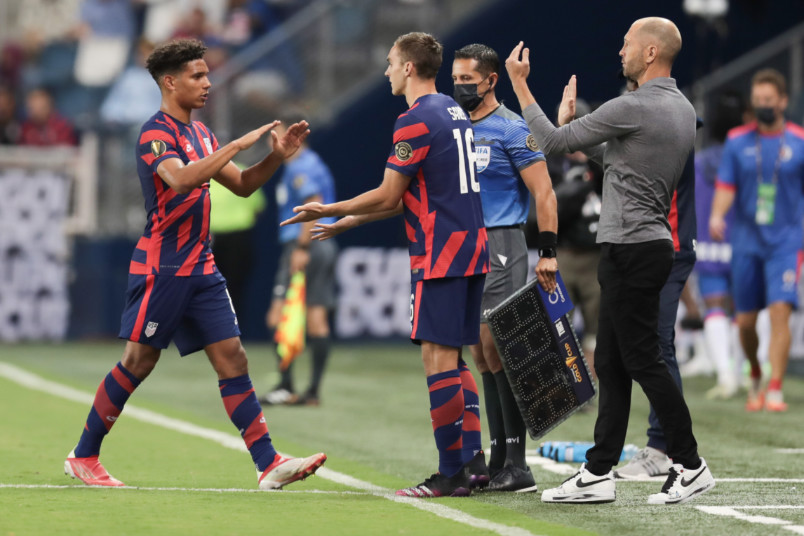 By Clemente Lisi – NEW YORK, NY (Jul 12, 2021) US Soccer Players – There are some who are quick to point out that the Gold Cup schedule almost guarantees that some participants won’t have their first choice rosters available. Typically held in mid-summer, the USMNT and Mexico, teams that have many European-based players, often leave their best players out. Instead, they tend to field domestic-heavy squads so the Euro-based regulars can rest and join their clubs for preseason training.

None of this is new for the Gold Cup, especially when it clashes with the Euros and Copa America. Sometimes it has happened because Mexico would be an invited team at the Copa America and something had to give when it came to roster decisions. Concacaf chose to delay this year’s edition of the Gold Cup to not compete with the rescheduled Euros and Copa. On the plus side, this creates an opportunity for coaches to test new players and expand the player pool. That is especially important since World Cup Qualifying is less than two months away.

In order to reach Qatar 2022, teams need to navigate playing away games with hostile fans and dealing with injuries that players suffer along the way. This is where the expanded player pool, often discovered and nurtured at the Gold Cup, comes in handy.

With that firmly in mind, the USMNT roster features 19 MLS-based players. That includes Colorado Rapids defender Sam Vines, who scored the winning goal in the US’s 1-0 win against Haiti on Sunday night to open up their Gold Cup campaign. The ability to test players in a tournament that matters will give them all experience that is essential when facing Concacaf opposition later on. Every National Team outing can be an audition for a spot on coach Gregg Berhalter’s next roster.

“Any time you have two major events in your region, you want to be working with a group of players that you can build towards something,” Berhalter said before the Gold Cup began. “When we look at it in a positive way, I talked about being able to affect a larger player pool, being able to have really good information on a broader pool based on the congestion of World Cup Qualifying.”

Berhalter knows what it takes to succeed at the club level, where players have months and months to build chemistry. Coaching a National Team is very different. Building chemistry is essential but a challenge when the personnel at your disposal is constantly changing. This Gold Cup is no different, meaning that getting it right early and within a pre-determined playing system is what matters most.

A deeper talent pool across the region benefits everyone. Canada, who reached the final round of World Cup Qualifying, has an exciting blend of youth and experience at this Gold Cup. Thirteen players hail from MLS, but there are several notable European-based stars. That originally included Bayern Munich’s Alphonso Davies before a training injury.

Canada coach John Herdman’s team doesn’t look like much of a secondary squad given that 12 of his players have Gold Cup experience. What they lack is competitive matches against Concacaf heavyweights such as the United States, Mexico, Costa Rica and Honduras. They will get just that when they face the United States in the final game of Group A on July 18 at Children’s Mercy Park in Kansas City.

“The Concacaf Gold Cup allows Canada to keep building on the momentum from the last six matches in FIFA World Cup Qualifiers,” Herdman told the Canada Soccer website. “We’ve missed the opportunity to play some of these big matches that come at a Concacaf Gold Cup, so every match counts to create that spirit and cohesion required to take this country to the next level. We need this dynamic group of players to keep growing and learning together and the Concacaf Gold Cup provides great experience to prepare us for FIFA World Cup Qualifiers.”

Success at the last few Gold Cups and the ability to test players has helped Canada. In 2019, Canada reached the Gold Cup quarterfinals, the first in a decade that they had reached the knockout round in back-to-back editions of the tournament. This summer, Canada will also face Haiti in the group stage on July 15 in Kansas City, a rematch of last month’s second-round matchup of World Cup Qualifying.

Mexico, meanwhile, brought 13 Liga MX players to the Gold Cup. Coach Gerardo Martino wasn’t shy about adding some European-based stars he thinks will make the difference, such as Atletico Madrid midfielder Hector Herrera and Napoli striker Hirving Lozano, who exited with an early injury on Saturday against Trinidad and Tobago. Martino is also conducting experiments. He called up the Argentine-born Rogelio Funes Mori, who grew up in Texas and now plays for Monterrey, hoping to give the striker tournament experience after already featuring and scoring for El Tri in a friendly against Nigeria at the Memorial Coliseum in Los Angeles.

“Recovering feeling for the game and scoring goals gives us a greater margin of tranquility,” Martino told reporters after the July 3 game. “This was a friendly match. It has been a good test and a good way to introduce us as to what is to come.”

Martino’s team has so much depth that even the portion that resembles a secondary team will remain competitive. That makes Mexico favorites to repeat, but they face plenty of competition from the United States, as seen in the recent Concacaf Nations League Finals, and potentially even from a surging Canada.

The tournament’s opening weekend was just a glimpse of what’s to come. There’s still plenty to play for. Expect some surprises over the next few weeks. Also, expect some players to shine as they hope to grab a regular roster spot in the months to come.