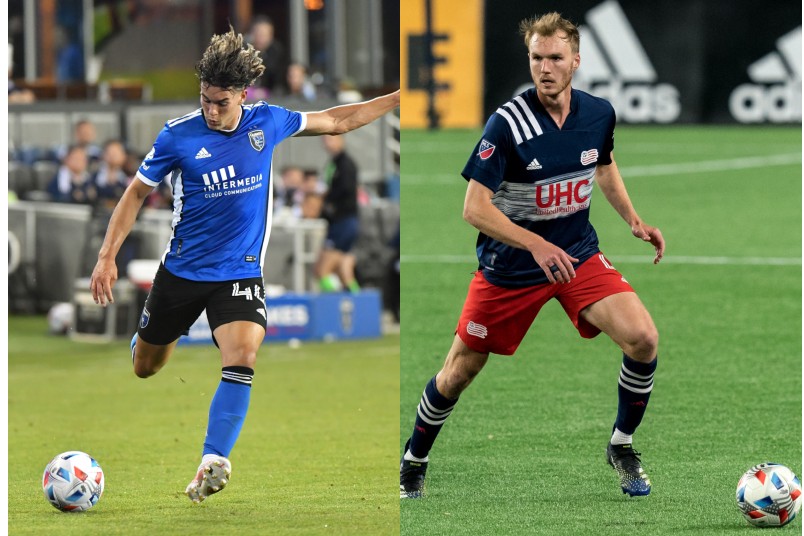 By Jason Davis – WASHINGTON, DC (Jul 23, 2021) US Soccer Players – For the USMNT, this Gold Cup is about the opportunity. It’s about the opportunity to win a trophy, of course, but also the opportunity presented to individual players. There’s an intense World Cup qualifying campaign coming very soon. USMNT coach Gregg Berhalter is on the hunt for players who can step up when asked to aid in that effort.

Already a few names have distinguished themselves during the group stage. Fans and analysts alike are fawning over the talent of NYCFC defender/midfielder James Sands, a player deputized by Berhalter to help make a formation shift work for the team when injuries and lack of wide players forced his hand.

Right back Shaq Moore, a player who took a unique path to a professional career by leaving Georgia for Spain, is getting his fair share of attention as well. Moore’s performance could further bolster a position of strength for the USMNT going into the fall.

Opportunity came for Sands and Moore. It now comes for two new additions to the US camp as the proceedings turn from the group stage to the higher stakes of the knockout rounds. Following Concacaf’s decision to allow teams to replace injured and ill players going into the quarterfinal round this weekend, USMNT head coach Gregg Berhalter called up New England Revolution defender Henry Kessler and San Jose Earthquakes forward Cade Cowell.

It’s important to note that the USMNT hasn’t yet officially requested that Kessler and Cowell be added to the roster. They have until 24 hours before the quarterfinal match to do so. It’s possible, but unlikely that their arrival in camp doesn’t lead to anything beyond some training time with the national team.

Berhalter’s move stems from a couple of problems his team faces as it prepares to face Jamaica on Sunday. Walker Zimmerman departing the team after suffering an injury in the group stage finale against Canada makes it more difficult to run the three-center back system the USMNT boss has utilized to make up for the lack of wide attacking players on his roster. Kessler could help make the three-back system work, or he could be some extra cover for a four-back system if Berhalter returns to the 4-3-3 he has preferred in the past.

The 4-3-3 is where Cowell comes in. The San Jose Earthquakes homegrown star is a wide forward for his MLS team under head coach Matias Almeyda. Cowell’s familiarity with a high press might also be attractive to Berhalter as the knockout rounds arrive. Paul Arriola’s status for the remainder of the tournament is unclear after he left the group stage opener with a muscle injury, creating a need in the wide attacker area.

Cowell is just 17, a fact that would have been remarkable not that long ago. Teenagers rarely got a chance to even train with the national team in years past. Since then, the rise of a remarkable wave of young talent means Berhalter’s choice feels almost normal. Fans may debate calling in Cowell over some other options on the Gold Cup provisional roster, but few will argue the player doesn’t deserve a shot.

Kessler and Cowell arrive at the Gold Cup together, but their paths to this point have been very different. Revs defender Kessler is, like Cowell, a second-year professional. Unlike Cowell, Kessler is already into his 20s, having reached MLS after playing at the collegiate level.

Kessler spent three years at the University of Virginia where he was teammates with USMNT forward Daryl Dike. He joined the Revolution as the club’s top SuperDraft pick in January of 2020. In an era when the value of the draft is waning, expectations that Kessler could quickly adapt to the professional game were muted.

By the end of 2020, neither Bruce Arena nor the fan base in New England carried any doubts. Kessler not only garnered Rookie of the Year attention, he helped the Revs make a run to the Eastern Conference final. The first-year player’s comfort with the ball at his feet and smart positional defending made him a standout among his peers. He looks to have a bright future ahead for both club and country.

Kessler’s first taste of the USMNT came as part of the Under-23 roster called up by head coach Jason Kreis for the Olympic qualifying tournament. Following an introductory January camp, Kessler started three of the team’s four games in Mexico. That team didn’t reach the Olympics, but Kessler’s inclusion in the process pointed to a future chance at the senior level.

Cowell is part of the new breed of American soccer talent. Where Kessler’s path took him to college before he developed into a professional-caliber player, Cowell was tipped for greatness at an extremely young age. At 14, he was setting records for his local youth club in Pleasanton, California. By 15, he was on a homegrown deal with the Quakes, debuting for the club in the US Open Cup.

2020 represented Cowell’s breakout season. The COVID-19 pandemic stretched teams thin. Quakes coach Matias Almeyda turned to the teenager to help carry the attacking load. Used mostly as a late-game substitute, Cowell scored a goal and added an assist in 475 minutes of play. Most importantly, he showed a commitment and physical ability to stay with professional players, opening the door to much more responsibility this season.

The belief was well-placed. Through 13 appearances, 10 of them starts, Cowell has four goals and four assists in 2021. Not only is he holding up to the rigors of a more traditional MLS season, Cowell is among the best forwards in the league at setting up teammates, dribbling defenders, creating shots, and pressing the ball. Even at 17, Cowell has the physicality to compete with elite athletes ten years his senior.

Those sound like exactly the kind of traits Berhalter is looking for to boost his Gold Cup team. It remains to be seen if the USMNT coach gives his 17-year-old callup a chance to play and contribute, but the faith shown by Berhalter just to call him in at all speaks volumes about Cowell’s development.

Even if Kessler and Cowell don’t play in this edition of the Gold Cup, the time they’ll spend training in Berhalter’s team will serve as a stepping stone for future national team chances. Both are young, talented, and able to improve their games quickly enough to be Berhalter’s mind down the road into World Cup qualifying.

This Gold Cup is about opportunity. The team, and by extension, the entire program has the opportunity to underline its regional supremacy. But this Gold Cup for the USMNT is more about individual opportunity. Kessler and Cowell are just the latest to get theirs.