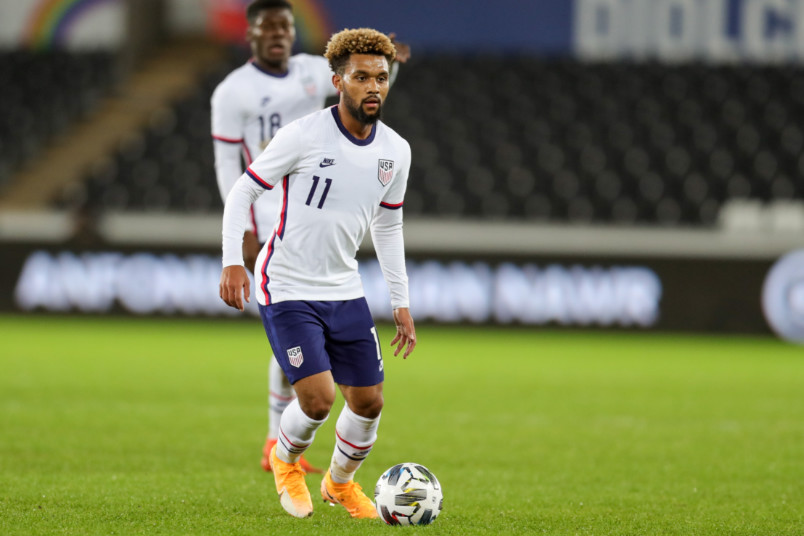 By Jason Davis – WASHINGTON, DC (Jul 2, 2021) US Soccer Players – Once upon a time, Konrad de la Fuente was a unicorn. While Americans had made inroads at clubs across Europe and in the biggest leagues on that continent through 25 years of trying, none had established himself with one of the world’s most famous clubs, FC Barcelona. Spain, for reasons unclear, proved largely impenetrable to talent with a US passport.

Even when American players did trickle across the Atlantic and get a chance to prove themselves in Spain, the road to first-team success proved to be bumpy. 12-year old Ben Lederman made history when he joined Barcelona’s youth academy, La Masia, back in 2011. Seven years later, Lederman left the vaunted soccer school without a first-team contract. He now plays in Poland’s topflight.

Before fellow USMNT player Sergino Dest arrived in Catalonia via a big-money transfer, de la Fuente was playing his way through the Barcelona system. He was the lone American presence in a club known for recruiting some of the best young talents from around the world. FIFA eventually sanctioned Barcelona for that recruitment policy, directly impacting Lederman. De la Fuente’s situation was different. Because his family relocated to Spain from South Florida when he was 10, De La Fuente didn’t need to worry about FIFA rules regarding the movement of underage players. Essentially, he was a local, on the same level as his Spanish peers in the system.

With Barcelona’s focus shifting from academy products to big-money transfers, name players stood in De La Fuente’s path from the reserves to the first team. On Wednesday, Olympic Marseille announced the purchase of De La Fuente’s contract from FC Barcelona. The American forward will move to France looking to establish himself as a first-team professional in a quality league.

To be clear, everything De La Fuente achieved at Barcelona was remarkable. Putting aside issues of semantics regarding how much of his effective soccer education can be credited to the United States or Spain, De La Fuente was an American on the doorstep of first team soccer at a world-famous club known for requiring elite technical ability in its players. That last hurdle simply proved to be too much, at least for the moment.

It’s important to say “for the moment” because Barcelona said goodbye to De La Fuente begrudgingly. Although first team playing time was at issue, making sense for the 19-year-old to move on, Barcelona did everything it could to ensure a possible return. Reports on the transfer indicate the Spanish giant attempted to insert a buy-back clause in the deal, only to be shot down because of French federation rules.

Even if Barcelona can’t have the first crack at de la Fuente in the future, it stands to reason that a good showing in Marseille will put the player back on Blaugrauna’s radar. De La Fuente is not only talented, he knows the club and its culture in incredibly valuable ways. Barcelona also holds the right to 50% of any fee a sale of De la Fuente generates for Marseille.

Moving to Marseille provides de la Fuente with an opportunity to play in one of Europe’s top leagues, as well as on the European club stage. The club’s 5th-place finish in Ligue 1 in 2020-21 earned Marseille a spot in the upcoming edition of the Europa League. As a stepping stone to potentially greater things in the future, a move to Olympique Marseille is a strong one for De la Fuente.

Marseille isn’t Barcelona, but it’s reputation and place in the table speaks to potential. De la Fuente will play under Argentine manager Jorge Sampaoli, a coach with a penchant for dramatics and playing an intense pressing style of soccer. Learning to play within that style will expand De la Fuente’s skill set and make him more attractive to bigger clubs who play similarly. It’s worth noting that Gregg Berhalter’s USMNT plays with a variation of the press.

USMNT fans can reasonably hope that De la Fuente follows a similar trajectory in France to that of national team forward Timothy Weah. After finding himself unable to break into the first team regularly with PSG, Weah traded Paris for Lille. After a series of injuries that limited his playing time there, Weah finally established himself as a contributor to a club that won the Ligue 1 title in 2020-21.

By moving to Marseille, De La Fuente doubles the number of Americans in the top flight of France to two. France has occasionally been the club home of USMNT players, though the history is better described as sparse and spotty.

Before Weah’s rise at PSG, the last American to play a significant number of games in France was midfielder Alejandro Bedoya. Bedoya spent three seasons playing for Nantes, appearing 87 times for Les Canaris in that stretch. For the same reasons that Bedoya is so beloved in his current home of Philadelphia, his two-way talent, his industry, and his leadership, Bedoya was a fan favorite in Nantes. It was during his run in France that Bedoya established himself as a USMNT regular, earning a place in the 2014 World Cup squad.

Before Bedoya, striker Charlie Davies played in Ligue 1 with FC Sochaux. Davies’s career in France was interrupted by the 2009 car accident that changed the trajectory of his career.

Carlos Bocanegra’s excellent European career made stops in France at Rennes and St Etienne following his time at Fulham. Bocanegra went to collect almost 100 appearances in the French topflight before moving on to Rangers in Scotland.

Outside of former USMNT fullback David Regis, a naturalized citizen who spent ten years playing professionally in France before suiting up for his adopted country, the remaining history of Americans in Ligue 1 is either brief or inconsequential.

France has seen more American soccer success than Spain, but much of it comes down to Weah’s place with the French champions. That’s a high bar for De la Fuente to clear. If there’s anything certain about the Florida-born, La Masia-bred attacker, it’s that he has the talent necessary to do just that.