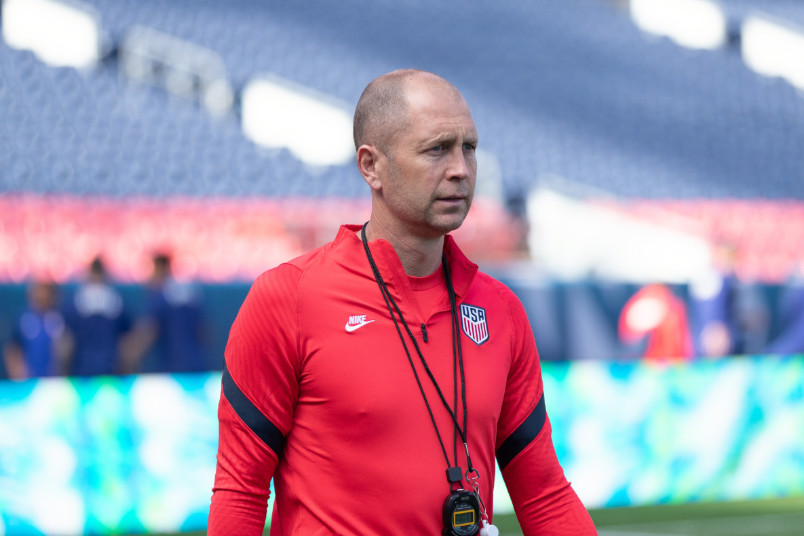 By Charles Boehm – WASHINGTON, DC (Jul 2, 2021) US Soccer Players – The USMNT still doesn’t know who they’ll be playing in their opening match on July 11. But the program’s hunt for a seventh Gold Cup championship is about to begin in earnest.

Gregg Berhalter released his final 23-player roster and explained his choices on Thursday. In a few days, squad and staff will convene in Kansas City, the team’s home for the entire group stage. They’ll kick off the tournament against either Barbados, Bermuda, Haiti, or Saint Vincent and the Grenadines, depending on the outcome of the new preliminary round before meeting Martinique and Canada in the group stage.

Here are a few key topics and conversation points before Concacaf’s biggest, in literal terms at least, piece of hardware goes up for grabs.

Every roster ever made has ins and outs that get people talking. In this case, Berhalter had a fairly encyclopedic set of explanations for the litany of names that came up in his media availability, whether they were on the list or not.

The discussion starts with the inescapable knock-on effects of the COVID-19 pandemic. Players are being asked to play as many or more games as usual in smaller and smaller time windows, often in punishing conditions and situations. That’s the reason for the absence of most of the players who won the Nations League last month.

Player fatigue was already an issue before the pandemic collapsed schedules. For some players, right now could well be the last extended break over the next 18 months. Others who might have wished for a Gold Cup adventure were asked to give their full attention to making the best possible impression during their club’s preseason.

“The major European players were going to get time off after Nations League to prepare for their season. Some other players that are in critical situations in Europe, we felt that it was more important for them to be in preseason with their team,” said Berhalter, citing Bryan Reynolds’ first days with Jose Mourinho at Roma as an example, “and give them a good chance of making a positive impact with their new coaching staff and with their club, rather than to be in Gold Cup.

“Guys like Zack Steffen and Christian Pulisic had 58 games in an eight-month period,” he later noted when asked whether any chance to gather his full group is worth taking. “So yeah, you have them together, but the mood is so bad or they’re so burnt out that they can’t compete at the level that you need them to compete, and then you go into qualifying with potentially bad feelings. So for us it’s about spinning it in a positive way.”

Can Berhalter nail this balancing act?

That first item leads to this second. Because of the insanely relentless schedules, just about every roster from now through the World Cup is a balancing act. Even when FIFA dates give them maximum bandwidth in selecting players, Berhalter and his staff will be weighing form, fitness, and chemistry in search of the best lineup at any given point. It can be very subjective, at least until the final whistle blows.

The USMNT program would like to add a second trophy to their haul this summer. That same Nations League achievement is also a factor in why Berhalter feels he can now shift gears and cultivate the wider player pool. Qualifying is everything, and a long list of contributors is expected to be required. So a long list of new or relatively new faces is bound for KC and will get a decent chance to impress.

“Any time you have two major events in your region, you want to be working with a group of players that you can build towards something,” he said. “When we look at it in a positive way, I talked about being able to affect a larger player pool, being able to have really good information on a broader pool based on the congestion of World Cup qualifying.”

What about the roster composition?

As such, Berhalter immediately acknowledged that this group has some thin spots in terms of his currently favored 4-3-3 system.

“When you look at the options at center back that we ended up choosing, Donovan Pines and James Sands have very little international experience,” he said. “We have two solid starters in Miles [Robinson] and Walker [Zimmerman], and behind that, it is pretty thin. And this is where we talk about using this tournament to develop a greater player pool to prepare for World Cup qualifying. If we can give guys like James Sands and Donovan Pines international experience as we move into qualifying, they’re potential options.”

The group is also short on wing options. As it turns out, the coaching staff plan to use front runners in those spots, perhaps a reflection of an attack-minded approach against smaller nation opponents.

“We have [Matthew] Hoppe and [Jonathan] Lewis slated at left winger and we have Paul Arriola and Nicholas Gioacchini slated for right winger,” stated Berhalter. “So two of them you can argue are center forwards. So that could be another position where we’re lacking in depth. But we think Matthew Hoppe with his movement, with his repeated sprints, will be able to execute the role that we’re talking about pretty well. But overall, we don’t want to look at this as an experimental team. We want to look at this as a team that can compete to win the Gold Cup, let’s be really clear with that.”

How will the midfield mesh?

If Berhalter was ready to address concerns about central defense and the flanks, he was equally keen to celebrate his options in the middle of the park. Kellyn Acosta, Sebastian Lletget, and Jackson Yueill have become familiar USMNT mainstays. Cristian Roldan is in similar territory and is spearheading MLS’s top team this year. Gianluca Busio and Eryk Williamson are two of the top center mids in that league, both adaptable and dynamic, and appear on course for significant opportunities in Europe.

The balance and skill of the midfield trio in this 4-3-3 is hugely influential on the team’s overall functionality. With most of the group able to work in both the lone #6 and twin #8 roles, Berhalter will have scope to mix and match, whether hunting a Gold Cup result or experimenting for the long run.

“There’s a lot of versatility,” said the coach. “You could imagine a midfield that can move around and shift around and not stay in one position, and at one time one guy played attacking midfield, the other guy played the 6. So I really like the midfield, I think that could be the strength of this group … In theory, it’s great. We’ll see how it works in practice, though.”

In recent months the USMNT welcomed several highly promising dual and tri-eligible players to the fold, seemingly a sign of an effective approach to recruiting. Major events like the Gold Cup cap tie players, with some opting for other countries or leaving their international future open.

Ayo Akinola has officially switched his international registration to Canada. Efrain Alvarez’s inclusion in Mexico’s squad and recent statements from their manager, Tata Martino, suggest he’ll make a similar choice. Amando Moreno and Alex Roldan joined El Salvador as Los Catrachos gear up for their return to the final round of qualifying. A few months after representing the US in Olympic qualifying, young LA Galaxy right back Julian Araujo has taken a step back to consider his options, with Mexico reportedly interested.

This choice is a deeply personal and individual one for any dual-eligible player. Teams try to put their best foot forward and accept that you win some, lose some. It’s a sign of the program’s recent progress and growing depth that the prospect of “losing” such players appears to be less upsetting to fans than it might’ve been in the past. Berhalter’s words about Araujo’s outlook illustrate the current levels of competition for places.

“I don’t want to speak for him but I can imagine when he looks at the depth of the right back position, he sees a logjam there, and he doesn’t maybe fully see his pathway to being a starter in the next World Cup,” he said. “What I can tell you is, we really value Julian and we think he’s an outstanding player, and we think he can make a run at being a starter on this team. A lot of it’s going to be up to his form and his development but he’s a young, talented player, and we think that he does have a future with his team.”

As much oxygen as they can consume, some recruitment sagas turn out to be much ado about not much. Time will tell.