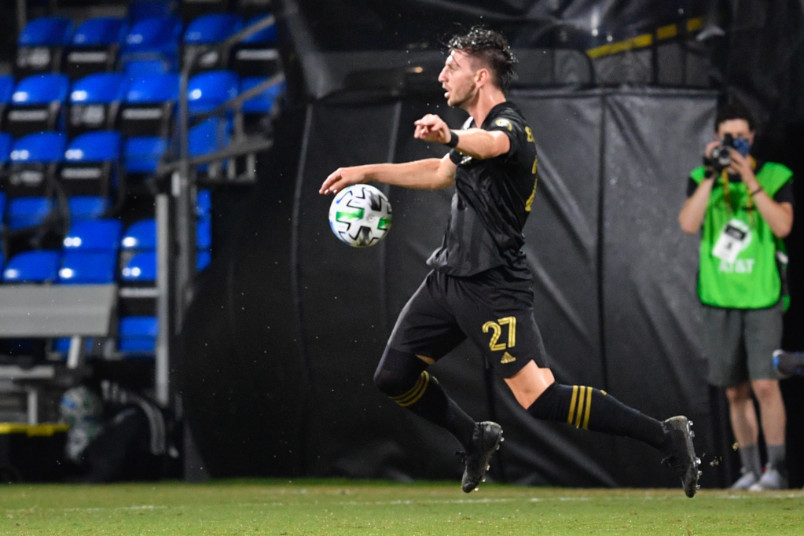 By Luis Bueno – RIVERSIDE, CA (Jul 14, 2021) US Soccer Players – For any MLS club, the chance to land a 21-year-old attacking player fresh off a major international tournament who spent the previous season in Europe seems like a major victory. A player like that should add quality to the team, making them more dangerous going forward. LAFC could use such a player, particularly on the attacking end. It’s exactly this kind of talent who could land at Banc of California Stadium, although in interesting circumstances.

Brain Rodriguez could rejoin LAFC this summer after spending the first part of 2021 on loan to the Spanish side UD Almeria. Rodriguez, who was with Uruguay for the Copa America, saw his loan deal end in an unceremonious manner in May with a fine and a bust-up with an Almeria teammate.

A return to Los Angeles seems possible, but it’s not inevitable. LAFC coach Bob Bradley said last month that he would welcome Rodriguez back if the club could not find a deal that made sense for both sides. Coming back to LAFC then seems like the backup plan. Rodriguez himself said he had his sights set on a potential return to Uruguay.

When he joined LAFC, Rodriguez’s profile seemed too good to be true. At 19-years-old, he had jumped from Uruguay’s Under-20 national team to the senior squad, playing in important matches with los Charruas. After joining LAFC, he was still getting called into Uruguay even over LAFC teammate Diego Rossi, despite Rossi’s stellar club output.

Rodriguez turned two goals and seven assists in 26 regular-season games in MLS into European interest. He made the loan move to promotion candidate UD Almeria over the winter. Rodriguez ended up starting four games and coming off the bench for another ten. Almeria finished fourth, exiting in the promotion playoffs to 3rd-place Girona.

How the season ended for Rodriguez became its own issue. First, he spoke with Uruguayan television network Teledoce in mid-May, which was a violation of team rules. During that interview, he said his representative had been in talks with Uruguayan club Penarol about a possible return to Montevideo despite one club (LAFC) holding his rights and another club (UD Almeria) paying to use him for that season.

Then, Rodriguez and teammate Umar Sadiq argued over the taking of a free kick during a league match. Rodiguez went to take it, but Sadiq ripped the ball out of Rodriguez’s hands. Teammates had to hold Rodriguez back as he tried to confront Sadiq. After the match, Rodriguez took his jersey off and again tried to confront Sadiq as teammates once again separated them. The tiff continued into the locker room. Almeria coach Joan Francesc Rubi told reporters that the near-fight had been “sins of the youth” and promised the club supporters that it would not happen again.

Rubi left Rodriguez off the team roster for the next match. The club also fined Rodriguez for his interview and he did not play again for the club before joining Uruguay for international duty.

With Uruguay for World Cup qualifying and the Copa America, Rodriguez would play seven minutes in the June 3 qualifier against Paraguay. Now his future seems up in the air. If what Rodriguez said during his television interview in mid-May is accurate, then there seems to be interest from his former club Penarol. That move might be best for Rodriguez but whether Penarol officials are willing to pay for him is the question LAFC reportedly spent $12m to land Rodriguez back in 2019.

Given LAFC’s offensive issues, they could use Rodriguez’s help. LAFC has had a rough go of it this season, but the club has climbed back into contention. They’re in 5th-place in the Western Conference with a 5-4-3 record, but have only scored 15 goals in a dozen games. Sporting KC leads the Western Conference with 24 goals. Five other conference foes have scored more goals than LAFC.

That could be the likeliest move. Active on social media, Rodriguez updated his Instagram account profile to say he is back in Los Angeles and part of LAFC. Suppose he can play with the same energy that put him on LAFC’s radar and eventually their roster. In that case, this could be the equivalent of the midseason pickup of a designated player without any additional outlay. That’s something any MLS team would take without a second thought.