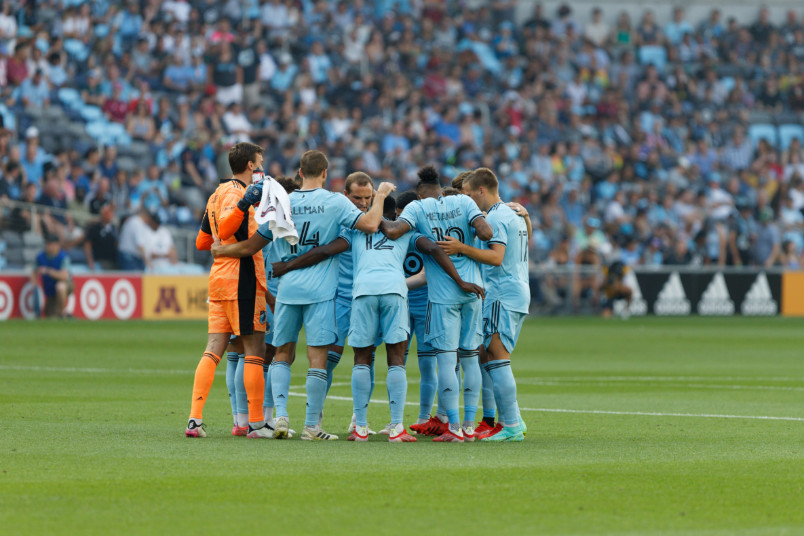 By Jason Davis – WASHINGTON, DC (Jul 30, 2021) US Soccer Players – On Thursday night in Los Angeles, LAFC played to a 2-2 draw with Minnesota United. Two clubs with MLS Cup ambitions split the points in an entertaining game that featured a goal from Carlos Vela and a stoppage time equalizer from United’s Hassani Dotson.

Those positions in the table represent something of a disconnect for LA and Minnesota from preseason expectations and in-season potential. If the goal is to simply make the playoffs and then push on from there towards an MLS Cup title, then there’s little to complain about. However, if LAFC and Minnesota hold higher ambitions, 2021 has left a lot to be desired.

LAFC and Minnesota aren’t the only clubs under-performing to expectations approaching the halfway point of the season. There are other teams stuck in neutral. It’s a situation where those teams risk getting passed in the standings.

For the clubs still not certain of their chances at the playoffs, LAFC and Minnesota United included, the time is now for change. The secondary transfer window closes next week, and with it an opportunity to add pieces with more than half of the season remaining. Several clubs stuck in neutral have players returning from injury or will get players back in short order. Spending resources on reinforcements now might not be necessary.

LAFC’s 2021 season got off to a rough start with an opening day injury to Carlos Vela. Assessing LAFC’s season to this point is more difficult because of that period without their star. Diego Rossi did an admirable job picking up the slack, but no one would suggest LAFC can be at its best without Vela in the lineup.

With his goal against Minnesota, Vela now has goals in four straight LAFC matches. That’s a strong indicator that he’s returning to peak form and that better times are ahead for the Black & Gold. That possibility hasn’t left the club sitting on its hands, however. After trading club original Mark-Anthony Kaye to the Colorado Rapids for $1m in General Allocation Money, the expectation is that LAFC will spend in the transfer market.

At its best, LAFC utilized a three-man forward line with Vela and Rossi playing off a strong center forward. Back at the heights of the Supporters’ Shield season in 2019, that role fell to Adama Diomande or Christian Ramirez. LAFC traded Ramirez to Houston after that season. Diomande left the club for personal reasons during the pandemic lockdown of 2020.

Pandemic-altered 2020 played out with youngster Danny Mosovski and veteran Bradley Wright-Phillips sharing the center forward duties. Wright-Phillips departed for Columbus following the season. Though Musovski is still in the picture at LAFC, Bradley has shifted away from using a center forward. Instead, he plays Vela, Rossi, and others in that area of the field. To get into higher gear, LAFC needs a solution. Reports linking the club to Millionarios forward Cristian Arango hint at their plan.

Minnesota just needs the players it already has in the team to raise their game. A rough start to the season undercut the team, which has just a single loss in its last ten matches but still sits in 6th-place.

Following his brilliant showing down the stretch of the 2020 season and in last year’s playoffs, Emmanuel Reynoso carried big expectations for 2021. Reynoso’s goal against LAFC raised his season total to two, collecting just four assists in 14 appearances.

The Loons have spent money to get better this season. Striker Adrien Hounou may yet prove to be a force in MLS. Franco Fragapane, showed flashes of attacking prowess in his six starts. Unfortunately for Minnesota, Fragapane is now out with a thigh injury, and Heath won’t have his full complement of attackers for at least a month.

In the backline, United lost fullback Chase Gasper to an early injury in the draw in LA, prognosis pending. Right now, Heath will have to get the most out of what he has available. It could be worse. LAFC and Minnesota would make the playoffs if the season ended today. The Portland Timbers would not.

Maybe no team in MLS dealt with more big blows to its 2021 chances over the last year than Portland. The Timbers lost two Designated Players to long-term knee injuries in 2020 when both Sebastian Blanco and Jaroslaw Niezgoda tore ACLs. Jeremy Ebobisse entered the year still recovering from a concussion suffered late in 2020, further complicating the issues in the attack for coach Giovanni Savarese.

Diego Valeri’s days as an MLS Best XI player are probably over, but the Timbers legend has done his part to keep them afloat while they awaited reinforcements.

The Timbers look primed to make their move as July turns to August. Both Blanco and Niezgoda are on their way back to full fitness. The club added forward Santiago Moreno from America de Cali of Colombia on Thursday. Moreno joins the Timbers under the league’s new U-22 initiative. That allows high-dollar signings that don’t take up Designated Player slots on the roster.

Savarese now has the task of integrating and re-integrating these new additions to Portland’s active roster. The Timbers have the potential to climb into the playoff picture in the West. If Portland’s going to get in, it will have to do it at the expense of one of the teams currently in the West’s top seven.

Through the first half of the season, those teams have played well enough to make this a significant challenge. Well, at least in theory. This is still MLS. Some club is bound to hit a dip in form. When that happens, it’s up to the clubs currently stuck in neutral to find a hit to kick into that higher gear and make the passing move.