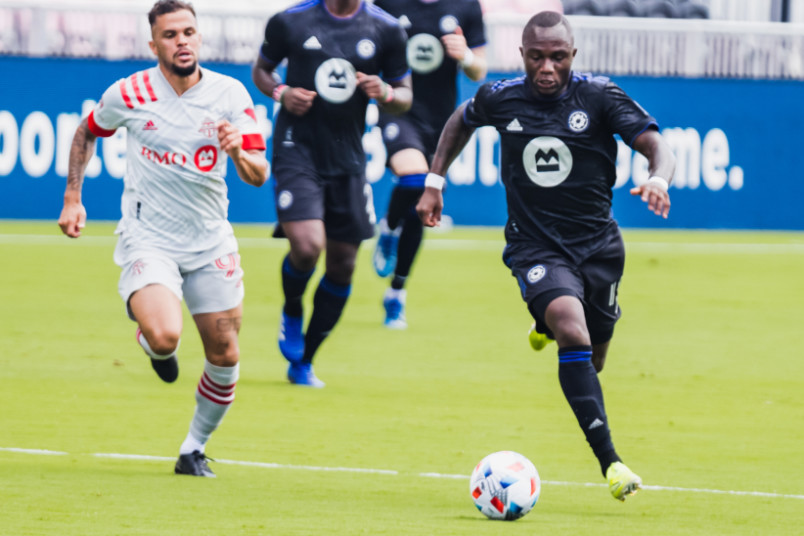 By J Hutcherson (Jul 13, 2021) US Soccer Players – Though it’s certainly closer than last season, it’s still difficult to describe 2021 as normal for Major League Soccer. The easiest example of that is the three Canadian teams starting the season in the United States. Pandemic protocols made it unreasonable to hold league games in Canada. Once again, that forced the Canadian teams to try and establish home field advantage somewhere else. Vancouver relocated to Rio Tinto Stadium, Montreal joined Miami in Fort Lauderdale, and Toronto shared Exploria Stadium with Orlando City.

What that patented version of parity MLS prides itself in certainly could’ve kicked in for any or all of these teams, the standings show that Montreal is doing the best of the three. Club de Foot is in 4th-place in the Eastern Conference, leaning on a five-game undefeated streak to climb the table. That includes beating Inter Miami as the home team at Inter Miami Stadium.

It’s a different scenario for the other two. Vancouver is bottom of the Western Conference, winning two games so far this season. Their last game was a 4-0 loss to Real Salt Lake as the home team at Rio Tinto Stadium. Toronto is tied on points with Inter Miami but with an extra game played in last place in the East. Inter and Toronto are also behind Vancouver in a combined table.

When any of them will return to Canada is still an open question. Toronto and Montreal moved training there this week, but that’s due to the international break. The hope is that leads to their next games played at their real homes. Getting there required all players to be vaccinated, something that led to Montreal trading Erik Hurtado to Columbus. Vancouver is still in a holding pattern about a return to BC Place, highlighting the differences in Canadian teams getting back to their cities.

It’s easy enough to put that focus fully on Toronto. They’ve had a coaching change after losing 7-1 at DC. Jozy Altidore’s absence due to a disagreement with the coaching staff is now over. Altidore spoke at a press conference on Monday saying, “Sometimes things go how they go, but in the end my commitment, wanting to win, wanting to be a part of the city, this group, it hasn’t changed.”

Toronto won a worst vs 1st encounter at New England 3-2 in their last game, breaking a five-game losing streak. That result may say as much about the Revs as it does Toronto, with New England’s tendency to give up goals finally catching up with them. For Toronto, it could be the springboard they’ve needed. The last time Toronto took points from back-to-back games was a 2-0 win over Columbus in Orlando followed by a 1-1 draw at NYCFC. Their next game is home to Orlando City on July 17 with where home is listed as “to be determined” on their schedule.

It’s an interesting scenario with Montreal handling enough of their business playing at home in Fort Lauderdale. Putting so much on actually playing at home makes sense, but it can also turn into yet another problem.

Altidore spoke about that during his media availability. “All the teams we play against there are certain moments of the game where having that crowd and having that momentum helps,” he said. “You can’t sugarcoat that. Had we had a home game, a real home game, during this stretch, things would look a lot different. A home game to feel safe, to feel loved, to have people pushing you. We’ve been robbed of that for quite some time, so being back in Toronto and hopefully having that will only help us push forward now.”

More than anything, what it does is make a team own its results. There’s no longer the tendency to point at what amounts to a long and inconvenient road trip for bogging down results. Building momentum as a relocated team is a significant ask for any group of players, further underlining what Montreal is doing higher up the Eastern Conference table. They’re also facing a to be determined scenario for their next home game, potentially hosting FC Cincinnati at Stade Saputo on July 17. They’re also back home for training during the international break.

Toronto and Montreal’s situation is bigger than just those two teams. Orlando and Inter Miami get extra games at their home stadiums while the rest of the conference playing the Canadian teams in Florida face a different situation than a true away game. That readjusts the competitiveness of all of their schedules. How that changes with the potential for Toronto and Montreal playing at home undoubtedly changes things.

Right now, it’s Montreal looking like the team to take the most advantage. Still, Altidore is right. It’s hard to count out a team like Toronto because of experience and a willingness to adjust. There are enough games left to make a run and a tightness in the table to see a few wins change things.

What 2021 quickly became is a significant ask for all three Canadian teams. Montreal is doing the best right now, but there’s enough left to play to see things change. Home field importance in MLS is normally an open debate, but in this situation, there’s no doubt it counts. How much is what Toronto is now asking.