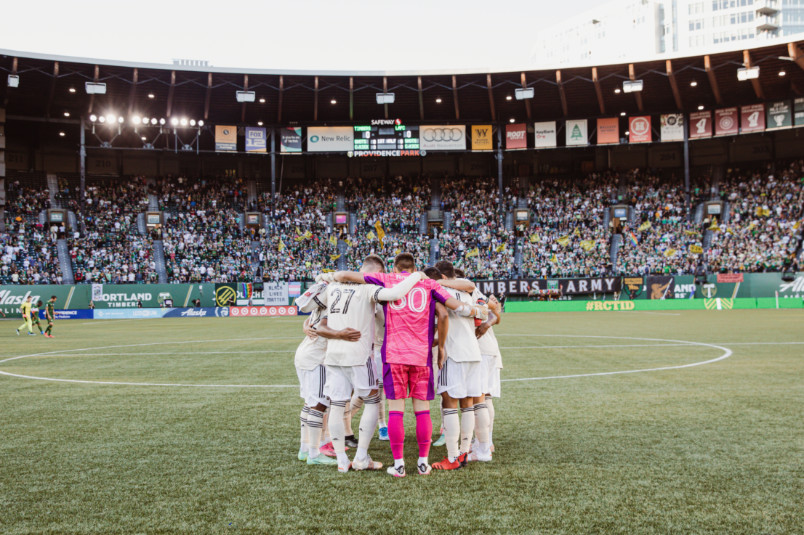 Thursday’s soccer news starts with the MLS midweek schedule. Columbus and Nashville finished 0-0 at Lower.com Field. The Crew put seven shots on target to Nashville’s one. NYCFC shutout Montreal 1-0 at Red Bull Arena. Ismael Tajouir scored in the 29th minute with Luis Barraza making one save to keep the clean sheet. Toronto and the Red Bulls drew 1-1 at BMO Field. Patryk Klimala put New York up in the 46th with Toronto’s Ralph Priso equalizing in the 62nd minute.

New England had no problem in Fort Lauderdale, beating Inter Miami 5-0. Arnor Traustason scored in the 15th with Teal Bunbury doubling the lead in the 27th. It was Traustason again in the 36th with Adam Buksa making it 4-0 in first-half stoppage time. Buksa scored again in the 83rd minute. Revolution goalkeeper Brad Knighton made one save for the shutout.

“I thought (Miami) started the game pretty strong,” New England coach Bruce Arena said. “In the first 10 to 15 minutes, I thought they got after us a little bit. And then obviously the first goal relaxed us a little bit and gave us a little more confidence. Then clearly, the second or third goal killed Miami.”

Chicago and DC United drew 2-2 at Soldier Field. Gaston Gimenez scored for the Fire in the 32nd with an own-goal doubling the lead in the 61st minute. DC’s Kevin Paredes pulled a goal back in the 82nd and Ola Kamara equalized from the penalty spot in the 87th minute.

“I think when we’re playing at home and you drop points, it’s always a missed opportunity because we know the amount of home games that we have in the front end of the season and we have to take advantage of that,” Chicago assistant coach Frankie Klopas said. “And you know, we came into this game, I felt really good with the preparation with the guys after the setback in Nashville, and things were going great.”

FC Cincinnati and Atlanta drew 1-1 at TQL Stadium. Luciano Acosta put Cincinnati up in the 61st minute with Ronald Hernandez equalizing for United in the 70th.

“(T)here’s a lot of things I didn’t want to change,” Atlanta interim coach Rob Valentino said. “There’s a lot of things I thought they’ve done very well. These guys have put in a tremendous amount of work in the past. These things don’t happen overnight and performances like that are building blocks from what they’ve done before. I try to continue on some of the things they’ve done that I feel like I can add as a coach. But I’m also a different coach. I will coach in different ways because it’s just the way it goes, right.”

Sporting Kansas City and San Jose drew 1-1 at Children’s Mercy Stadium. Nathan Cardoso made it 1-0 San Jose in the 53rd. That score held into stoppage time with Daniel Salloi equalizing four minutes in. The Earthquakes finished a man down with a red card to Judson Tavares a minute later.

Colorado shutout FC Dallas 2-0 at home. Lalas Abubaker scored in the 48th with Michael Barrios doubling the lead in the 55th. Rapids goalkeeper William Yarbrough made two saves to keep the clean sheet.

Real Salt Lake drew 2-2 at home with the Galaxy. Albert Rusnack scored for RSL in the 9th minute with Maikel Chang adding a goal in the 25th. The Galaxy responded with goals from Victor Vazquez in the 33rd and Rayan Raveloson in the 77th minute.

Moving to UEFA Champions League second round qualifying, Jordan Siebatcheu and Young Boys drew 0-0 at Slovan Bratislava. Both teams finished with two shots on goal. Siebatcheu saw yellow in the 38th minute. DeAndre Yedlin wasn’t in the squad for Galatasaray’s 5-1 loss at PSV. Down 2-0 to goals in the 2nd and 35th, Emre Kilinc scored for Galatasaray in the 42nd minute. PSV added goals in the 51st, 84th, and 88th minutes.

Also in the soccer news, Orlando City announced that the Wilf family are now the club’s investor/operators. “We are humbled to become stewards of Orlando City SC and the Orlando Pride, clubs with strong and established foundations on the pitch, with renowned supporters and a passionate fan base, and in a community we are extremely proud to represent,” the club’s new chairman Mark Wilf said in a press statement.

Hibernian announced that a pre-contract. The Athletic’s Jeff Rueter reports on the United Soccer League planning for its future. The Guardian’s Ben Fisher with how Sutton United has prepared for league soccer.