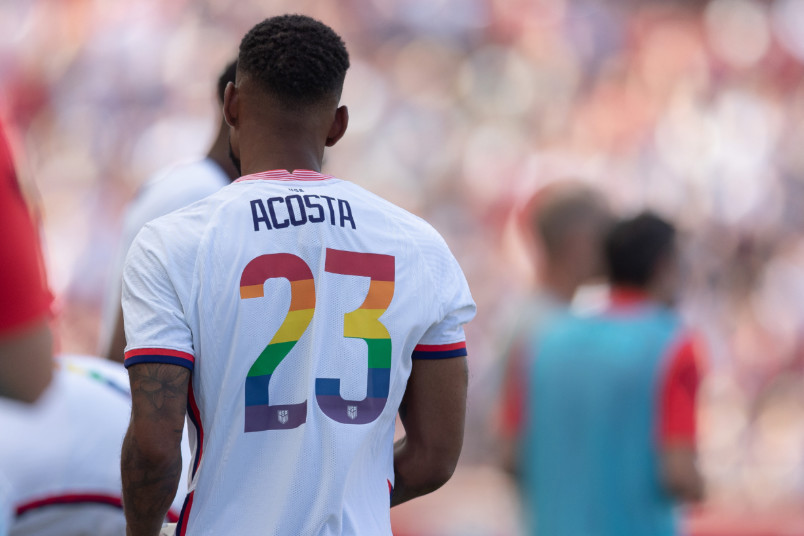 By Jason Davis – WASHINGTON, DC (Jul 7, 2021) US Soccer Players – Every two years, the story is the same. The Gold Cup arrives and Major League Soccer shifts into “Make Do” mode. Concacaf’s championship may give a bigger stage to players who would otherwise be left to toil in the shadows, but it sure throws a wrench in things for MLS teams. Depth gets tested. Coaches must turn to more unheralded names. 2021 even has a bonus wrench with a pair of players heading off to the Olympics tournament in Japan.

Teams who started strong this season have a buffer in the standings. They might need it, depending on how much they lose to international duty. Then there are the teams who aren’t getting calls from national teams. For them, July and early August represent a chance to make up ground. Let’s start with the hardest-hit teams.

It’s a credit to Robin Fraser and the Colorado Rapids organization that USMNT head coach Gregg Berhalter tapped three of their players for Gold Cup duty. It’s also a problem for Fraser as he tries to build on the opening portion of the MLS season. Colorado holds the fourth spot in the Western Conference standings. That speaks to the team’s progress since Fraser got that job at the end of 2019.

Kellyn Acosta, Sam Vines, and Jonathan Lewis will likely be away for the full length of the Gold Cup period. Each is a critical player for Fraser in Colorado’s setup, although Acosta and Vines are the regulars in the starting lineup. Acosta, in particular, is a Swiss army knife of a player for the Rapids. He covers ground and contributes on both sides of the ball in midfield. Acosta also accentuates the talents of players around him. Rounding out what he means to the squad, he’s also filled in at the back when required.

Twenty-two-year-old Vines is a rising player in the national team setup because of his steady play at left back for Colorado. Lewis has largely been a substitute under Fraser this season, but his game-changing speed is the perfect weapon to have in reserve.

With the trio gone, juggling will happen. The Rapids have injury concerns in Acosta’s preferred midfield position as Younes Namli is recovering from ankle surgery. The club may need to go shopping for help with the summer transfer window open as of Wednesday.

The first day of the secondary window looms large for clubs left shorthanded by international call-ups. Whether clubs go abroad in search of reinforcements is unclear following the financial impact of the pandemic, but moves within the league should be plentiful.

Columbus can rival Colorado for important losses during the Gold Cup. The Crew’s call-ups are more plentiful than the Rapids’, with five players on international duty. That includes goalkeeper Eloy Room of Curacao, midfielder Liam Fraser of Canada, and Gyasi Zardes of the United States. Room is the first-choice goalkeeper for the Crew. He’s an example of what the Gold Cup can mean, winning the job after impressing in the 2019 edition of the Gold Cup. His absence means Columbus turns to former Montreal Impact starter Evan Bush.

Filling in for Fraser and Zardes is more difficult because of injuries at both positions. Off-season signing Bradley Wright-Phillips is out with an unclear timeline for his return at forward. Add Perry Kitchen and Artur also deal with injury absences. Artur figures to be out well past the Gold Cup window.

The Crew will also be without Trinidad & Tobago’s Kevin Molino, a player who was limited early in the season due to a hamstring problem will now head off for at least the group stage of the tournament. Columbus head coach Caleb Porter has a few more options at winger than elsewhere but has had to shift those players into other positions as cover.

For a team that has struggled to score goals in 2021, the next month could be very telling. If Columbus can’t find enough punch in front of goal to stay afloat, the club may be out of the playoff places by the time the Gold Cup contingent returns.

Other clubs who will be reaching deep down the roster over the next month. That includes the LA Galaxy (five players called up), Toronto FC (five players while the club goes through a coaching transition), Atlanta (four players, among them starting defenders George Bello and Miles Robinson and goalkeeper Brad Guzan) and Nashville SC (three players, including 2020 Defender of the Year Walker Zimmerman). Key players will be missing for the Sounders (Cristian Roldan and Alex Roldan), Philadelphia (Andre Blake and Corey Burke), and Sporting Kansas City (Gianluca Busio and Alan Pulido).

What’s bad for some clubs is good for others. With the call-ups listed above weakening teams across both conferences, teams that won’t lose key pieces figure to benefit. Chief among them are big market clubs on each coast: LAFC, who loses only Mark-Anthony Kaye to Canada duty for the Gold Cup, and the New York Red Bulls who won’t see any healthy players miss time.

Kaye’s spot in the midfield will go to Ecuadorian Jose Cifuentes, the man who scored LAFC’s lone goal in a win over Real Salt Lake on Saturday. Bob Bradley’s team has stepped up its defense in recent weeks, the largest reason for their climb up the Western Conference standings.

LAFC won’t have an availability advantage over most of its opponents between now and the end of the Gold Cup period. That starts on Wednesday night against Austin, who had no players called up for international duty. The consistency in the team for the summer gives Bradley a chance to build on the recent promise. The club will also get Brian Rodriguez back after a loan stint in Spain, which could boost the attack around Carlos Vela and Diego Rossi.

The Red Bulls’ steady climb into the playoff picture in the Eastern Conference has come despite injury problems across the team. Aaron Long won’t be back this season, but several players with smaller injuries that have missed games in recent weeks should be at full strength before the Gold Cup period is out.

New York’s schedule has been tough to this point and will start to get easier through the summer. Through July, the Red Bulls have a chance to pick up points against a pair of bottom feeders and clubs hit by notable international absences.

For most clubs, the Gold Cup is a problem to be overcome, requiring coaches to tinker and squad players to raise their games. For others, it’s an opportunity, one they can’t afford to let slip by.