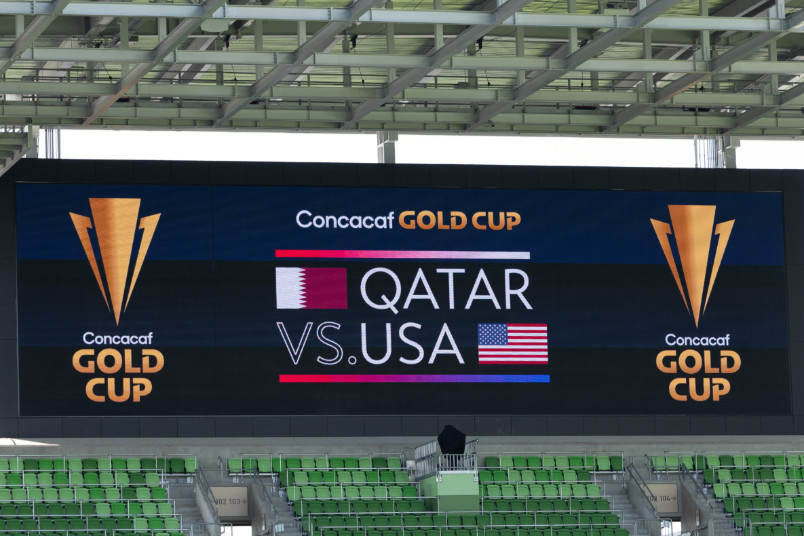 Thursday’s soccer news starts with matchday for the USMNT in the 2021 Gold Cup, facing Qatar in the semifinals (7:30pm ET – FS1). Qatar advanced with a 3-2 win over El Salvador while the USMNT saw off Jamaica 1-0. Both of those results raised questions about the winning team. Qatar couldn’t hold a 3-0 lead while the USMNT left it late with an 83rd minute winner.

What that raises for both teams later tonight is what should count as realistic expectations. Playing up the Qatar attack only goes so far when their nine goals in group D were only one better than the USMNT and Canada in group B. Qatar topped the group with a +6 goal difference, but that was less than the USMNT’s +7. Qatar loaded up in a 4-0 win over Grenada in the second matchday, but Grenada also lost its opener by the same score to Honduras and eventually gave up 11 goals. Against tougher competition, Qatar drew 3-3 in perhaps the most entertaining game of the group stage in its opener against Panama. They beat Honduras 2-0 in the group D finale, and that game should be what the USMNT technical staff focused on in preparing for the semifinal.

Against Honduras on July 20, Qatar took the lead in the 25th minute and had a penalty saved in the 41st. They shut down Honduras’s hopes for a late equalizer by scoring late in stoppage time. Content to let Honduras have more of the passes and possession, Qatar outshot them 19 to 8 and put six of those on goal to none for Honduras.

While it’s hard to see the USMNT’s offense stalling that badly, getting the offensive output numbers up would cause problems for Qatar’s tactics. Simply put, the USMNT needs to do more than hold possession and connect passes. Once again, El Salvador had the bulk of possession with 65% and outpassed Qatar 593 to 322 in their quarterfinal. Down 2-0 by the 8th minute, it was on El Salvador to push for the makeup goals. They finished one short, outshooting Qatar 15 to 11 with both teams finishing with five shots on goal. El Salvador’s goals came in the 63rd and 66th minutes, scoring two goals quicker than Qatar did.

The USA and Jamaica also finished with each team putting five shots on goal. The USMNT had the edge on shots taken 11 to 9 and a similar share of possession as El Salvador did over Qatar with 68% and 579 passes to Jamaica’s 283. The result was playing most of the game looking for that opening goal and seeing off real chances from Jamaica. Once again, if a team commits to limited possession in favor of taking advantage of its limited chances, the other team has to find its own way forward.

Style points don’t count in tournament play, something Qatar learned in that opening game against Panama. Going back and forth only to draw in regulation in the semifinal buys 30 additional minutes and potentially penalties. That’s not a game plan that should have Qatar overly confident. Instead, the expectation should be more of the same. Let the other team play, but make sure they’re the ones taking the shots that could turn into opportunities.

Based on what the USMNT has seen so far at this Gold Cup, this is the latest challenge. It’s not the pressure cooker against Canada to decide the group and it’s not waiting on a goal like the quarterfinal against Jamaica. Instead, it’s disrupting a set strategy that’s gotten the opposition this far.

Staying with the National Team, US Soccer announced that Columbus’s Lower.com field will host USMNT vs Costa Rica on October 13. “One thing you can count on in Columbus is unwavering support for the US team, and that’s going to be critical in helping us get a win against Costa Rica,” USMNT coach Gregg Berhalter said i. n a press statement. “Having coached there for five years and then attending opening day of the new stadium, I know first-hand just how incredible the bond is between the team and the fans. We can’t wait to play there.”

Moving to the Champions League second round qualifiers, Jordan Siebatcheu scored and picked up an assist for Young Boys in their 3-2 home win over Slovan Bratislava to take that series 3-2 on aggregate after a scoreless first-leg. Siebatcheu opened the scoring from the penalty spot in the 10th minute with Ulisses Garcia doubling the lead in the 24th. Michel Aebischer made it 3-0 in the 48th. Slovan Bratislava came back with goals in the 58th and 62nd, but couldn’t find a third. Siebatcheu subbed out in the 57th minute. Young Boys advance to play CFR Cluj in the third qualifying round.

Mix Diskerud subbed out in the 87th minute of Omonia’s 1-0 home loss to Dinamo Zagreb to lose the series 3-0. The goal came in the 78th minute. Omonia now drops to Europa League third round qualifying, playing Estonian club Flora with that series starting on August 5. DeAndre Yedlin’s Galatasaray lost 2-1 at home to PSV to exit Champions League qualifying 7-2 on aggregate. Down on the night to goals in the 37th and 59th minutes and up a man from a 74th minute red card, Mbaye Diagne scored in the 84th. Galatasaray drops to the Europa League third round, playing St Johnstone.

One game in MLS, with LAFC and Minnesota drawing 2-2 at Banc of California Stadium. Carlos Vela scored for LAFC in the 40th with Minnesota’s Emanuel Reynoso equalizing in the 49th. Tristan Blackmon restored the LA lead in the 77th with Hassani Dotson equalizing five minutes into stoppage time.

“Yeah, I’m still in a little bit of shock,” LAFC coach Bob Bradley said. “I thought overall we played a really good game. A lot of very good effort and I thought our effort was good. We just don’t finish it out. It’s a ball that gets hit up the field. We don’t… Cifu slows down, he thinks he’s been clipped in the face. Metanire puts it up, Marco doesn’t win the header, it comes loose. Moon is not quite tight enough, and Dotson smashes great shot. Incredible to let them have a point on a play like that.”