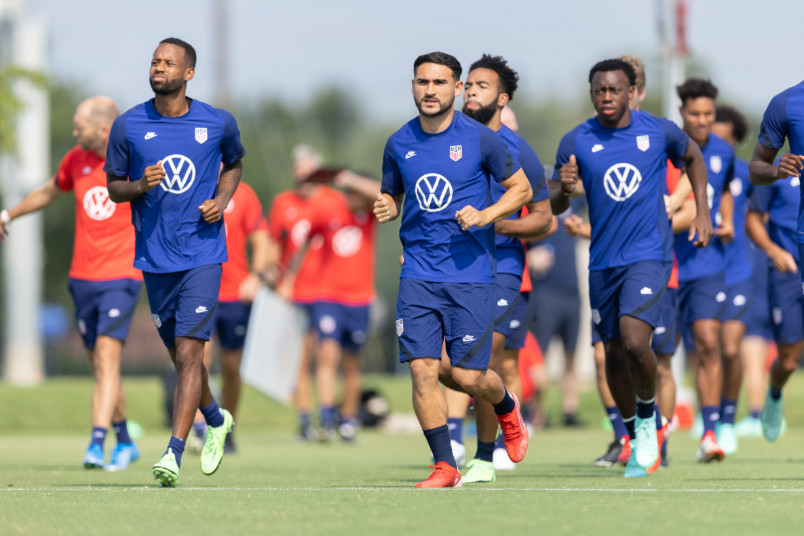 By Charles Boehm – WASHINGTON, DC (Jul 23, 2021) US Soccer Players – The USMNT begin their journey through the Gold Cup’s knockout bracket on Sunday with a quarterfinal matchup against Jamaica at AT&T Stadium in Arlington, Texas (9:30pm ET – FS1). It’s a familiar opponent in a familiar circumstance. The Yanks have extended their streak of 16 straight qualifications for the knockout phase of the tournament, dating back to its inception in 1991. Still, the few veterans on the current squad have counseled their younger teammates to expect a shift in atmosphere from here on out.

“I’ve been in multiple Gold Cups and once you reach the knockout round it becomes a whole different environment. You have a game plan, but sometimes things don’t go the way you think it would,” striker Gyasi Zardes told reporters on Wednesday. “It’s going to be a hard-fought battle, I know that for a fact. It’s very physical. And you’ve got to prepare to play more than just 90 minutes.”

After three group stage games in eight days, the schedule has provided the opportunity to recover and prepare with a full week before the quarterfinal match. If all goes according to plan, it will be the first of three games in nine days culminating with the cup final in suburban Las Vegas on August 1.

Each round is a test to survive and advance, and not just for the group as a whole. A step forward for the collective also extends the period in which individual players can show their abilities to coach Gregg Berhalter and his staff as they consider their choices for the World Cup qualification rosters starting in September.

“Everyone in this tournament has an opportunity to be able to secure their spot in World Cup qualifying, that’s the reality of the situation,” said Reggie Cannon last week. “We have a lot of players over in Europe that are succeeding at a high level, and it’s going to be a matter of proving every step, every game with the national team that you can compete with those options.”

With Jamaica also part of Concacaf’s third and final round on the road to Qatar 2022, Sunday’s showdown is a preview of sorts for the Octagonal as well. The USMNT will host the Reggae Boyz on October 7 then visit Kingston on November 16. Jamaica last qualified in 1998, facing a steep task this time around.

The United States carries a successful history in this matchup. The USMNT are 17-3-8 all-time against Jamaica and carry a 5-1 edge in Gold Cup play. Their sole loss in the event came in 2015 when the Reggae Boyz upset them 2-1 in the semifinals.

Most recently, the Yanks won a March friendly in Austria 4-1 and Jamaica snatched a 1-0 win against an experimental US lineup in a June 2019 friendly in Washington, DC. Several of Jamaica’s mainstays are MLS-based, adding to the sense of familiarity. Like the US, though, the Caribbean side are evolving.

Jamaica has added to their player pool with dual-nationals from their large international diaspora like Ravel Morrison, Andre Gray, Amari’i Bell, and Daniel Johnson. It’s a work in progress. Coach Theodore Whitmore and his group are navigating the challenges of congested club schedules and transatlantic travel. Yet even a modest infusion of high-end talent threatens to make the program a tougher opponent than it already is with its quick transitions and unpredictable attack.

Jamaica’s performances so far at this Gold Cup has been up and down. They labored a bit against Suriname in their opener, scoring two early goals and then mostly conceding the run of play to the South American nation en route to a 2-0 win. They then had to rally from an early deficit against Guadeloupe with an 87th-minute Junior Flemmings strike delivering a 2-1 win. That allowed Whitmore to change out nearly his entire starting XI in their 1-0 loss to Costa Rica in the group C finale.

Forwards Flemmings, Gray, Bobby Decordova-Reid, and Shamar Nicholson are dynamic if unproven. Only Nicholson has a track record of scoring at international level. Fulham’s Michael Hector is a center back by trade working to shore up their central midfield. Bayer Leverkusen winger Leon Bailey might be the most talented player in the pool, a creative force still seeking a genuine breakout moment for his country.

The Reggae Boyz continue to rely on the Philadelphia Union’s Andre Blake to make key stops in goal. He’s posted seven saves and counting this month. Bell, Liam Moore, Damion Lowe, and Alvas Powell appear to be Whitmore’s first-choice back four at present. That group may be susceptible to the overloads and overlaps Berhalter aims to create going forward.

Which leads to another big question about Sunday. How will the USMNT line up? The 5-3-2 and 3-4-2-1 shapes they’ve added to their repertoire have utilized Shaq Moore, Sam Vines, and the rest of the fullback/wingback corps. Conversely, losing Walker Zimmerman to a hamstring injury raises new concerns about depth in central defense. Fielding Zardes and Daryl Dike as a strike duo was a new look with mixed results in the win over Canada.

A new rule change gives teams the option of swapping out injured or sick players up to 24 hours out from the quarterfinals. Cade Cowell and Henry Kessler have joined the squad in north Texas, but neither is officially added to the roster yet. Berhalter seems to be waiting on news of Dike’s and Paul Arriola’s injury status before making his moves.

Berhalter has taken a measured approach to charting that course, emphasizing focus, balance, and game-over-game improvement. Ready or not, the margins for error start crumbling this weekend.

“At the beginning of Gold Cup we got together and jotted down some goals – individual goals and things, markers that if we hit, we would be successful in Gold Cup,” said Zardes. “One of those was win the group, and we did that. So as long as we just keep chipping away at our goals and what we discussed internally, we’ll be successful.”