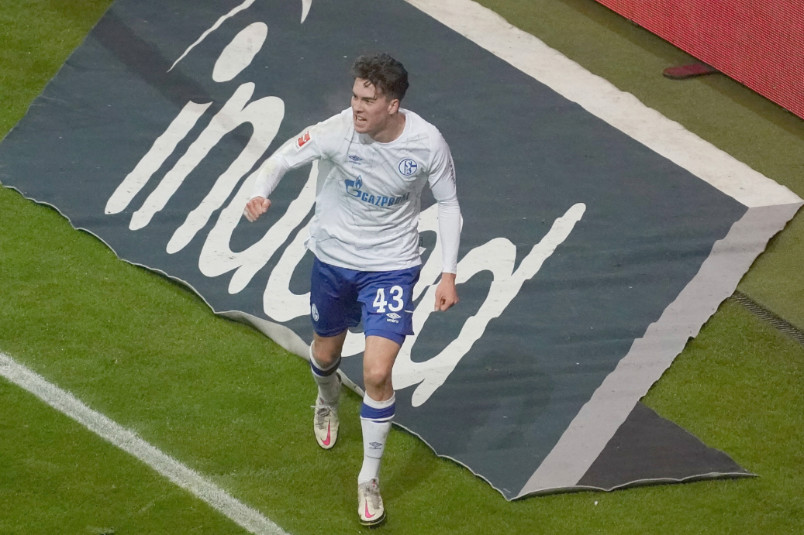 By J Hutcherson (Jul 20, 2021) US Soccer Players – The 2021-22 edition of the 2.Bundesliga begins on Friday with Matthew Hoppe’s Schalke 04 attempting to make their time in the second division brief. Schalke dropped down a division following a dismal season with three wins. It took until January 9 to get the first one, 4-0 over Hoffenheim. They beat Augsburg 1-0 on April 11 and Eintracht 4-3 on May 15. All three came at home, 9 of the 16 points that saw them finish at the bottom of the table with a -61 goal difference.

Hoppe took his chances during the season, becoming a regular and earning a professional contract. His rise from amateur to scoring option points to more to come, something he’s currently trying to show with the USMNT during the Gold Cup. That means no Hoppe for the 2.Bundesliga opener at home to Hamburg on Friday. Rumors linking him with a transfer to a topflight team in Germany or elsewhere in Europe have yet to play out.

With the pandemic hanging over everything at the moment, Schalke went into “a voluntary quarantine training camp” after goalkeeper Ralf Fahrmann tested positive for COVID-19. Schalke sporting director Rouven Schroder talked about the situation in a press conference on Tuesday.

“We have voluntarily decided to enter a quarantine training camp so that we can prepare as focused and professionally as we can for the season opener against Hamburger SV. We are obviously being careful regarding our health, which means following all the rules carefully. The whole team and the coaching staff are still having daily quick tests as well. As things stand, we’re certain Friday’s game will go ahead. We are in constant contact with the authorities and the DFL.”

Schroder also talked about the continual turnover at the club, the result in planning for a 2.Bundesliga season. “I don’t want to rule anything out right now. It’s a fact that we’ve got a limited budget and we mainly have to look at free transfers. We also need to get some players off the books too. Our aim is always to look to improve the squad. Transfers are still possible until the end of August, so I expect things to start getting busy again on the transfer market in the coming weeks.”

That’s no surprise considering what happened last season. Schalke finished 2nd in 2017-18, dropping to 14th the following season and improving to 12th in 2019-20. That took 39 points, in no way suggesting the collapse that would follow in 2020-21. Over that run from 2nd-place to relegation, Schalke went through four full-time managers with Huub Stevens twice serving as interim.

Former USMNT player David Wagner took the Schalke job for the 2019-20 season and improved Schalke to 12th. He was gone by the end of September in 2020-21 with the club opening the schedule with an 8-0 loss at Bayern Munich and 3-1 at home to Werder Bremen. Manuel Baum took over two days later, lasting until December 18 with the club still winless and losing his last game in charge 2-0 at home to Freiburg. Arminia Bielefeld beat them the next day 1-0 at the Veltins-Arena. Christian Gross was in charge from December 27 through February 28. Schalke won in his second game, but lost the next three. Following a 4-0 home loss to Borussia Dortmund and a 5-1 loss at Stuttgart, Schalke made their third coaching change of the season.

There was no revival act under Dimitrios Grammozis, but leading Schalke to two wins was twice as many as his predecessor. He kept the job even as Schalke further collapsed over the final three months of the season. Three defeats in a row in March and early April. Four more from mid-April to early May in between the two wins. Stevens, the supervisory board member who filled in briefly as coach between Baum and Gross, left the club at the end of the season.

Looming over the entire operation is a debt load reportedly around $225m at the start of last year’s troubled season. That underlines what Schroder said about his club’s “limited budget” and the need to cut existing salaries. While some tried to use that to make broader points about the situation across the Bundesliga during the pandemic, Schalke remains the outlier. They’re the ones not breaking 20 points during a Bundesliga season and dropping divisions. Now, they’re the ones that have to come up with a workable business model that keeps them competitive.

It took over 60 points to get into a promotion place last season, and 3rd-place Holstein Kiel with 62 didn’t win the playoff with 16th-place Bundesliga finisher Cologne. All that does is add to the pressure at Schalke, where getting back to where they were a few seasons ago now looms over every decision.

Last season’s problems presented an opportunity for Hoppe. This season does as well, with the potential for him to be one of the players making a difference in difficult times with Schalke or moving on as the club faces its financial problems. It may not be fair to put that kind of pressure on a player who didn’t sign as a professional until after he had scored goals in the Bundesliga, but that’s the situation. It’s the risk vs reward of the game at this unexpected level where Schalke 04 is now playing.