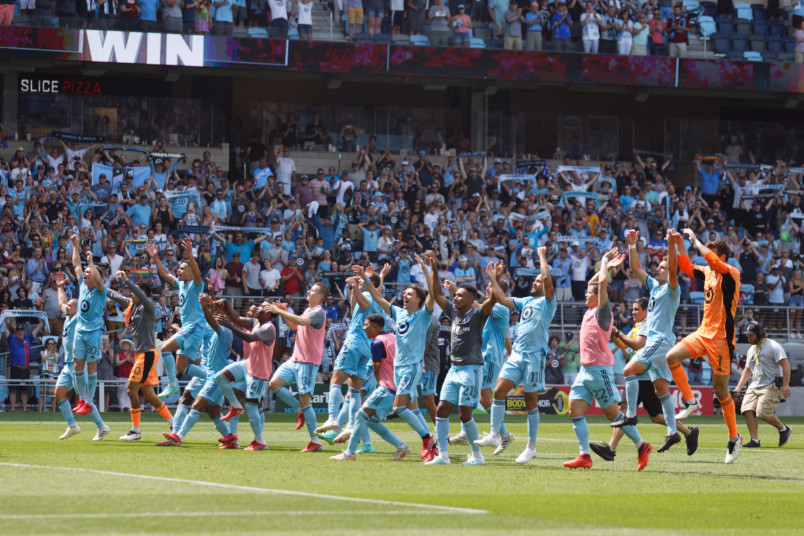 By Luis Bueno – RIVERSIDE, CA (Jul 28, 2021) US Soccer Players – The Seattle Sounders have been flying high since the start of the season. They entered the month undefeated with the stingiest defense in MLS and atop the Supporters’ Shield table. In the span of a week, though, the luster has come off the Sounders’ shine.

Seattle lost its first and second games of the season during this rough eight-day stretch. Its record is not as pretty as it was prior to its game against Minnesota United on July 18. Nashville SC now has the fewest losses in the league, not Seattle. And New England has overtaken the Sounders in the Supporters’ Shield race. Next, the sky will be falling. Up is down, left is right. The end is nigh.

Such is the high bar Seattle has set for itself. Losing two games in an eight-day span feels like, if not the end of the world, then at least a stormy stretch of doom and gloom. Spoiler alert: it is not.

All teams go through their highs and lows, even the Sounders. This current Sounders squad is in the midst of their dynasty, where more often than not, they have been the one dictating terms. Fresh off an MLS Cup appearance after winning two of them since 2016, Seattle has been the class of the league for some time now.

Still, this last week has been rough. The team looked punchless against Minnesota United and was outclassed by Sporting KC, at home no less. The Sounders struggled in its win over Austin, sandwiched by the losses.

Unlike recent seasons, however, the Sounders are not destined for a spiral. In fact, this has been its best season since the dynasty began in 2016. Even though the Sounders have been in four of the last five MLS Cups, for three of those seasons they struggled terribly at times. In 2016, things were going so badly that they made a coaching change en route to the title.

That success did not lead to regular-season dominance in 2017 as the Sounders carried a very pedestrian 5-6-7 record into July before taking off with six wins in a seven-game stretch that summer. The year ended with a loss in MLS Cup. There was no regular season breakthrough early in 2018. The Sounders were 3-9-3 through 15 matches that season before reeling off winning streaks of nine games and five games.

Seattle looked solid midway through the 2019 season, but the club faltered down the stretch. They went 4-7-2 record toward the end of the season. The Sounders dusted themselves off and won MLS Cup anyway. They got the chance to defend that title last season, the favorites in what turned into a home win for the Columbus Crew.

Right now, the Sounders are looking for a quick return to their version of normal. While the loss to Sporting KC was particularly bad, there is no way around that. Like KC, Seattle was down players due to injury (Nico Lodeiro, Nouhou) and Gold Cup duty (Christian Roldan, Alex Roldan). Unlike Seattle though, Sporting KC managed to succeed in spite of those absences. The schedule favored Sporting, idle since July 4 while Seattle was coming off of a road swing. Even with a depleted lineup, Seattle beat a tough Austin FC side and had a strong showing against Minnesota United four days before that.

To compensate for missing players, Seattle has turned to some of its youngsters. The win at Austin featured five teenagers for the first time in league history. The quintet included 15-year-old Obed Vargas, who became the third-youngest player to play in an MLS match. Those were difficult circumstances with Seattle getting players on short-term loans from their reserve team, USL side Tacoma Defiance.

Even in that lineup, it was regular scorer Raul Ruidiaz bagging the game-winner against Austin. Having so many young players and still taking three points speaks well for the youth that the Sounders have at its disposal. It’s a potential preview for the future of the squad.

For now, the Sounders’ outlook for the rest of 2021 is superb. Seattle will be able to recover against San Jose and FC Dallas. Two games against Portland await in August. The schedule seems a bit tough down the stretch with five of its last seven games coming against Colorado (twice), LAFC, Sporting KC and the Galaxy.

If nothing else though, that final push will help get Seattle ready for the postseason and a run at its fifth MLS Cup appearance in the last six seasons. It’s a position any other team in the league would love to be in.