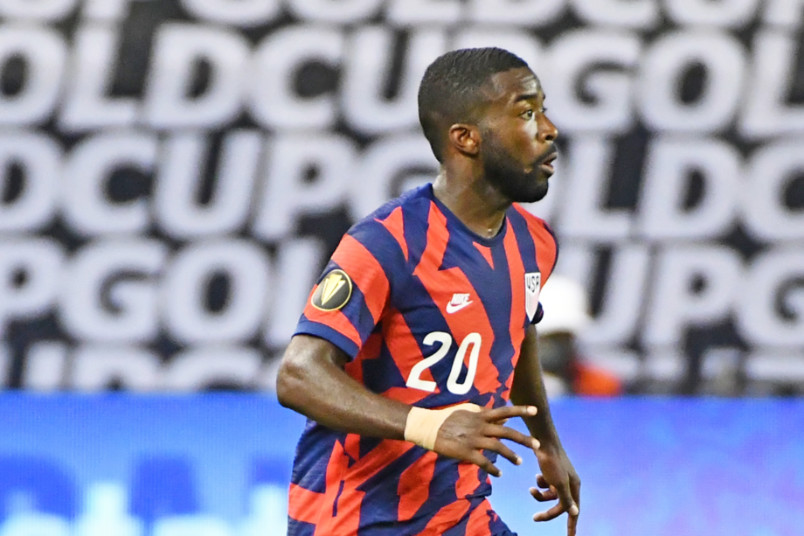 By Jason Davis – WASHINGTON, DC (Jul 14, 2021) US Soccer Players – If there was any consensus about the USMNT’s narrow 1-0 victory over Haiti in the team’s opening group stage game at the 2021 Gold Cup, it was about the performance of right back Shaq Moore. On a night when the defense fended off several dangerous Haitian counterattacks, it was Moore who stood out on the right side of the US formation with his play on both ends of the field. The 24-year-old was especially effective going forward and played a key role in the buildup to Sam Vines’s eighth-minute goal.

Considering the flavor of this Gold Cup from the American perspective, with an exhausting season just ended and World Cup qualifying just around the corner, it’s not all that surprising that Moore got a chance to play for his country this summer. Head coach Gregg Berhalter reached into the player pool in a bid to expand the group of players who can help the United States get back to the World Cup, and Moore was a deserving choice.

That Moore was so deserving probably escaped the notice of many USMNT fans. Moore “graduated” from the US youth national team program several years ago. After playing for the U-17, U-18, and U-20 teams, Moore moved into the ranks of the wide senior player pool when he aged out of the youth program. Following a call-up to the senior squad under interim head coach Dave Sarachan, he’s largely been off the radar.

Moore’s development speaks to an “out of sight, out of mind” attitude. Despite playing in Spain’s second division, a highly technical league with a strong reputation in Europe, Moore’s lack of television exposure makes him tough to follow.

After his career started with Levante, Moore’s move to Tenerife has proved significant for his growth. He played sparingly for Levante, with all six appearances coming in the 2017-18 season. Though it was that burst of games that put Moore into the spotlight for USMNT fans, his career quickly stalled.

Moore first moved to Reus in Spain’s second division, only to see that club fold following his one season there. The travails of a young professional career didn’t scare Moore, though it did delay his return to the national team.

“I’m just glad I was able to get into a situation in Tenerife where I can play, do my thing, and get back into the [USMNT],” Moore said after the win over Haiti.

Since his move to Tenerife, Moore has appeared in 66 games and racked up more than 5,000 minutes. No player in the Tenerife squad has played in more games or made more starts. His certain place in the starting lineup is why he’s one of the few European-based players in this squad. Despite the tournament’s place on the official FIFA calendar, the technical staff took great pains not to unsettle any of the European-based players. For many of the USMNT players based overseas, missing out on preseason is simply too much of a risk.

Berhalter is conscious of the need for depth at every position as the USMNT prepares for World Cup qualifying in September and is using the Gold Cup as a method to identify potential contributors. Moore happens to play a position where the United States has several young players on the rise. Twenty-year-old Sergino Dest lines up as a right-sided fullback or wingback for Barcelona. Twenty-three-year-old Reggie Cannon has already established himself as a national team regular and is building a career in Europe. Bryan Reynolds, like Cannon a product of the FC Dallas system, is also just 20 and will play his first full year with AS Roma of Serie A this season. MLS is also developing right backs, some of whom have been in the U-23s and recent senior camps.

That’s all the more reason for Moore to take his chance when it came on Sunday night. At 24, Moore is older than the other right backs in the pool but still young enough to have multiple World Cup cycles in front of him. There’s always the possibility that Moore could play a meaningful role.

Moore’s performance against Haiti showed a skill-set that fits with Berhalter’s preferred approach. He pushed forward, combining well with Kellyn Acosta and both Paul Arriola and Nicolas Gioacchini. While his crossing wasn’t perfect, it forced the Haitian defense into difficult positions more often than not.

The Man of the Match turn for Moore wasn’t just a good player who has improved in recent years showing what he can do when given a chance with the national team. It was also an example of a player taking his opportunity when he wasn’t even supposed to play. Berhalter indicated after the match that Cannon was the first choice to start at right back against Haiti until an injury late in the week forced a change.

“Shaq got the notification that he was in the starting eleven hours before the game and to come in and have that performance… I think he made a great effort, and there’s more to come from him,” said the USMNT head coach.

“I had a bunch of emotions, but I just wanted to be ready and take advantage of it,” Moore said of his late entry into the lineup. “When you’re going through harder moments, when you’re not playing… that kind of stuff goes to your mind ‘Will you ever get back.’ But I like to say I trusted the process, working hard every day, and obviously when I got my chance I just tried to take advantage of it.”

Moore took his chance and gave Berhalter something to consider. That’s exactly what this Gold Cup is for.